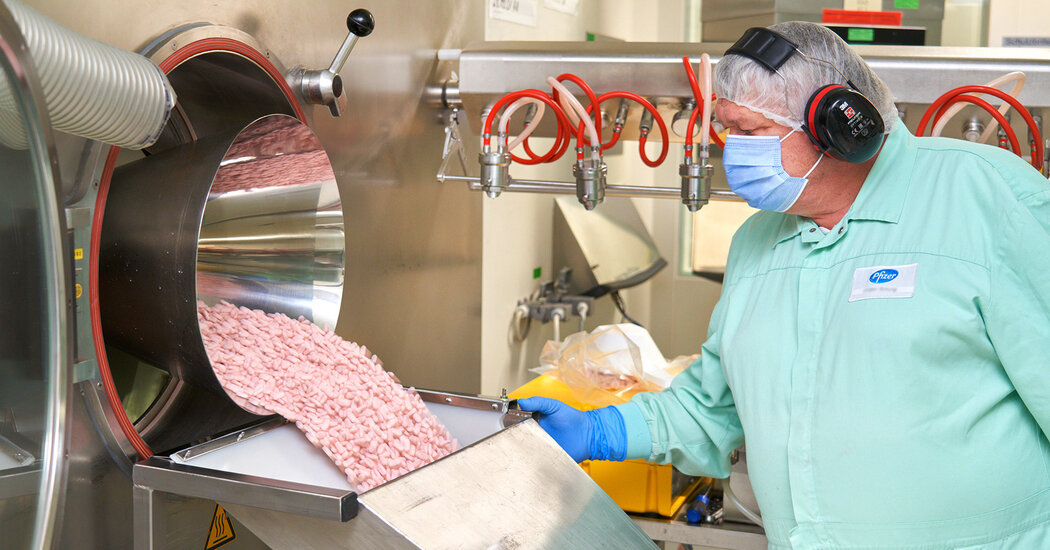 Pfizer has applied to the Food and Drug Administration for approval of its antiviral pill to treat unvaccinated people with Covid-19 who are at high risk of becoming seriously ill, the company said on Tuesday.

The drug, which will be sold under the brand name Paxlovid, may become available within weeks if authorization is given. It is intended to be handed out at a pharmacy and taken home.

Paxlovid is the second antiviral pill to show efficacy against Covid, in a new class of treatments for the disease that is expected to reach far more patients than other drugs usually given by infusion.

In an important clinical study, Paxlovid was found to significantly reduce the risk of hospitalization or death when given to high-risk unvaccinated volunteers shortly after they began to show symptoms. It seems to be more effective than a similar offer from Merck, known as molnupiravir, which can be approved as early as early December.

Both pills are aimed at elderly people or people who have obesity or medical conditions that put them at increased risk of becoming seriously ill from Covid.

A spokesman for Pfizer, Kit Longley, said the company is currently seeking authorization for the pill to be given only to unvaccinated people, but the company may submit changes to this provision later, depending on data from clinical trials.

Merck, who applied for authorization for molnupiravir last month, said it would be up to the FDA to decide whether the pill should be approved for use in vaccinated people as well as unvaccinated people.

The FDA has not yet said whether it will convene a meeting with expert advisers to recommend whether to approve Pfizer’s treatment. A panel of experts advising the agency on antimicrobial drugs is scheduled to meet later this month to discuss Merck’s drug.

The supply of Pfizer’s treatment, which is taken as a diet of 30 pills over five days, will initially be very limited. Pfizer said they could produce enough of the pills by the end of the year to treat 180,000 people. The company expects to expand production to produce at least 50 million treatment courses next year, including 21 million or more by the end of June.

Australia and the United Kingdom have already locked down some of these supplies. No supply agreement has yet been announced for the United States.

Pfizer said on Tuesday that it had reached an agreement to allow other manufacturers to make and sell the pill cheaply for use in 95 developing countries.

Pfizer’s drug is designed to stop the coronavirus from replicating by blocking the activity of a key enzyme that the coronavirus uses to replicate itself inside the cells. Merck’s pill works differently, by inserting errors into the virus’ genetic code, a mechanism that has raised concerns among some researchers that Merck’s drugs may trigger genetic mutations that cause reproductive damage. That difference can give Pfizer’s pill an advantage among doctors and patients, because it does not have the same safety concerns as the Merck pill.