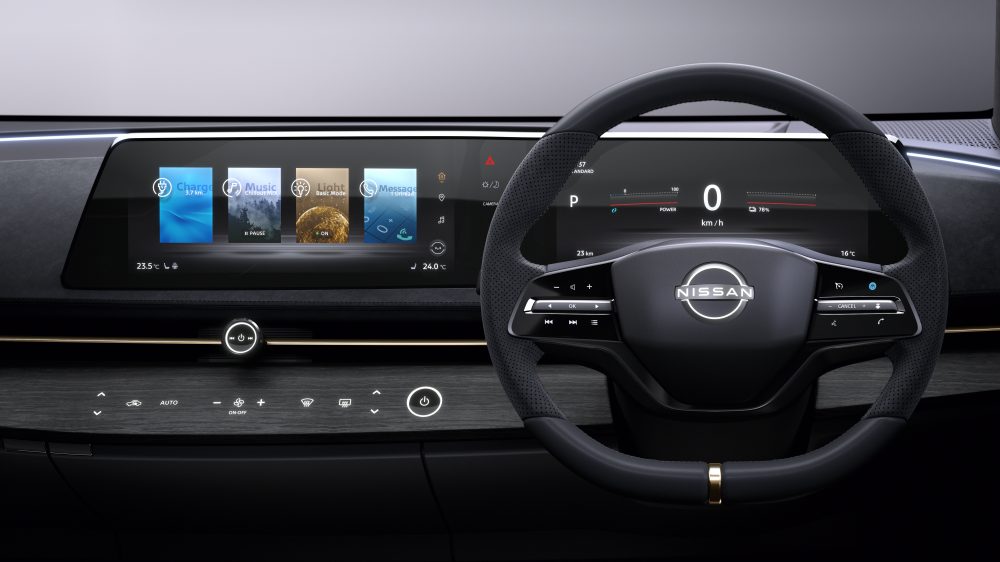 Nissan has shown a closer production version of their upcoming electric crossover based on the IMx concept earlier today at the Tokyo Motor Show. The new vehicle is called "Ariya", and while Nissan still calls it a "concept", it appears to be a name, as the car is expected to go into production soon.

Today's presentation focused more on design than specifications, although the crossover is rumored to ship to the United States in late 2021 at a "mainstream price point" and has 300 miles of range and a time of 0-60 in less than 5 seconds. It is expected to be similar in size to the Nissan Rogue.

Nissan also stated today that Ariya will have a dual-engine drive configuration and that it will be compatible with their Nissan Energy vehicle-to-grid plans.

These specifications would place Ariya in the realm of the upcoming Tesla Model Y in terms of specifications, even though they were released about a year after Tesla's planned crossover.

Ariya may also have been inspired by Tesla's minimalist interior design, because it has far fewer physical controls than most of Nissan's stables. The only physical controls are the start button, a button to operate the car's 1[ads1]2.3-inch screen and climate controls. Other controls use haptic touch and are placed on the car's dashboard.

Nissan's ProPILOT 2.0 driver assistant technology will be available on Ariya. The latest version of this technology "enables hands-off driving while driving in a given lane."

At the same press conference, Nissan showed their IMk concept, a single EV-Japan that fits the "kei car" small urban car aesthetically. But that concept was unchanged from the previous unveiling. You can watch the full (brief) press conference below:

Nissan has been involved in EVs since very early, with Nissan Leaf even hitting the Tesla Model S on the market. During that time, Nissan Leaf has sold more units than any other electric car.

But since its original Leaf release, Nissan has stagnated offering new models. Other than a few concepts here and there, the only electric vehicle Nissan has offered is the e-NV200, which started shipping in Japan, Hong Kong and Europe, but is not available in North America.

So it's great to see Nissan getting closer to production on another EV for the US market finally. Leaf is a great package, especially for the price, and has rightly done well in its segment as many direct competing cars just don't seem as serious or well thought out.

The design for Ariya, in my opinion, is quite amazing for a "crossover". Fortunately, it leaves many of the ridiculous design elements of the IMx concept on which it is based, resulting in a design that is aggressive, but still familiar. I would set it up against I-Pace in attractiveness, frankly.

We don't know what the final specifications will look like, or whether Ariya will look as it does in today's reveal, but nothing about it screams "this is just a concept car," and instead everything we know about it quite realistic.

If all this is true, we can't wait to see it hit the road. From what we know so far, and if they can handle a good price, it should be a solid entry into the market. Of course, everything can be changed before production.

Let us know what you think of Ariya in the comments below. And enjoy a gallery of high-resolution images of the car here: