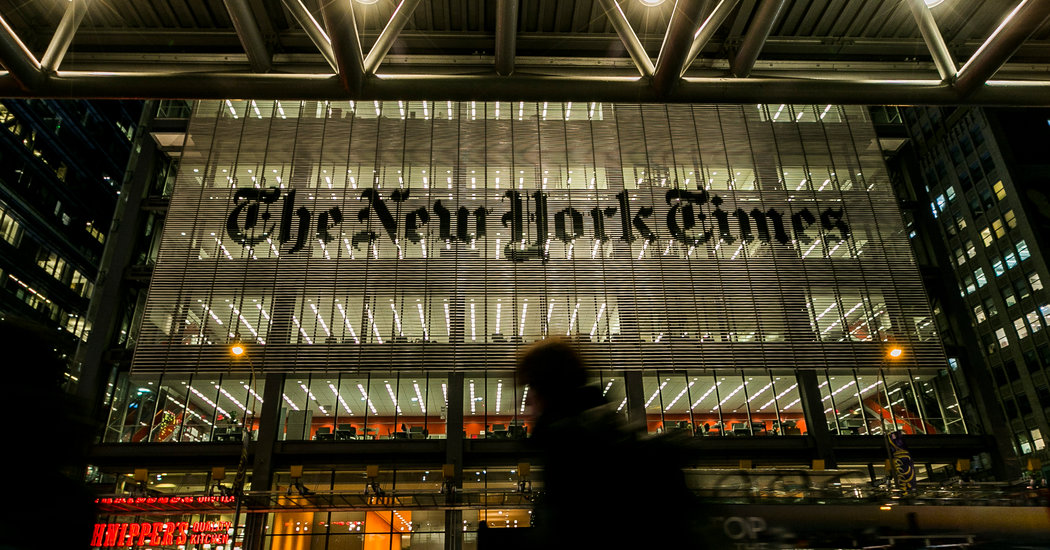 On Wednesday, the New York Times Company reported the first-quarter results that were better than expected, as the gains in digital advertising and subscriptions exceeded the relentless downturn in its once-powerful printing business.

The total number of paid subscriptions, including digital and printing, peaked at 4.5 million, a high. More than 3.5 million people pay for the publisher's electronic products, and the company adds 223,000 customers for its news, crosswords and cooking app in the quarter, an increase of 29 percent over last year.

Revenue generated by electronic advertising was a bright spot. It increased by 19 percent to $ 55 million, helped by the company's podcasts, especially "The Daily." Revenue from the paper's digital subscription and advertising business increased by 16 percent to $ 165.4 million. (The company does not describe specific figures for its podcast business.)

The company's future hinges on digital growth as a printed newspaper becomes a specialized product for an ever-shrinking base of readers.

The Times has made steady progress as an online publisher. Last year, it generated more than $ 709 million in digital revenue, making the company likely to face a stated $ 800 million target by 2020. Earlier this year, Mark Thompson, general manager, set another high goal: increasing the number of subscribers more than 10 million by 2025.

"We had another strong quarter, and we continue to optimize our business to deliver on our goal," he said in a statement.

The company sees positive results at a time when newspapers nationwide have suffered. Last week, the majority of The Times-Picayune news personnel in New Orleans were fired after the paper was purchased from Advance Publications by a competitor's publication in Louisiana, The Advocate. Gannett, publisher of USA Today and 100 other newspapers, has posted journalists across the country and deviates from a hostile takeover bid.

Digital news organizations have also struggled in recent months. BuzzFeed joined 15 percent of its workforce, Verizon announced a 7 percent cut to its media departments, and Vice Media eliminated about 10 percent of its employees.

At The Times, costs have continued to rise, partly due to increased marketing spend to help advertise digital subscription products. The company spent $ 47.5 million on marketing during the first quarter, a 50 percent jump over the same period last year. It will probably continue.

The company's practice of offering heavily discounted campaigns has attracted new subscribers, but has also lowered the contribution of each customer. In the first three months of the year, individual subscribers to the core business generated on average $ 11.94 in monthly revenue, significantly lower than $ 14.95, which the publisher recorded per customer in the same period three years ago. Subscribers to the crossword and cooking apps, which are sold separately, have paid a steadier rate.

Former executives said they expected the average price of subscription revenues to fall modestly as part of the company's overall strategy to reach 10 million subscribers after 2025. To do so, the company must sign up for an average of 203,000 new customers each quarter.

Since the so-called Trump Bump in late 2016, when The Times booked a record number of subscribers after the election of Donald J. Trump as president of the United States, the company has generated an average of 200,000 subscribers every quarter. Maintaining this growth rate will be challenging.

Major news events continue to be the driving force behind new readers, says Thompson on a earnings call with analysts Wednesday, and The Times plans to invest more in the press room. [19659002] "The mission of this company is to deliver great journalism to the world," Thompson said. "We attribute the latest success of our digital strategy to the fact that this mission drives everything we do – including our investment decisions."

The company separately announced the debut of a new site, Parents, targeting "parents who want help to have and raise children today." The site is meant to be a stand-alone service such as Times Crossword or Cooking apps, and The Times aims to make it another subscription product.

As The Times digital businesses are growing, the publisher's printing operation continues to diminish. Print advertising fell 11.9 percent, to $ 69.5 million, and print subscription revenues dropped 2.6 percent to about $ 161 million.

Operating profit for the first three months was $ 34.6 million, corresponding to the same period last year, while total revenue increased 6.1 percent, to $ 439 million. Wall Street investors had expected an operating profit of $ 27 million on revenue of $ 436.5 million.

Last week, the company's shareholders elected two new board members. Amanpal Bhutani, an executive with Expedia, joined the board in September and was elected by shareholders on May 2. David Perpich, a fifth generation member of the Ochs-Sulzberger family who controls The Times, was also elected to the board last week. He runs the paper's recommendation site, Wirecutter.

Herr. Perpich is part of a trio of family members who lead the paper. He is a cousin of the publisher A.G. Sulzberger and Sam Dolnick, an assistant managing editor who has helped Spearhead The Times video effort. Mr. Dolnick is one of the leaders behind the company's upcoming television series, "The Weekly", which will fly on FX and Hulu in June. The effort is seen as a way to capitalize on the success of "The Daily" and expand the paper's journalism to television and streaming.