Navigates in the new pickup system at LAX 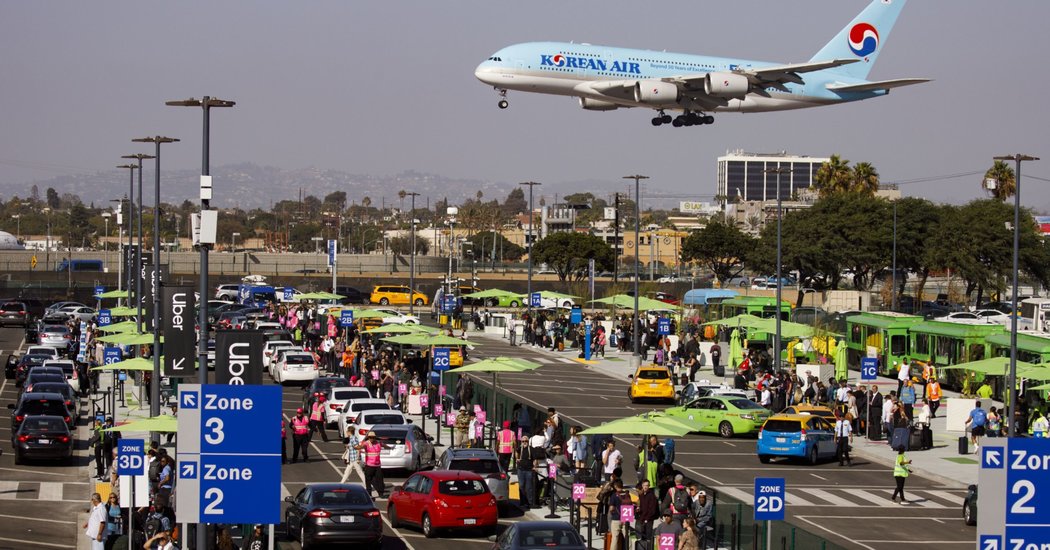 (If you don't already get California Today by email, here's the signup .)

Few things unite Californians – or really anyone who has ever been to LAX – quite like complaining traffic at LAX.

Last week, however, travelers were introduced to a new part of the Los Angeles International Airport experience that has sent the usual gripe to overdrive.

Search "LAX" on Twitter and you would think that some kind of Thunderdome had opened just east of terminal 1. The words "chaos" and "nightmare" are often displayed.

But, no: LAX-it – pronounced, for what it's worth, "LA exit" – is just the expansive new party where you have to grab Lyft, Uber or taxi, since almost all take-out shares and taxi pickups now is forbidden.

The relocations, airports officials have said, are part of plans to alleviate traffic while construction continues on an automated people relocation set to start in 2023 – ideally well ahead of the 2028 Olympics. [19659006] Predictably, LAX-it's opening days are rough. The Los Angeles Times reported that travelers and drivers were furious over hour-long wait and mass confusion Tuesday, the party's opening day.

On Sunday, after boarding an early morning flight from Florida, I joined the hordes of wandering. I survived.

When I was somewhere over Texas, I checked the airport's Twitter, which has started publishing average waiting times for Lifts, Ubers and taxis. The wait was only a few minutes, but extended as the day went on.

Getting to the party was okay. Outside the luggage door, a green shuttle arrived within about a minute. The drive through the central terminal loop to the lot took about 10 minutes.

In the party itself, workers chirpily offered water bottles and instructions. Two food trucks were open nearby, although most were heading straight for the cab lines. A few people sat under lime-green umbrellas on benches and charged their phones at kiosks.

I met Michael Christensen, the airport's Deputy Chief Executive of Operations and Maintenance, near where handlers had arranged with Eve and The Dude, a couple of lovely English settlers working as therapy dogs.

Mr. Christensen told me that conditions had improved significantly since Thursday night, but that employees were watching closely for waiting times and adjusting traffic routes to better keep things moving.

He emphasized that traffic was moving through the top-level escalator areas – where drivers of ride-share before picking up passengers – about 35 percent faster.

As such, he said, frustration was not unexpected.

"We monitor social media," he said, "which takes a strong stomach."

Still, Chance Bonner, a 39-year-old from San Antonio, said the chaos seemed more organized than he last landed at LAX about a month ago.

"This is easy compared to driving in LA," he said with a grin.

When I had finished talking to travelers around 10am. 13, I stood in line for about 15 minutes before being matched with a Lyft driver. (Unlike at SFO or La Guardia, riders are matched with a driver using a PIN – mainly so travelers can get through on a first-come, first-served basis.)

For his part, my driver described the situation as "a mess," but one he said had improved since last week.

About half an hour later, we were stuck in bumper-to-bumper traffic on Highway 110, anyway.

Here is the airport's LAX-it guide, complete with contact information if you have any questions. Good luck.

Here's what else you may have missed over the weekend

We often link to sites that restrict access for non-subscribers. We appreciate you reading the Times coverage, but we also encourage you to support local news if you can.

The San Francisco Chronicle reported that the president also posed a threat to withhold federal aid that was almost identical to one he made last year after the deadly camp fire.

Mr. Newsom replied to President on Twitter, saying: "You don't believe in climate change. You will be excused from this call. "

Here is more about how scientists started that camera network . [ The New York Times ]

California Today goes live at 6:30 Pacific time weekdays. Tell us what you want to see: CAtoday@nytimes.com . Have you forwarded this email? Sign up for California Today here.

Jill Cowan grew up in Orange County, graduating from the U.C. Berkeley and has reported across the state, including the Bay Area, Bakersfield and Los Angeles – but she always wants to see more. Follow here or on Twitter, @jillcowan .

California Today was edited by Julie Bloom, who grew up in Los Angeles and graduated from the U.C. Berkeley.