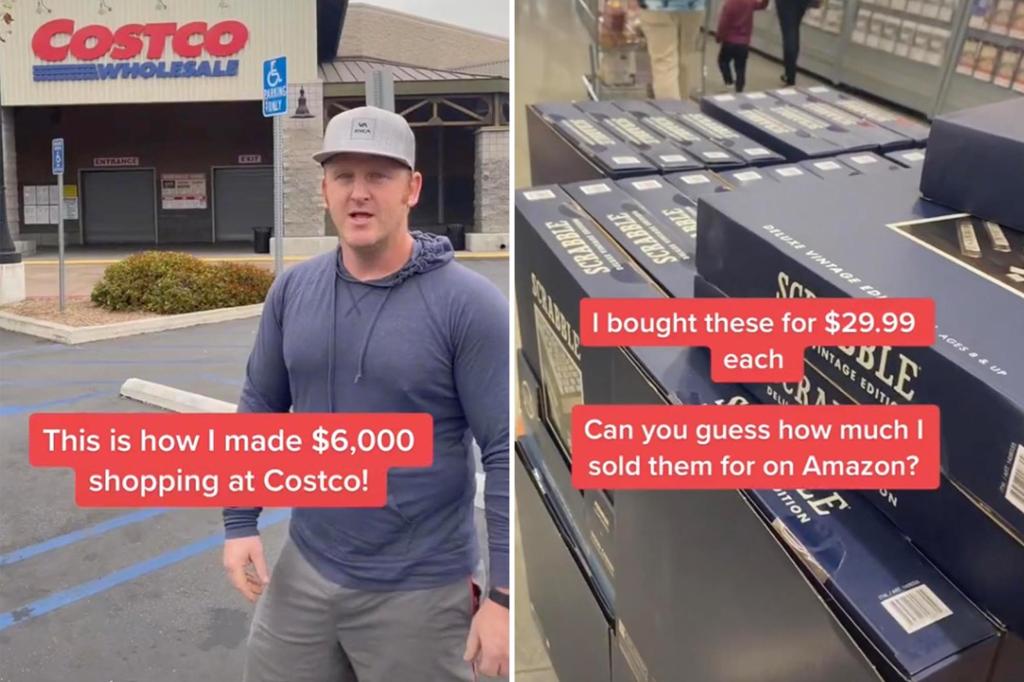 He made Scrabble a “monopoly.”

Not only can people save money at Costco, apparently they can make a ton of money too. A California TikTok influencer claims he makes $6,000 in a single trip to the store by buying and reselling a vintage Scrabble game.

A video detailing his system “gaming” side hustle currently has thousands of views on TikTok.

“This is how I made $6,000 at Costco,” reads the caption of the clip, which was posted by WeFlipItAll, a retail arbitrage firm that teaches people how to make tons of cash selling items on Amazon. Accompanying footage shows We Flip It All̵[ads1]7;s founder in the Costco parking lot “waiting for the store to open” so he can launch his retail-to-riches scheme.

According to the tutorial, the enterprising fellow bought the Monopoly Scrabble Deluxe Vintage Wood Game Set With Lazy Susan in bulk for $29.99 each. He then sold the unopened games on Amazon for $100 to $120 each, making more than $6,000 in profit, according to the clip.

And while it’s unclear exactly how the retailer made the game and fortune — he smartly saves it for his Los Angeles-based company’s online course — he explained in other videos how he uses Amazon FBA (Fulfillment by Amazon). This service allows business owners to send “their products to Amazon fulfillment centers, and when a customer makes a purchase” they “pick, pack and ship the order,” per the site.

“We can also provide customer service and process returns for these orders,” explains the e-commerce giant.

Using FBA, aspiring entrepreneurs can buy cheap items on other sites, rebrand them, and then sell them on Amazon for a much higher price, effectively making thousands of dollars from home with minimal effort.

Of course, as with all get-rich-quick schemes, there are a few caveats to Costco’s side hustle. First, it requires a store membership with the lowest tier costing users $60 per month.

Additionally, the individual Amazon seller plan costs 99 cents per unit sold, while the professional plan nets users $39.99 each month, regardless of how many items they sell, per Amazon. Therefore, it probably only makes sense if people sell 40 or more items per month.

While Amazon does the legwork for packaging and shipping, additional sales, shipping and FBA fees may apply.

Despite the potential hurdles, many people are struggling to find side hustles in light of the current inflation crisis, which saw consumer prices jump 8.2% year-on-year last month.

Last week, a TikTok went viral after describing how people can make $180,000 a year by donating poop to science – literally turning shit into gold.