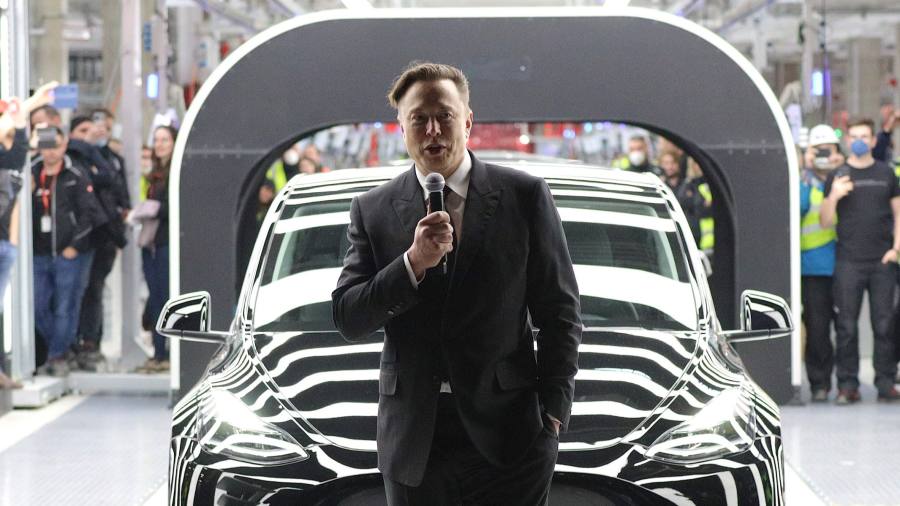 For much of this year, as other growth stocks collapsed, Tesla seemed to defy gravity. The bulls complained that shares of Elon Musk’s electric car maker suffered because of his offer on Twitter. But as recently as three months ago, with the stock down just 25 percent from its peak in November 2021, it was still possible to believe it would escape the worst carnage.

Not any more. A torrid December has cut more than 40 percent from Tesla’s shares, leaving them two-thirds lower than their late September levels. Before a partial rebound early Thursday, Tesla̵[ads1]7;s market value had fallen to $355 billion, a staggering drop of nearly $900 billion from its peak in 2021.

It is easy to find reasons for this sale at a time when growth is out of fashion on Wall Street and the car industry faces an uncertain 2023. But Musk himself must take some of the blame. Whether due to hubris, carelessness or just plain boredom with the day job, his personal missteps have acted as a catalyst for his decline.

One is the mismanagement of his own great public persona. Musk likes to claim that his presence on Twitter has been of immeasurable value to Tesla shareholders. On the way up he had a point. It was a megaphone that helped cement him in the public consciousness as the world’s foremost maverick entrepreneur, even if it led to unpleasant public pushback and a clash with regulators.

But as he’s caused chaos and polarization on Twitter in the two months since taking over, his personal brand — and by extension, Tesla — has been tarnished.

Another misstep was taking the company’s high shares for granted. Turning attention to Twitter at a moment when the auto industry appears to be on the brink of a downturn, and as serious competition in electric vehicles is finally starting to pick up, looks like seriously poor judgment, even if it turns out to be just temporary.

Musk also seems to have believed he could treat his Tesla stock holdings as a piggy bank. He began selling two days after the stock peaked and has continued to dispose of just under $40 billion of his stock, continuing to sell even after he said he would stop (a comment he repeated last week). With his current stake in Tesla now worth $51.7 billion, the divestitures look significant.

Actions like these help explain how the stock market spell that Musk managed to spin around himself and Tesla has been broken. And where emotion has retreated, rational analysis has stepped in to provide ample justification for a wild reappraisal.

For many, it has been possible to believe that Tesla was on the verge of taking the lion’s share of a giant market for new electric cars that was about to open up. But as Musk warned on Twitter last week, higher interest rates and an uncertain economy point to a tough period ahead. With customer waiting lists falling sharply in Tesla’s two biggest markets, the US and China, the duration of demand has replaced supply for the first time as the biggest concern for the company’s investors.

Tesla had already warned in October that inventory levels were likely to rise further this quarter as production outpaced deliveries, and that profit margins would once again be under pressure. This month, it began offering $7,500 in incentives for anyone who receives a Model 3 or Model Y before the end of the year.

All of this comes as Tesla gets closer to the crossroads that all growth stocks eventually reach. Sustaining the rapid expansion that Musk has promised is starting to look challenging without taking measures that would eat into the profits Wall Street now expects.

Over the past two years, the 30 percent gross margin on Tesla’s auto business (at least until higher costs crept in this spring) was about double that of Ford and General Motors, and comfortably above Toyota’s 19 percent. Seeking to maintain margins could further eat into the growth stock valuation that still supports the company, even after the slide.

None of this detracts from the incredible success Tesla can demonstrate as it closes out another year of growth that other automakers could only dream of. But a stock market value that is twice that of Toyota and a share price of 30 times this year’s expected earnings still leaves room for further disappointment.