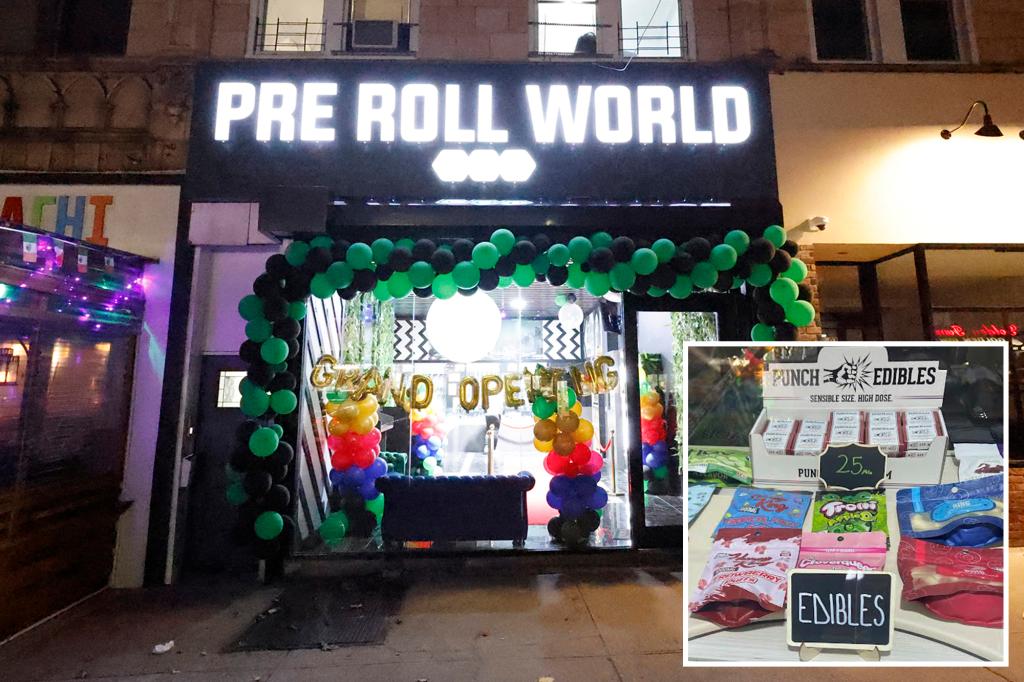 Kew Gardens is turning into Weed Gardens – with another unlicensed cannabis shop brazenly opening up in the tidy Queens borough.

The illegal marijuana shop, dubbed “Pre-Roll World,” launched its grand opening on Metropolitan Avenue two days ago with a lot of, um, buzz.

“I do not get it. They don’t have a license. The city is not doing anything about it, said Kew Gardens community activist Sylvia Hack, a member of Community Board 9.

Hack said Community Board 9 will discuss the proliferation of such illegal cannabis shops, which have sprouted up along local commercial strips without fear of repercussions.

Dominick Pistone, president of Kew Gardens Civic Association, added: “At best they run away. At worst, they are illegal.

He said he will discuss the black market with the NYPD̵[ads1]7;s 102nd Precinct.

A Post reporter walked into the store Sunday and bought a package of STIIIZY edible “Cannabis-infused Gummies” for $30. The store only accepted cash.

The store – decorated with hordes of colorful balloons and inflated gold letters that read “GRAND OPENING” – offered a cornucopia of cannabis delights. There were pre-rolled joints, a multitude of different levels of flowered marijuana, vapes, oils, and a variety of edibles.

Almost all the products had a California label, which claimed they were grown or produced in the Golden State.

Under New York’s “seed for sale” law, cannabis products sold here must be grown and produced in the Empire State.

Workers at the store claimed the company that owns Pre-Roll World had applied for a state license.

The state recently awarded the first 36 licenses in New York to sell cannabis: 28 to dealers and 8 to not-for-profit groups. None have yet opened and their locations have not even been identified.

Critics say the rollout of New York’s cannabis program is shaping up to be a bad trip.

A study released last week claimed there are “likely tens of thousands of illegal cannabis businesses” currently operating out of bodegas, smoke shops and other retail spaces in New York City — with some pop-up shops selling bad or dangerously tainted weed, a new study reveals .

Meanwhile, the Cannabis Social Equity Coalition said the first legal sellers are not adequately trained for the market and will face a mountain of debt.

New York regulators have also come under fire after revelations emerged that former NBA star Chris Webber, tapped by the state to help raise $200 million in a public-private partnership for the fledgling legal weed industry, have not been able to raise money.

The Office of Cannabis Management has defended the rollout of the program.