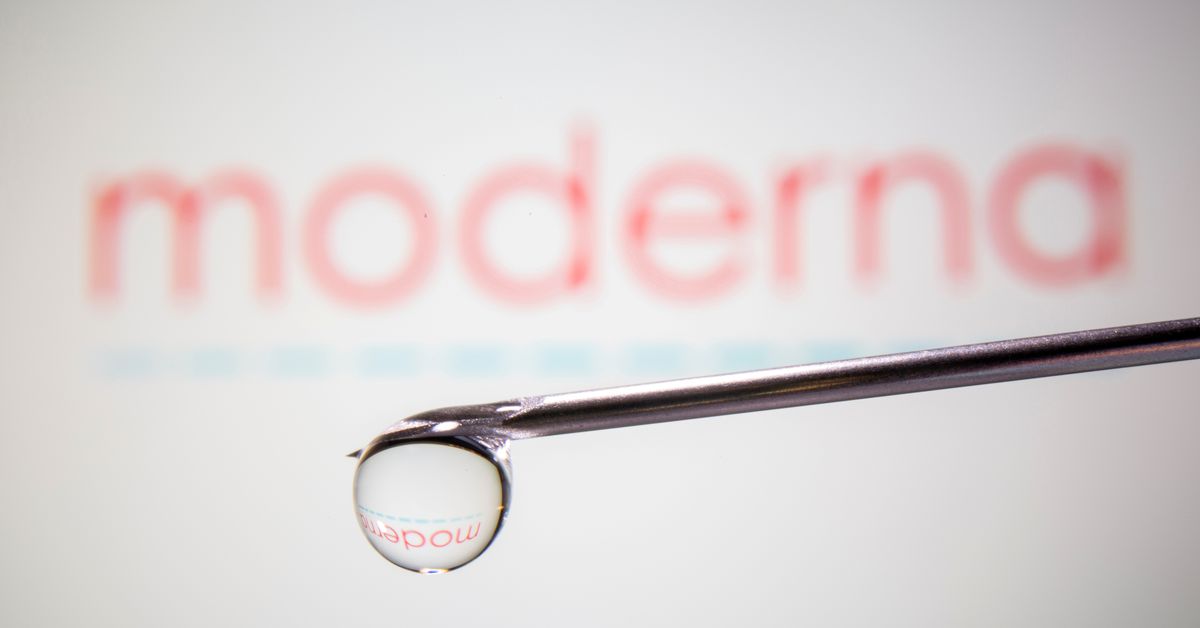 Moderna’s logo is reflected in a drop on a syringe needle in this illustration taken November 9, 2020. REUTERS/Dado Ruvic/Illustration

Aug 26 (Reuters) – Moderna sued Pfizer and its German partner BioNTech on Friday for patent infringement in the development of the first COVID-19 vaccine approved in the United States, alleging they copied technology that Moderna developed years before the pandemic.

The lawsuit, which seeks unspecified monetary damages, was filed in US District Court in Massachusetts. In a press release on Friday, Moderna said the lawsuit will also be filed at the regional court in Düsseldorf, Germany.

Contacted by Reuters, a spokesperson for the Düsseldorf court said: “I cannot at the moment confirm the receipt of such a claim.”

“We are filing these lawsuits to protect the innovative mRNA technology platform that we pioneered, invested billions of dollars in creating and patented in the decade before the COVID-19 pandemic,” Moderna CEO Stephane Bancel said in the press release.

Moderna said the lawsuit was not intended to prevent people from getting vaccines.

Moderna Inc ( MRNA.O ), alone, and the partnership between Pfizer Inc ( PFE.N ) and BioNTech SE ( 22UAy.DE ) were two of the first groups to develop a vaccine against the new coronavirus.

In an emailed statement, a Pfizer spokesperson said: “Pfizer/BioNTech has not yet fully reviewed the complaint, but we are surprised by the litigation given that the COVID-19 vaccine was based on BioNTech’s proprietary mRNA technology and developed by both BioNTech and Pfizer .”

“We remain confident in our intellectual property supporting the Pfizer/BioNTech vaccine and will vigorously defend against the allegations in the lawsuit,” the spokesperson said.

BioNTech did not immediately respond to separate requests for comment.

Just a decade old, Moderna, based in Cambridge, Massachusetts, had been an innovator in messenger RNA (mRNA) vaccine technology that enabled the unprecedented speed of development of the COVID-19 vaccine.

An approval process that previously took years was completed in months, thanks in large part to the breakthrough in mRNA vaccines, which teach human cells how to make a protein that will trigger an immune response.

Germany-based BioNTech had also worked in this field when it partnered with the American pharmaceutical giant Pfizer.

The US Food and Drug Administration granted emergency use approval for the COVID-19 vaccine first to Pfizer/BioNTech in December 2020, then a week later to Moderna.

Moderna’s COVID vaccine — its only commercial product — has brought in $10.4 billion in revenue this year, while Pfizer’s vaccine brought in about $22 billion.

The lawsuit is likely to take years to play out, according to Cowen & Co analyst Tyler Van Buren.

Moderna alleges that Pfizer/BioNTech, without permission, copied mRNA technology that Moderna had patented between 2010 and 2016, well before COVID-19 emerged in 2019 and exploded into global consciousness in early 2020.

Early in the pandemic, Moderna said it would not enforce its COVID-19 patents to help others develop their own vaccines, particularly for low- and middle-income countries. But in March 2022, Moderna said it expected companies like Pfizer and BioNTech to respect its intellectual property rights. It said it would not seek compensation for any activity until March 8, 2022.

Patent litigation is not uncommon in the early stages of new technology.

Pfizer and BioNTech are already facing several lawsuits from other companies that say the partnership’s vaccine infringes their patents. Pfizer/BioNTech has said it will vigorously defend its patents.

Germany’s CureVac, for example, also filed a lawsuit against BioNTech in Germany in July. BioNTech responded in a statement that the work was original.

Moderna has also been sued for patent infringement in the US and has an ongoing dispute with the US National Institutes of Health over rights to mRNA technology.

One involved an mRNA structure that Moderna says researchers began developing in 2010 and were the first to validate in human trials in 2015.

“Pfizer and BioNTech took four different vaccine candidates into clinical testing, which included options that would have steered away from Moderna’s innovative path. However, Pfizer and BioNTech ultimately decided to proceed with a vaccine that has the same exact mRNA chemical modification of the vaccine .” Moderna said.

The second alleged infringement involves the coding of a full-length spike protein that Moderna says its researchers developed while creating a vaccine for the coronavirus that causes Middle East Respiratory Syndrome (MERS).

Although the MERS vaccine never made it to market, the development helped Moderna quickly roll out its COVID-19 vaccine.