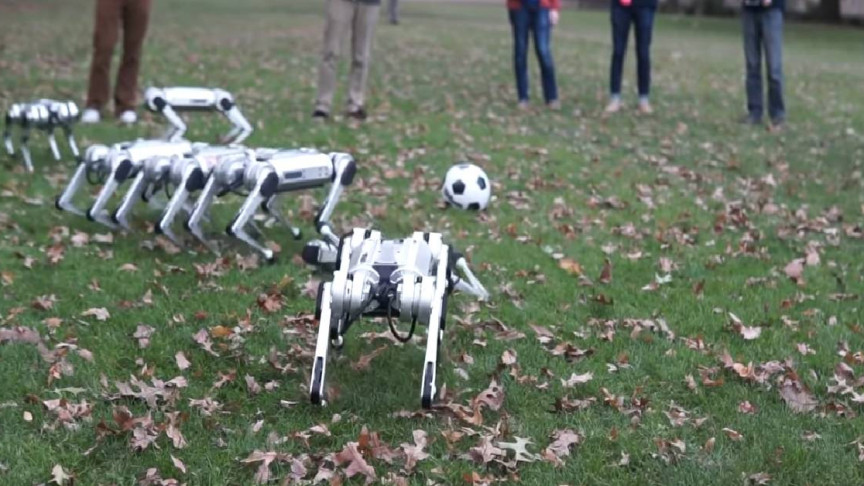 It's autumn in the US, the perfect time to bring your dog to play. That's exactly what some MIT scientists did, only the dogs were robots.

RELATED: THIS CHEETAH ROBOT CAN CLIMB STEPS AND AVOID OBSTACLES WITHOUT SEEING ANYTHING

MIT's Biomimetic Robotics Laboratory has built what it calls mini. These dog-like robots can run, fly back, play football and even hide under piles of leaves.

They are 9 kilos four-legged robots powered by 1

2 engines and are touched by scientists using an RC-like controller. They can reach speeds of around 5 mph (2.2 meters per second) and they are adorable.

However, they were not inspired by dogs, but rather by cheetahs. "My hobby was watching cheetah videos on YouTube," said MIT, associate professor of mechanical engineering Sangbae Kim, CNN .

The mini cheetahs are quite a technical work. "People don't realize how difficult it is to stay balanced," Kim explained.

To stay upright, the mini-cheetah must make more than 30 decisions per second. And while it may seem like backflipping would be the hardest thing for this robot to do, Kim stressed that it was the landing that was the true fight.

Playing football, romping and moving back is just the beginning of these little robots. The robotics team is constantly developing new algorithms that will see mini cheetahs equipped with new skills.

To upgrade their robots, they plan to send them to other universities to see what they can do with them. They are also considering adding cameras so the robots can navigate themselves.

And although the robots may one day be used for tasks such as elderly care or emergency preparedness, Kim says his current goal is to "achieve the same level of mobility as animals … as good as a dog following you around."