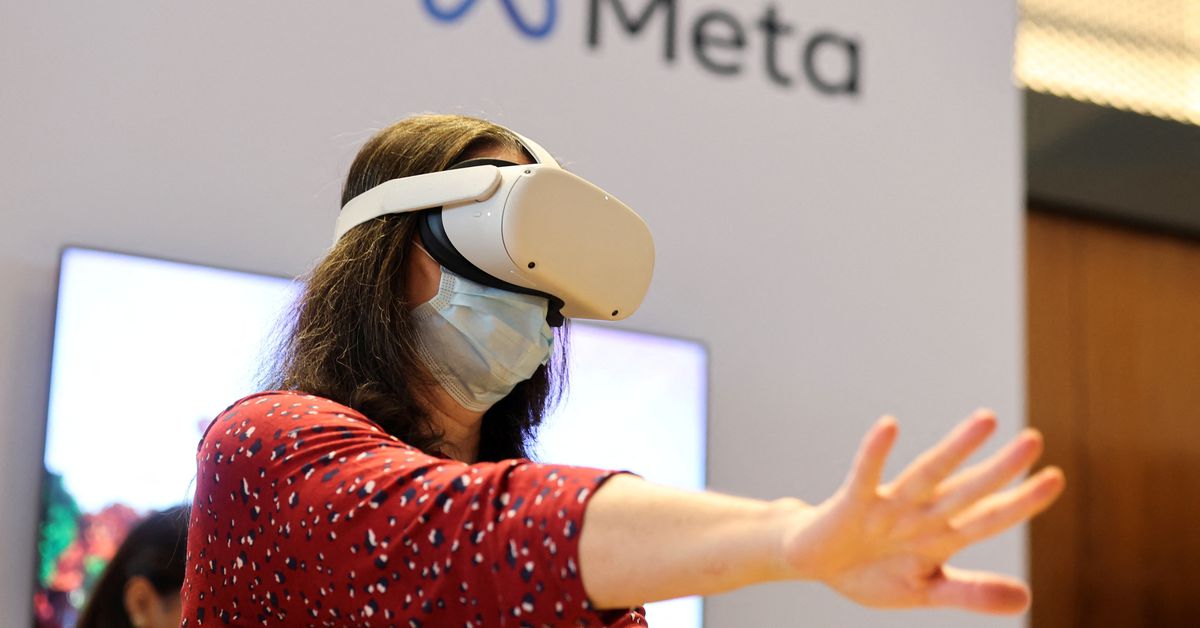 SAN JOSE, Calif./ WASHINGTON, Dec 8 (Reuters) – The Biden administration on Thursday accused Meta Platforms Inc ( META.O ) of trying to buy its way to dominance in the metaverse and launched a high-profile lawsuit to try to stop Facebook -the parent from buying virtual reality app developer Within Inc.

The FTC sued in July to stop the deal, saying Meta’s acquisition of Within would “tend to create a monopoly” in the virtual reality (VR) fitness app market. It has asked the judge to order a preliminary injunction that would stop the proposed transaction.

It will complement Meta’s existing virtual reality users, which tend to skew young and male, and be more focused on gaming, Dennis added.

“Meta could have chosen to use all of its vast resources and capabilities to build its own dedicated VR training app, and it planned to do so before acquiring Within,” Dennis said, pointing to a plan from early 2021.

She cited an email from CEO Mark Zuckerberg saying he was “bullish” on exercise and called the proposed partnership with Peloton “fantastic.”

Lawyers for Meta and Within argued that the FTC did a poor job of defining the relevant market, saying the companies compete with a variety of fitness content, not just VR-dedicated fitness apps.

Meta’s lawyers also disputed that plans for a Meta-owned VR fitness app had gone beyond low-level “brainstorming” and argued that the FTC underestimated competition in the market it had defined, citing the potential for fellow tech giants Apple Inc ( AAPL. O ), Alphabet Inc’s ( GOOGL.O ) Google and Bytedance to join the fray.

Rade Stojsavljevic, who manages Meta’s in-house VR app developer studios, testified that he had proposed the link between Beat Saber and Peloton, but did not develop a formal plan and never discussed the idea with either party.

Internal documents from early 2021 shown in court showed Stojsavljevic proposing acquisitions of VR developers before they could be “cannibalized” by competitors and discussing pressure from Zuckerberg to “get aggressive” in response to reports of a potential Apple headset.

The trial, scheduled for Dec. 20, will serve as a test of the FTC’s efforts to stave off what it sees as a repeat of the company buying up small up-and-coming rivals and effectively buying itself into dominance, this time at the beginning. virtual and augmented reality markets.

The FTC is separately trying to force Meta to exit two previous acquisitions, Instagram and WhatsApp, in a lawsuit filed in 2020. Both were in relatively new markets at the time the companies were acquired.

A government victory could reduce Meta’s ability to maneuver in an area of ​​emerging technology — virtual and augmented reality — that Zuckerberg has identified as “the next generation of computing.”

If Meta is blocked from making acquisitions in the space, Meta will face greater pressure to produce its own hit apps and would give up the gains – in terms of revenue, talent, data and control – associated with bringing innovative developers in-house.

Inside, Supernatural developed what it advertises as a “complete fitness service” with “expert trainers,” “beautiful destinations” and “workouts choreographed to the best music available.”

It’s only available on Meta’s Quest devices, which are headsets that offer immersive digital visuals and audio that market research firm IDC estimates capture 90% of global shipments in the virtual reality market.

The social media company agreed to buy Within in October 2021, a day after it changed its name from Facebook to Meta, signaling its ambition to build an immersive virtual environment known as the metaverse.

Zuckerberg will be a witness in the trial. Other potential witnesses include CEO Chris Milk and Meta Chief Technology Officer Andrew Bosworth, who run the company’s metaverse-oriented Reality Labs unit.

The trial is in the US District Court for the Northern District of California.

Focused on US antitrust as well as corporate regulation and legislation, with experience covering war in Bosnia, elections in Mexico and Nicaragua, as well as stories from Brazil, Chile, Cuba, El Salvador, Nigeria and Peru.