Man turned away to use counterfeit $ 20 bill opens fire on Church's Chicken, killed one and injured two 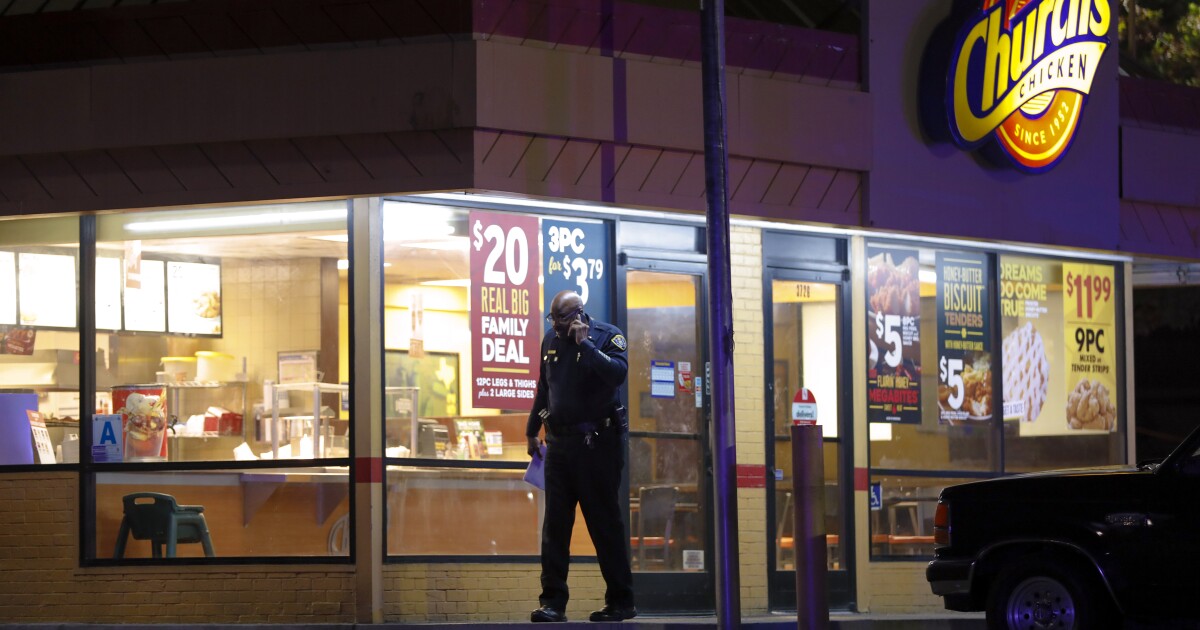 A man who was turned away from a chicken by Otay Mesa Church for trying to use a counterfeit $ 20 bill later returned and shot three staff members, one deadly, police and witnesses said.

Police are still looking for the gunman, who was described as a thin, black man in his 30s. He was about 6 feet tall and was last seen wearing a blue Chargers hat, red sunglasses, basketball shorts and a light blue sweater.

One of the employees, a 28-year-old woman, was rushed to a hospital where she died, police say. Two other employees were injured but are in stable condition. The victims were not identified.

The shooting happened around 5:30 pm. at the fast-food kitchen on the boulevards of Del Sol and Picador, a busy area close to shops, homes and a school.

A witness was filling a water tank at a dispenser outside a nearby 7-Eleven when the first shots rang out. He turned to Church's Chicken and could clearly see a man firing multiple shots at employees behind the counter.

The witness ran inside the convenience store with his wife and asked employees to call 911. He then ran over to the restaurant. All the victims were employees, he said.

Workers at the restaurant told the witness that the shooter was turned away after trying to make a $ 20 counterfeit purchase. He left and moved his car, but returned shortly after and opened fire.

The gunman was last seen leaving the restaurant in a blue car, heading north toward Picador, according to police.

The witness was not named because he fears retribution for sharing what he saw.

Dozens of police officers descended on the area and the restaurant was shut down. San Diego Police Chief David Nisleit was seen talking to investigators.

San Diego Police Captain Tom Underwood confirmed a switch between the gunman and the staff that triggered the shooting. He added that customers were inside the restaurant when the shooter opened fire, but no one was targeted or injured.

David Walker was also near the 7-Eleven when the gunfire began. He said he had just eaten at Church's Chicken and was sitting in his car waiting for his shift at the convenience store to start when he heard how it sounded like fireworks. People around the restaurant began to spread, and a vehicle in the driveway accelerated, Walker said.

Soon he saw the back door of the restaurant flying open. An injured employee stumbled outside and Walker rushed to help. He immediately took off the belt and wrapped it around the worker's injured arm. The employee may also have been shot in the side.

Residents living near the restaurant went to the site to learn more about what had happened. Many of them said they feel the neighborhood is generally very safe, despite occasional minor crime.

Anyone with information about the shooting was asked to call Crime Stoppers at (888) 580-8477.