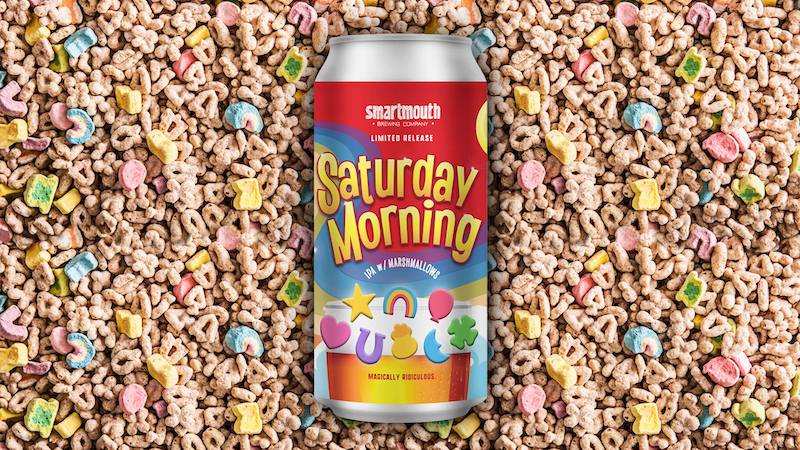 Smartmouth Beer, of Norfolk, Virginia will release their Lucky Charms-themed beer on March 2.

Remember how you used to sort through bowls of your favorite cereal to separate the marshmallows from the cereal? Whether you ate them first or saved them for the last time, we've covered you with our last beer.

Saturday Morning is a 6.6% ABV IPA, brewed with homemade roasted marshmallows and bulk dehydrated marshmallow pieces. It has been skipped and dried with Galaxy and Calypso hops. The nose is sweet and citrus, with orange and pear aromas. It has a soft pillowy body with a small cereal flavor. The result is magically ridiculous!

This is a very limited release beer. Drafts and boxes will be available on Saturday, March 2, starting at noon at the Norfolk Tasting Room. It will be distributed throughout the state of Virginia to limited restaurants, bars and specialty bottle stores.

Jason Weisberger is Boing Boing's publisher. Nemo is Jason's Great Pyrenees. You can find Jason on twitter on @jlw

As large companies are arguing with an ever-increasing amount of data, the applications are growing for deep learning – and so do the job opportunities. If you have a working knowledge of Python, all you need is the tools to start creating data for you. Speed ​​up the science and code behind the field […]

Everyone who really listens to vinyl knows that the medium is far from dead. But convincing others about their appeal can be an uphill battle. For one thing it is the equipment: A quality recorder plays much more space than a smartphone packed with thousands of streaming songs in clear. But here's […]

More and more software companies are using DevOps methodology to better integrate their development and operating groups. Essentially, it's a system of tools and philosophies that get a whole staff on the same page. The result: Better code, delivered faster. If you want to learn how, DevOps Certification Training is Master Class Bundle a […]