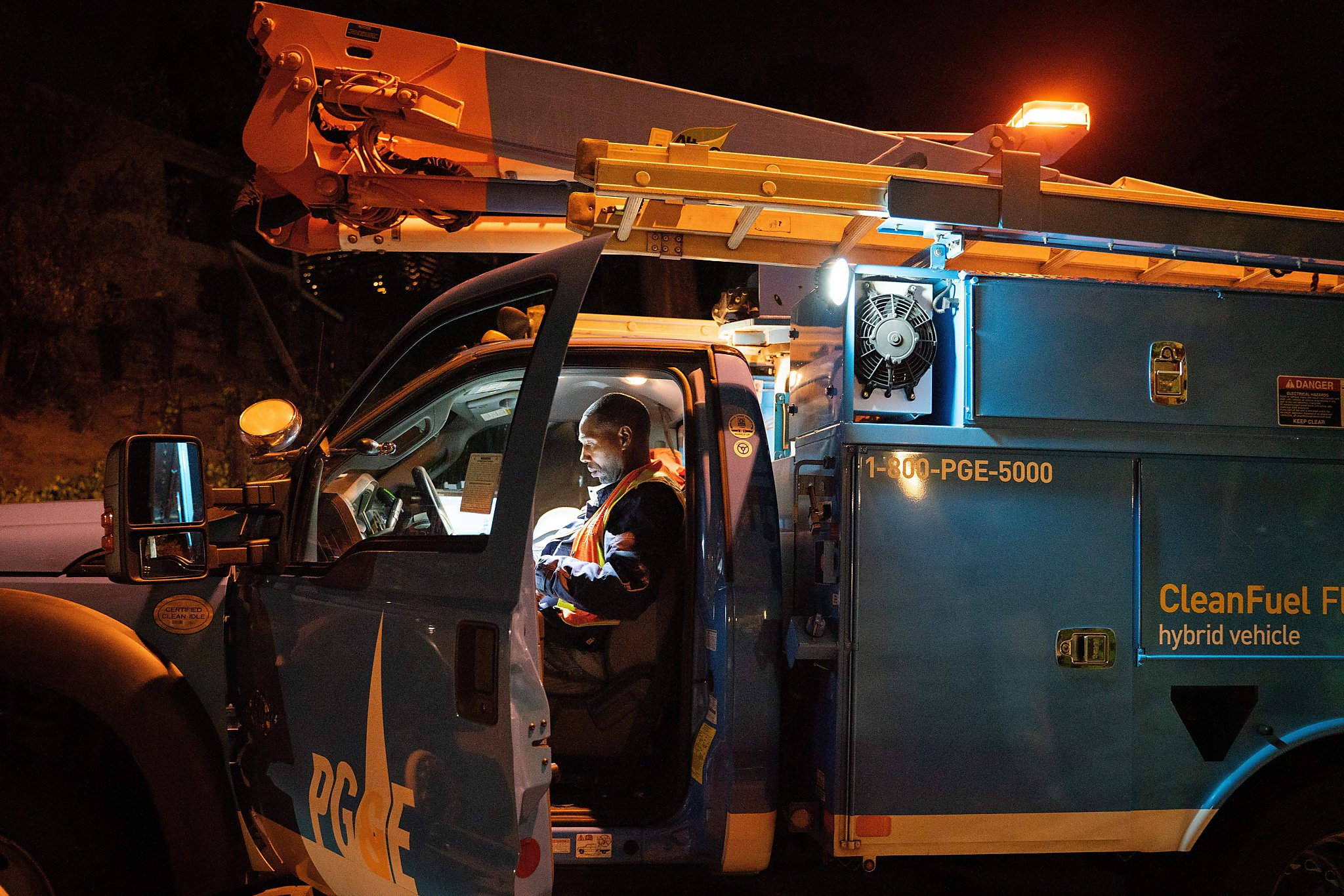 Recent development of fires around the region and PG&E power outage. Learn when the power can be turned back on. find out which schools are closed here; get complete details about Kincade Fire; and look at the effect of power outages on Northern California here.

11:08 am PG&E explains why power outages lasted longer than planned: "We have had some operational challenges that have made restoration for our (October 26) event more than previous events," said Lynsey Paulo, a spokeswoman for PG & E. “We had several transmission lines in this (shutdown) event. Air controls were delayed due to smoke in the air. Distribution lines cannot be restored until everything is clearly given on the transmission lines that feed them. ”

1:05 am Calistoga schools cancel classes for the week: Calistoga city officials said in a notice that there will be no school for the rest of the week.

10:49 PG&E restores power to 59% of customers affected by previous closures: A spokeswoman for the utility said that from 9am, officials had restored power to 571,481 homes and businesses of 970,000 who lost power.

As of 10:15, PG&E shows approximately 11,300 customers who are still without power in Contra Costa County due to #PSPS .

10:18 Fairfax police kept in darkness, literally and figuratively: A text alert from the police department said they were not receiving a power outage in PG&E.

Robot text from Fairfax Police: "Power still out. NO words from PG&E if Fairfax is is [sic] part of today's PSPS, but the assumption is that we are." This is like a whole city in California that doesn't know what's going on with its power because the power company won't say.

#PSPS : For safety's sake, PG&E began turning off power to parts of Marin County at 8am. October 29 to reduce the risk of fire. This is earlier than estimated due to dynamic weather environment and impact on our Kincade Fire transmission system https://t.co/6nUvJxjxyF pic.twitter.com/JBvlYjE5Eo

Firefighters in New Mexico are on their way to California to assist with ongoing management and containment of wildfires. Today and every day, I am grateful to our first responders who experience the opportunity in an emergency – be safe, and as always, thank you for the service. #NMgov https://t.co/RH2WPFtmJJ Tu1919900900— Michelle Lujan Grisham (@GovMLG) October 29, 2019

09:25 Officials ask for patience: Fire officials ask who are affected by the fire of being patient and alert, as their priority is to get through strong winds Tuesday night through Wednesday.

09:24 Code Blue Warning in Temporary Freezing Fire Zone: Sonoma County Supervisor David Rabbit said Sonoma County is under a "code blue" warning of overnight temperatures below freezing. He urged people not to sleep in their cars.

09:09 Kincade Fire still on 75,000 acres and 15% contained: Cal Fire officials said firefighters support a challenging afternoon and evening, with wind expected to pick up in North Bay hills. A National Weather Service meteorologist said the winds have started to pick up in the North Bay mountains with gusts of up to 35 mph. Trees will be weakened by wind and can be broken by strong gusts, which can potentially affect the travel paths.

09:07 Two firefighters injured and fighting Kincade Fire: One of the firefighters was flown to UC Davis Medical Center and was listed in stable condition, according to a Cal Fire official who spoke at a morning news conference .

09:04 Grizzly Fire continues to burn in Solano County marsh: The Grizzly Fire, which air quality and weather officials say is the main source of the sharp smoke in East Bay, has consumed about 2,000 acres, but burns in marsh and threatens no structures, according to firefighter Ken Fowler of the Suisun fire protection district, who is fighting the fire. No containment figures are available, but Fowler said the firefighters are getting control and the noxious smoke from burning buns and marsh vegetation appears to have been Tuesday.

09:01 AM: Do something, VA chief tells Newsom: PG & E's blackouts could create "significant life-threatening problems" for veterans with medical problems, said the US Department of Veterans Affairs urging statesman Gavin Newsom to resolve the situation. VA Secretary Robert Wilkie urged Newsom in a letter Monday to "use your authority as governor to restore security to the millions of people you serve, including veterans who rely on power for their health and safety."

10/29 PSPS Update # 1 – Off-energization in Alameda County begins at 23. The scale of power outages is expected to be smaller in scale, and we are waiting for new maps to be released. Restoration will begin Wednesday morning.

"Something MUST be done before someone dies because of [the shut-offs]," Angelo said.

07:47 NWS releases more detailed information on high wind: The red flag warning, which means dry, windy conditions that can quickly turn sparks into wilderness ires, starts at 20 on Tuesday in the North Bay and at. in the East Bay. The warnings expire at. Wednesday. The strongest winds are expected to arrive overnight Tuesday through dawn Wednesday with gusts of up to 65 mph on North Buka's highest peaks and up to 50 mph in the East Bay hills. Winds can also pick up in the East Bay valleys, near Livermore and Concord, with gusts of up to 35 mph. "This wind event doesn't look as strong or last as long as it does this weekend," said Spencer Tangen, a meteorologist from the National Weather Service.

07:19 PG&E begins power shutdown: A PG&E spokeswoman for Ari Vanrenen confirmed the utility started preemptively cutting power to customers in Northern California around 5 a.m., and several Bay Area counties around 7 a.m. "We've been on track to start the process," she said. PG&E officials have not said how many people are facing the next round of blackout, which had never recovered power from last week's closures.

7:07 am The Fire Department's optimistic progress can be made in Sonoma County: Cal Fire officials plan to arrive Tuesday morning in favorable weather conditions before the winds pick up again in the evening. Narrow roads and steep terrain still make it difficult to access certain fire areas, authorities said.

6 : 52 am Smoke may increase before blowing into the ocean: Smoke from the Kincade fire will continue to drift into the Bay Area this morning, increasing haze and odor, before the winds changes direction around 12 o'clock and blows it out to sea, according to the National Weather Service. Smoke from the Grizzly fire near Suisun City could continue to enter the East Bay and possibly the rest of the Bay Area despite the winds.

In front of the windshield view of what our # Firefighters met with this morning (03:00). We appreciate their complete dedication to the task of protecting life and property. #KincadeFire @IAFFNewsDesk @ team10th #nosleep #sffd #sffire #firelife #wildland pic.twitter.com/Dlpf9P8Zd

06:27. Here are the number of power outages in the Bay Area expected Tuesday: PG&E officials released estimates from county residents and businesses expected to be affected by closures Tuesday. Utility officials have not released any estimates of how many of the approximately 596,000 affected customers who had never recovered power since last week's closure. Among those potentially affected Tuesday:

23:40 PG&E releases estimates for next power cut: PG&E released estimates for its next power cut for each affected county in the North and Central California. Utility officials said the estimates may change depending on changes in weather conditions. The closure is expected to affect about 596,000 customer accounts in the northern and southern Sierra, North Bay, Bay Area, Santa Cruz Mountains, North Coast and Kern counties, PG&E said.

Click here to see PG&E's map of areas that can get dark.

11: 05.00 Three schools in Oakland Unified School District are closed on Tuesday: All schools in Oakland Unified School District will be open as normal on Tuesday, with the exception of the following schools: Community Day 6-12 School, Carl Munck Elementary School, and Redwood Heights ES. School district officials initially announced that five schools would be closed, but two of the affected schools – Montera Middle School and Joaquin Miller Elementary School – had power restored late Monday.

9:15 p.m. Power returning to Novato: Power has been restored in parts of Novato (Marin County), according to the Novato Police Department. Officials said the next power outage could begin Tuesday morning. "Be prepared, be safe and take care of each other," police said.

08:57 AM Potter Valley Emergency Evacuation Alert in Mendocino County: The Mendocino County Sheriff's Office issued an "entire Potter Valley and outcrop" evacuation alert to the Lake County line due to fire at the Cold Creek Compost facility. Officials said the fire could potentially move into the Potter Valley (Mendocino County) depending on the wind conditions in the region. "Please prepare yourself and your family to travel quickly if the order is placed," officials from the sheriff's office said.

20:00 Power restored to UC Berkeley: PG&E restored power to UC Berkeley, according to the UC Berkeley Emergency Management Office. Staff at campus facilities "are converting from the cogeneration plant back to shared power with PG&E," officials said Monday night. Classes are expected to meet as scheduled on Tuesday.

7:22 p.m. Power 'Completely Restored' in San Ramon: Power was 'completely restored' to PG&E customers in San Ramon, according to Captain Denton Carlson, a spokesman for the San Ramon Police Department. "On top of that, it doesn't seem like we want to be part of tomorrow's Public Safety Power Shutoff!" Carlson said in a tweet.

7:13 p.m. Lakeport Unified School District closes on Tuesday: While power is expected to be restored in Lakeport (Lake County) Monday night, officials said power will be shut down again around 7 a.m. Tuesday as part of the next scheduled shutdown. School District will be closed on Tuesday, according to the Lakeport Police Department.