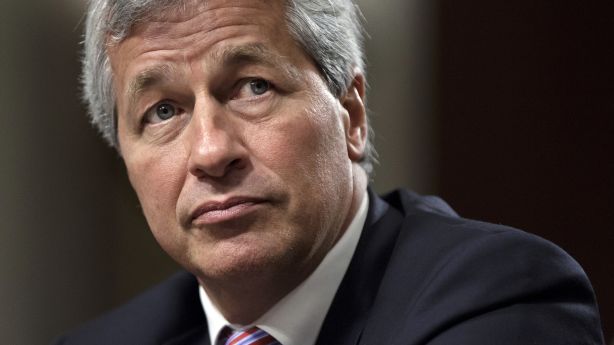 The initial applications of JPM Coin aren't revolutionary. JPMorgan said last week it would facilitate the instantaneous transfer of payments between institutional accounts. JPM Coin is just a prototype that can only be used by some of the bank's corporate customers.

But the news last week attracted a lot of buzz, because it could force other banks to follow with big blockchain or crypto related releases of their own.

The financial industry broadly agrees that money should move around the globe faster and more efficiently.

"Trillions of dollars slosh around the world via an antiquated system of slow payments and added fees," CB Insights analysts said in a recent report.

That's why banks in recent years have shown interest in digital coins and blockchain, a tamper-proof digital ledger. Blockchain is particularly appealing because it could allow banks to make payments faster and more securely, using technology that CB Insights said would dramatically c out processing times and reducing the need for third parties to get involved with transactions.

"There are only so many ways you can optimize payments," said John Velissarios, Accenture's blockchain technology lead. "The tokenization of cash is definitely one of them."

With the launch of JPM Coin, JPMorgan has shown it wants to get out in front of this transition, despite its previous skepticism.

That could push other banks to show they're in the game, too. Singh said banks have a large number of institutional clients, such as Citigroup, will feel the most pressure.

Citi has a sizable Treasury and Trade Solutions unit, which manages cash and payments for companies that operate in multiple countries

The bank actually tested out "Citi Coin" in 201[ads1]4 and 2015 at an innovation lab in Dublin, Ireland. The bank built the pilot so it would understand how money could eventually move on the blockchain, according to Manish Kohli, Citi's global head of payments and receivables.

It was never rolled out to clients, but Kohli said the experiment informs Citi's current approach to digital coins and blockchain.

The bank decided it made more sense to help build out of national payment infrastructures globally to support real-time payments, and to work directly with clients who want to incorporate blockchain into their payment flows, he said. That's what the bank has been doing with Nasdaq and Alliance, for example.

"You need every bank on the planet to be able to talk and communicate and be part of this system," rather than proprietary systems that benefit only " handful of banks "and aren't universally adopted, Kohli said. Citi declined to comment on JPM Coin in particular.

Other financial institutions are thinking about how to use this technology, too. Bank of America, for example, has 82 US patents or published patent applications to crypto, blockchain and related tech, according to Envision IP, a law firm specializing in intellectual property research. The hype around JPMorgan's rollout or JPM Coin is partially about timing. Enthusiasm around crypto is more muted than it was at the end of 2017 when bitcoin prices spiked.

"If this announcement was made a year and a half ago at the peak of the crypto craze, I'm not sure how big impact would have been, "Arieh Levi, an analyst at CB Insights.

The fact that JPMorgan, the nation's largest bank, is throwing its weight behind such a venture at this juncture lends, added. [19659002] JPMorgan will have a make up because of its size – and because it's a first mover. That could help it attract or retain clients.

"The more institutional clients you have, the more power you have [themorevaluableyoubecome"CarnegieMellon'sSinghsaid"Thatfightwillhappeninthenextfewyears"

It's not clear whether Citi will revive Citi Coin or Wells Fargo will launch Wells Coin in response to JPMorgan. Singh predicted that more banks would launch tokens of their own in the mix, and consolidation would happen down the line. "Eventually, one platform will win," he said.

It's not just major banks and financial services that need to tune into. JPM Coin also puts a spotlight on Ripple, a startup with its own crypto and payment network that uses blockchain technology.

, or the Swift network. That's what system banks use to securely communicate with each other to facilitate global payments. CEO Brad Garlinghouse dismissed JPM Coin on Twitter. But questions about whether or not a threat could keep cropping up.

Then there are the consortia that have allowed financial institutions to research blockchain applications together, such as R3, whose members include BNY Mellon, State Street and BNP Paribas.

Joining these platforms have served as a "low-cost way to explore the tech without investing too much money," CB Insights' Levi said. Yet banks may choose to reemphasize higher-profile approaches now that JPMorgan has asserted itself.

JPM Coin is still in its early stages, and its limits are a reminder that we are at the beginning of a sea change in how money is. transferred around the world.