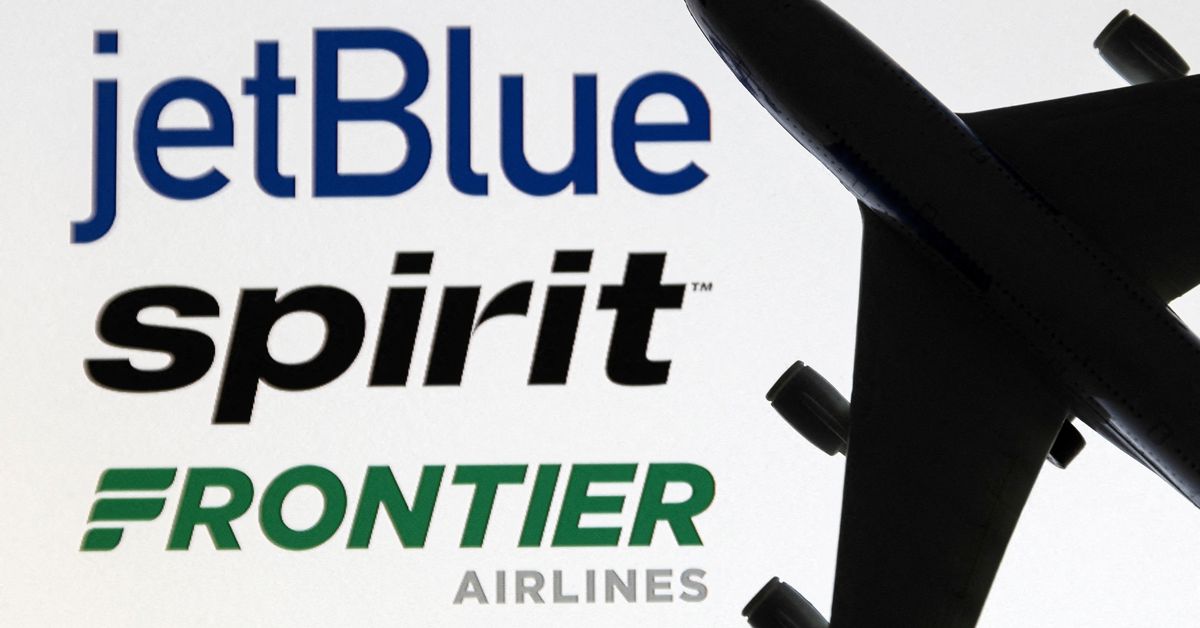 July 28 (Reuters) – JetBlue Airways Corp ( JBLU.O ) is nearing a deal to buy Spirit Airlines ( SAVE.N ) that could be announced as soon as Thursday, a source familiar with the matter said, after Spirit canceled its $2.7 billion sale to Frontier Group Holdings (ULCC.O).

The latest development marks a victory for JetBlue in its months-long battle for the ultra-low-cost carrier, although the potential combination is expected to start a battle with antitrust regulators, who have already sued to block JetBlue̵[ads1]7;s alliance with American Airlines ( AAL.O ).

A combination of JetBlue and Spirit would create the fifth-largest U.S. airline and be the most consequential U.S. airline industry merger since Alaska Air Group ( ALK.N ) bought Virgin America Inc for $2.6 billion in 2016.

JetBlue is offering terms similar to what it had previously proposed, the source said. In June, JetBlue had offered $33.50 a share for Spirit, or about $3.7 billion, and a breakup fee of $400 million.

It will also retain its Northeast Alliance (NEA) partnership with American, but is expected to announce fewer route sales to ease antitrust concerns, according to the source.

The Wall Street Journal first reported on the potential deal between JetBlue and Spirit.

Both JetBlue and Spirit did not respond to Reuters requests for comment outside regular business hours.

The source spoke on condition that they not be identified pending an official announcement of the deal.

Earlier on Wednesday, Spirit canceled the sale to Frontier after failing to convince shareholders of its merits.

That development, first reported by Reuters, came after Spirit pushed back a shareholder vote on the Frontier deal four times, hoping it could garner enough support. Spirit had previously argued that antitrust regulators were unlikely to approve JetBlue’s $3.7 billion bid.

The result was a setback for Frontier and its chairman Bill Franke, who was instrumental in starting talks between the sides last year. Franke’s airline-focused buyout firm, Indigo Partners, is a major shareholder in Frontier.

“While we are disappointed that Spirit Airlines shareholders failed to recognize the value and consumer potential inherent in our proposed combination, the Frontier board took a disciplined approach,” Franke said in a statement.

JetBlue sees Spirit as an opportunity to expand its domestic footprint at a time when the U.S. airline industry is suffering from labor and aircraft shortages.

“We are pleased that the merger agreement with Frontier has closed and we are engaged in ongoing discussions with Spirit toward an agreement as soon as possible,” JetBlue said in a statement.

But Spirit could also choose to remain independent.

The airline has expressed concern about JetBlue’s partnership with American. The US Justice Department filed an antitrust lawsuit against American and JetBlue in September to end the alliance, saying it would lead to higher fares at busy airports in the northeastern US.

JetBlue has refused to pull out of the alliance and instead offered sweeteners such as a higher breakup fee and route sales.

Frontier shares rose 6.4% to close at $11.27 on Wednesday as investors expressed relief that the company exited what had become a bidding war for Spirit. Spirit shares rose 4% to $24.30, while JetBlue shares rose 3.6% to $8.35.

With the end of the proposed Spirit-Frontier tie-up, Spirit will pay Frontier $25 million for merger-related costs it incurred. Under the terms of the deal, Spirit will owe Frontier an additional $69 million if it ends up entering into a merger agreement with JetBlue or another competitor within the next 12 months.

“Now that Spirit Airlines has terminated the Frontier merger agreement, we hope Frontier management will put aside its merger distraction and invest equal resources and focus on improving conditions at their own airline,” said the Frontier pilots’ union, which is a subgroup of the Air Line Pilots Association (ALPA).