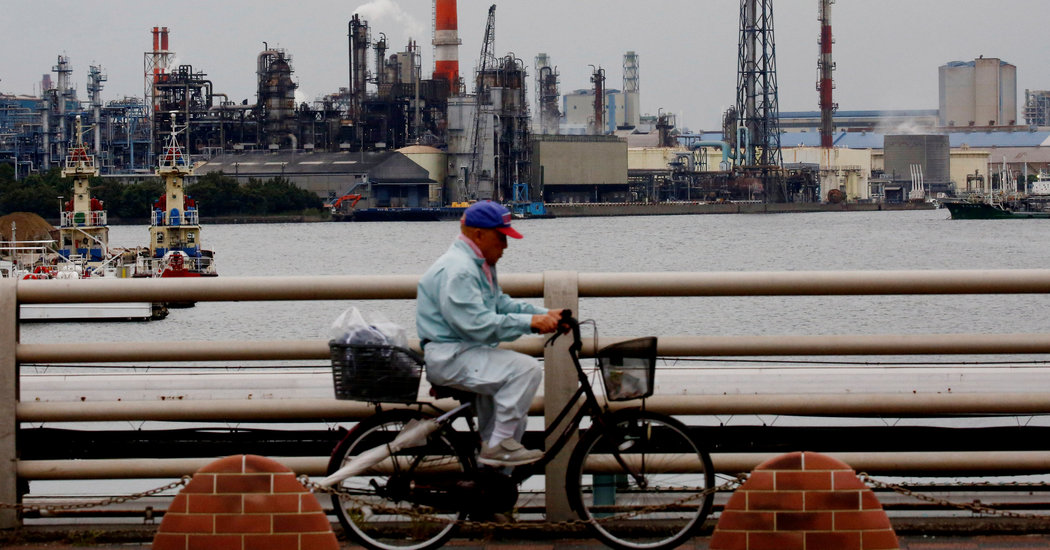 TOKYO – Japan's economy has come more than expected in the third quarter, caused by natural disasters and a decline in exports, a worrying sign that trade protectionism begins to charge overseas demand.

The 1.2 percent annual contraction in July to September was more than the average estimate of 1 percent growth in annual conditions. It followed robust 3 per cent annual growth in the previous quarter.

A decline in domestic demand was the main reason for the economy's decline, such as strong typhoons and powerful earthquake-stopped factories and consumption, although economists say this disturbance was temporary and the decline in exports is more worrying.

External demand – or exports minus imports – shaved one tenth percentage point of gross domestic product. This corresponds to the media estimate, but a breakdown of data showed that exports fell 1.8 percent quarter in the quarter, the fastest decline of more than three years.

Japan's economy is likely to continue its growth in the current quarter, but declining exports suggest that this recovery can be hampered by trade protection, which can increase the pressure on politicians to turn fiscal stimulus.

"Japan's economy is expected to recover mainly from domestic demand," said Toshimitsu Motegi, Japan's Minister of Economy, in a statement issued after the release of data.

"IT-related exports to Asia have gone slow in spring," he said, referring to information technology. "Therefore, we must be aware of the impact factors, and China's growth prospects could be in Japan's economy."

Private consumption, which accounts for about 60 percent of GDP, fell 0.1 percent in the period. It was less than the median estimate for a decline of 0.2 percent, followed by a 0.7 increase in the previous quarter.

Investments fell 0.2 percent, the first decline of two years. The median estimate was for capital expenditures to remain unchanged. It increased by 3.1 per cent in April-June.

In September, a large earthquake triggered a blackout on the northern island of Hokkaido, which followed severe typhoners that injured airports and transport infrastructures in western Japan.

Businesses were quick to resume normal operations, so the negative impact of these disasters will be short-lived, economists say.

A trade war between the United States and China, the world's two largest economies, is the biggest concern because it threatens Japan's exports of automotive, electronics and heavy machinery, economists say.

"The decline in exports can not be attributed to natural disasters," says Hiroaki Muto, economist at Tokai Tokyo Research Center.

"Without natural disasters, exports to China are slowing down. The message is that China's economy is weakening, which means that Japan's exports will be slow to recover and growth will stop around the first half of next year."

Prime Minister Shinzo Abe On Monday, government ministers ordered to collect a new public spending package in part in response to concerns about a decline in global demand.

Politicians are also worried that a nationwide sales tax increase planned in October next year gives another downside risk to the economy, making fiscal spending a more likely alternative to sustain growth.