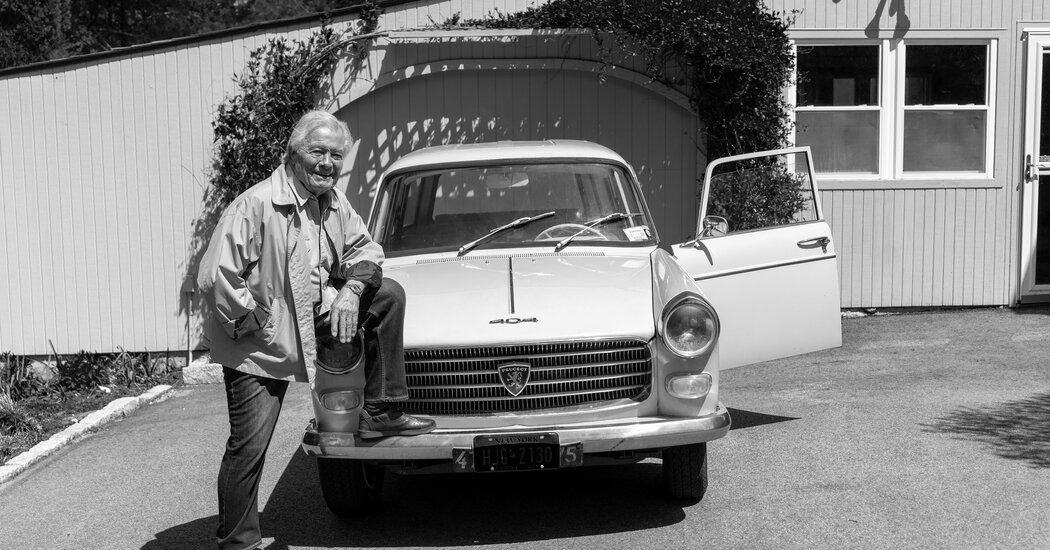 While the French are famously obsessed with the dilution of their culture at home, it’s not unfair to say that their great nation’s cultural influence seems to have waned in the wider world as well. To give two examples that touch me where I live, the primacy of French cuisine – once considered the best in the world – finish. No longer is the cozy French bistro a staple in every American city.

And although little is noted, one can also see the declining fortunes of the French automobile, a device whose invention is traced to Nicolas-Joseph Cugnot, who in 1[ads1]769 set out from the commune of Void-Vacon in northeastern France with the world’s first self-propelled vehicle , a steam-powered tricycle built like a carriage.

While still dominant in the domestic market, French cars claim only a small, if loyal, following in the United States. They have not been sold here since the early 1990s, despite their significant role in Stellantis, the name given to Fiat Chrysler Automobiles and French carmaker PSA following their merger last year.

To explore these twin cultural sea changes, I recently went with a friend to Madison, Connecticut, to visit and ruminate with one of America’s most famous French expatriates, Jacques Pépin. Arriving in the New World more than 60 years ago, Mr. Pépin, 86, has become one of French gastronomy’s most successful exponents in the United States: chef, cookbook author, television personality, painter, philanthropist and, more recently, star of social Media . As a former serial owner of French cars, he seemed uniquely suited to answer the question: Are these once internationally heralded products of French culture – food and cars – due for a 21st-century renaissance?

Our transportation to Connecticut was fittingly to be a 1965 Peugeot 404, a model Mr. Pépin once owned and fondly remembers. This, a seven-seat “Familiale” station wagon bought new by a Canadian diplomat on assignment in Paris, ended up for unknown reasons in a barn in Medicine Hat, Alberta, where it sat untouched for more than 50 years. Fully roadworthy, with less than 25,000 miles on the odometer, it oozes the charm of French cars at their distinctive best, with creamy, smooth mechanics, seats as comfortable as any divan and legendary Gallic ride comfort unlikely to better most modern cars. even on the roughest roads.

Our visit begins with a tour of Mr. Pépin’s home and outbuildings on his four wooded acres. Situated between a church and a synagogue, the facility houses two impressively equipped kitchens, with a dazzling array of neatly arranged cookware and pans. Two studios help extend Mr. Pépin’s brand indefinitely into the future, one with a kitchen used to film the series and videos, and another to paint the oils, acrylics and mixed media featured in his books and adorn his coveted, handwritten menus.

We leave in the 404 for lunch and we all arrive in nearby Branford at Le Petit Café, a French bistro. Chef Roy Ip, a native of Hong Kong and former student of Mr. Pépin at the French Culinary Institute in New York, greets our party, having opened especially this weekday afternoon for the mentor who 25 years ago helped broker the purchase of the 50-seat cafe . Over a groaning plate of amuse-bouche and freshly baked bread and butter – “If you have extraordinary bread, extraordinary butter, then it should be bread and butter” with every meal, the guest of honor gives a gift certificate and raises a glass of wine – we stand the delicate subject.

Although he drives a well-used Lexus SUV today, Mr. Pépin’s French driving license is clearly in order. Stories about his early life in France, where his family was deeply involved in the restaurant business, are peppered with memories of the automotive industry. A breakthrough concerns the Citroën Traction Avant, an influential sedan built from 1934 to 1957. The development of the car, which was revolutionary for its front-wheel drive and unitary construction, bankrupted the company’s founder, André Citroen, and led to its takeover by Michelin, the tire manufacturer.

The car’s mention brings to mind for Mr. Pépin a day during World War II when his family left Lyon in his uncle’s Traction Avant to live on a farm for a while. “My father was gone in the resistance,” he says. “I still remember that car as a child, especially the smell. I’ve always loved Citroëns because of that.”

Afterwards, his parents owned a Panhard, an idiosyncratic machine from a small but respected French manufacturer that would fall into the arms of Citroën in 1965, a decade before unwieldy Citroën itself would be swallowed up – and, critics claimed, homogenized – by Peugeot.

Like many French people after World War II and millions elsewhere, Mr. Pépin was smitten by Citroen’s postwar small car, the Deux Chevaux, which he says was the first car his mother had owned.

“Seven miles to the gallon, or whatever,” he says. “It didn’t go too fast, but we loved it.”

Mr. Pépin’s distaste for excess — despite his early forays into rich, labor-intensive cuisine, such as when he cooked at Le Pavillon in New York City, a one-time pinnacle of American haute cuisine — informed not only the simpler cooking he later championed, but many of his vehicle choices when he first hit the American highway. In his memoirs, for example, he refers to the Volkswagen Beetle that he used to slam down the Long Island Expressway on his way to visit one of his friends, New York Times food writer Craig Claiborne, on Long Island’s East End. A Peugeot 404 would figure in his commute to work at Howard Johnson’s test kitchen in Rego Park, Queens, where he worked for 10 years.

Later, a Renault 5 – an economical subcompact known as the LeCar in America – joined Mr. Pépin’s family as his wife Gloria’s daily driver.

He also remains a staunch supporter of what is perhaps France’s greatest automotive icon, the Citroën DS, which President Charles de Gaulle was driving when 12 right-wing terrorists attempted to assassinate him in 1962, firing 140 bullets into his car as it left central Paris to Orly Airport. The fusillade blew out the DS 19’s rear window and all the tires, but due to the unique hydropneumatic suspension, de Gaulle’s driver was able to drive the tireless car and its passengers to safety.

“It saved his life,” marvels Pépin. “A great car.”

Although Mr. Pépin had been a personal chef to de Gaulle in the 1950s, he did not know him well, he says. “The chef in the kitchen was never interviewed by a magazine or radio, and television barely existed,” he says. “If anyone came to the kitchen, it was to complain that something was wrong. The chef was really at the bottom of the social scale.”

That changed in the early 1960s with the arrival of nouvelle cuisine, Pépin believes. But not before he had turned down an invitation to cook for the Kennedy White House. (The Kennedys were regulars at Le Pavillon.) His friend René Verdon took the job, sending Mr. Pépin a photo of himself with President John F. Kennedy.

“Suddenly, now we’re brilliant. But,” he says with a laugh, “you can’t take it too seriously.”

Befriending a Hall of Fame list of American foodies, including Mr. Claiborne, Pierre Franey and Julia Child, Pépin eventually became a star without the White House association, although his extraordinary dealings were all but curtailed in the 1970s when he crashed a Ford station wagon while trying to avoid a deer on a back road in upstate New York.

If he hadn’t been driving such a big car, Mr. Pépin believes, “I would probably be dead.” He ended up with a broken back and 12 fractures and still has a “dragging foot”, he says, due to a severed sciatic nerve. His injuries forced him to close his Manhattan soup restaurant, La Potagerie, which served 150 gallons of soup a day and turned over its 102 seats every 18 minutes.

As Chef Ip presents the table with a simple but delicious Salade Niçoise, followed by a finely crafted apple tart, Mr. Pépin turns his attention to the question of France’s diminished influence in the culinary and automotive worlds. He is, I am surprised to learn, in agreement – ​​the ship has sailed.

“When I came to America, French food or ‘continental’ food was what some of the great restaurants were supposed to be, often with a misspelled French menu,” he says. But continuing waves of immigration and jet travel that opened up the far corners of the world led to that French food lost “its primary position”.

Mr. Pépin, who calls himself an optimist, hastens to add that he does not see this as a bad thing. He vividly remembers how culinary bleak America was when he arrived, attracted by a youthful enthusiasm for jazz. At first he marveled at the idea of ​​the supermarket.

“But when I walked in, no leeks, no shallots, no other herbs, a green salad that was iceberg,” he says. “Now look at America. Extraordinary wine, bread, cheese. A completely different world.”

In fact, Mr. Pépin, whose wife was Puerto Rican and Cuban, doesn’t even consider himself a “French chef” anymore. His more than 30 cookbooks, he says, “have included recipes for black bean soup with sliced ​​banana and cilantro on top.” He also has a recipe for southern fried chicken. “So in a way I consider myself a classic American chef,” he says. “Things are changing.”

During a quiet afternoon with Mr. Pépin, it becomes clear that while a changing world doesn’t bother him much, he has regrets, his biggest one being the loss of loved ones. His father died young in 1965, and his defining sadness, the loss of his wife, Gloria, in December 2020 to cancer weighs heavily.

“The hardest part is not sharing dinner at night. And that bottle of wine.” He remains silent for a long time.

In distilling his reflections on food and cars, the chef notes what he sees as a regrettable trend: the loss of variety, which can be attributed to corporate motives.

“There is more food in the supermarket today than there has ever been before,” says Pépin. “But at the same time there is more standardization. I try to shop where ordinary people shop, to get the best price. And I can’t go to the supermarket and find chicken backs and necks anymore.”

The same is true, he says, of the automotive industry, where the growing use of a small pool of multinational suppliers, along with tighter regulations and companies’ increased reluctance to take chances, has made cars increasingly similar across brands.

“The special qualities that made French cars different don’t really exist anymore, even in France,” he says. “They all follow the same aesthetic. Neither French food nor French cars have the cachet they used to have.”

As long as “people come together” and prepare quality ingredients, he has hope, because “eating together is probably what civilization means.”