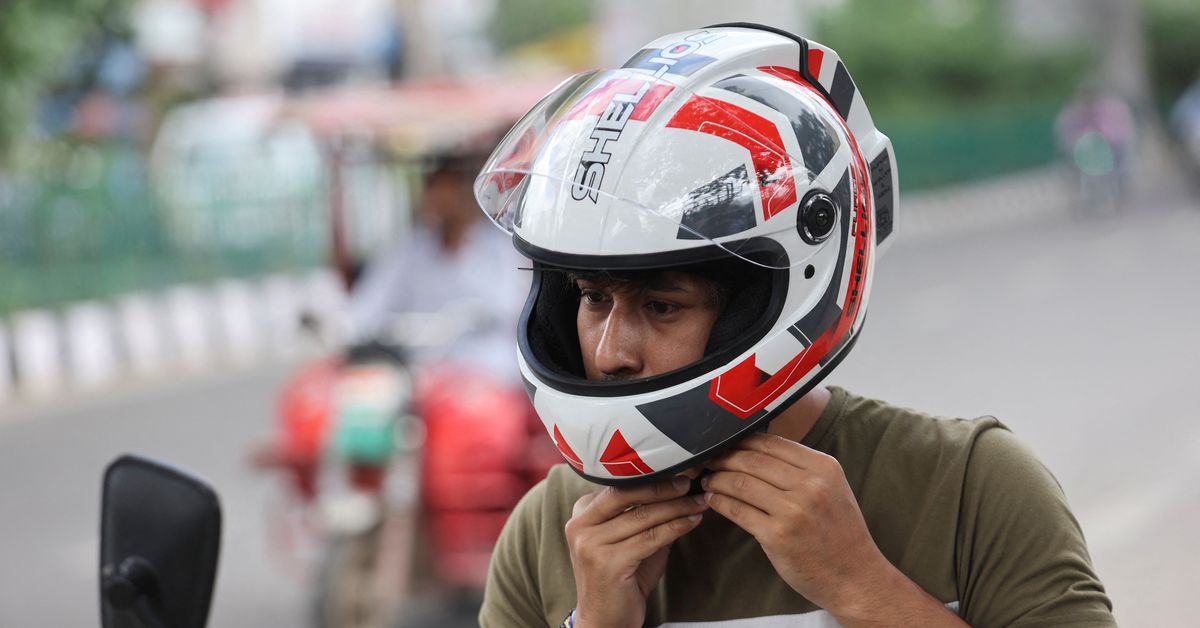 NEW DELHI, Aug 29 (Reuters) – As India’s capital New Delhi prepares for winter – and the accompanying season of acrid smog – the government is promoting a motorcycle helmet equipped with filters and a fan at the back that it says can remove 80% of pollutants.

Government agencies have pumped thousands of dollars into Shellios Technolabs, a startup whose founder Amit Pathak began work on the helmet, which he calls the world̵[ads1]7;s first of its kind, in a basement in 2016.

It was the year for the first headlines about the dirty air that makes New Delhi almost breathless from mid-December to February, as the heavy cold traps dust, vehicle emissions and smoke from burning waste dumps in neighboring states.

“Inside a home or office, you can have an air purifier,” said Pathak, an electrical engineer. “But the guys on the bike, they have no protection at all.”

So his company designed a helmet with an air cleaning unit, equipped with a replaceable filter membrane and a fan powered by a battery that lasts for six hours and can be charged through a microUSB slot.

Sales of the helmet began in 2019, and tests on the streets of New Delhi by an independent laboratory confirmed that it can keep more than 80% of pollutants out of users’ nostrils, Pathak added.

A 2019 test report seen by Reuters shows the helmet cut levels of lung-damaging PM 2.5 airborne particles at 8.1 micrograms per cubic meter from 43.1 micrograms outside.

An employee of Shellios Technolabs, which manufactures motorcycle helmets claimed to be equipped with filters and a fan on the back of the helmet, puts on the helmet, near their assembly plant in an industrial area, in New Delhi, India, on August 23, 2022. REUTERS/Anushree Fadnavis

India’s Ministry of Science and Technology says the helmet offers “a breath of fresh air for cyclists”. It may not come a moment too soon in a country that was home to 35 of the world’s 50 most polluted cities last year.

Pathak sees a big opportunity amid an annual demand for 30 million helmets, but declined to disclose his production or sales figures.

Each helmet costs 4,500 rupees ($56), or nearly four times the price of a regular helmet, effectively putting the device out of reach for many riders in India.

Since the 1.5 kg (3.3 lb) weight is heavier than existing units, Shellios has tied up with a major manufacturer to develop a lighter version from a thermoplastic material instead of fiberglass, a step that will also reduce costs.

The new version is expected to be released in a few months.

Pathak said the company had also drawn interest from Southeast Asian nations such as Malaysia, Thailand and Vietnam.