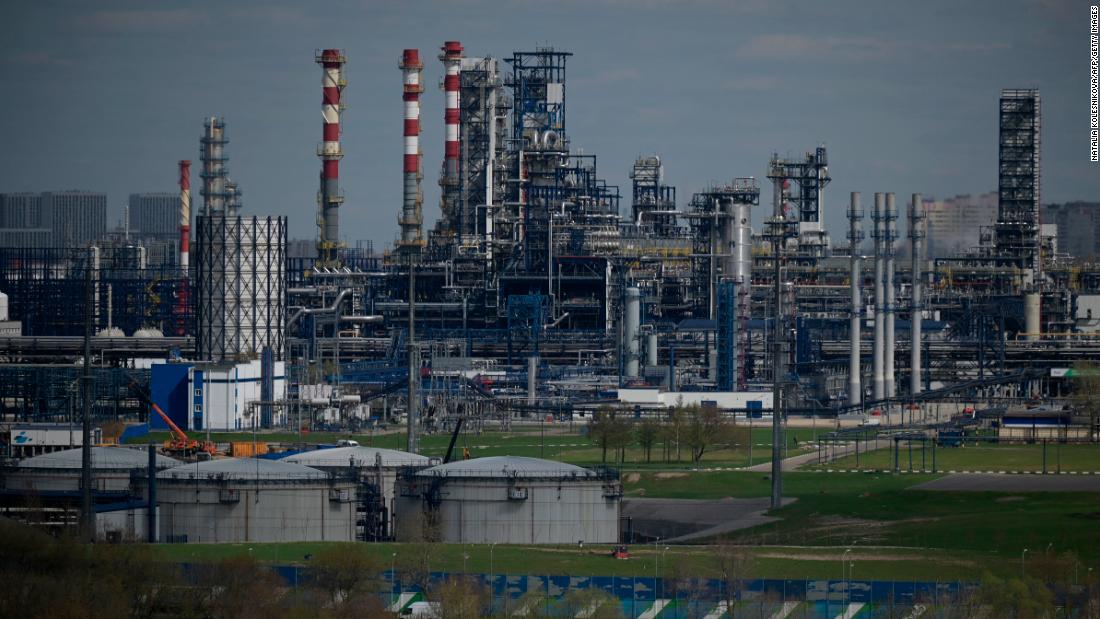 Russian crude oil flows to India are expected to reach 3.36 million tonnes in May, according to estimates from Refinitiv. This is almost 9 times higher than the monthly average in 2021 of 382,500 tonnes.

In total, the country has received 4.8 million metric tons of discounted Russian oil since the war in Ukraine began, Refinitiv added. Ural oil from Russia is currently trading at around $ 95 a barrel, while the global benchmark index Brent oil is above $ 119 a barrel.

Part of the reason for the price difference: The West has avoided Russian oil. On Monday, the EU agreed to ban 90% of Russian oil imports by the end of the year. Europe is the largest buyer of Russian energy.

The United States, Canada, the United Kingdom and Australia have already banned imports.

The embargo from a huge importer like Europe would put pressure on the Russian economy, but Moscow has found other buyers in Asia.

India, which imports 80% of its oil, usually buys only around 2% to 3% from Russia. But with oil prices soaring this year, the government has steadily increased its intake from Moscow, taking advantage of the big discounts.

According to Refinitiv, crude oil flows from Russia to India rose to 1.01 million tonnes in April from 430,000 tonnes in March.

India’s Ministry of Petroleum and Natural Gas did not immediately respond to a request for comment on the impact of the EU’s partial ban on the South Asian economy’s oil ties with Moscow.

Earlier in May, India toned down imports. In a statement, the Department of Petroleum and Natural Gas said the country imports oil from around the world, including a significant volume from the United States.

“Despite attempts to produce it in a different way, energy purchases from Russia remain minimal relative to India’s total consumption,” the ministry said in a statement. “India’s legitimate energy transactions cannot be politicized,” it added.

The world’s largest democracy has refrained from taking a tough stance against Moscow due to the war in Ukraine. Russia and India have a long history of friendly relations, dating back to Soviet times when the Soviet Union helped India win its 1971 war with Pakistan.
India is not the only Asian giant to buy Russian oil. China, historically the largest single buyer of Russian oil, is also expected to go shopping.
OilX, which uses industry and satellite data to track oil production and flows, found that China’s imports from Russia via pipeline and sea rose by 175,000 barrels per day in April – an increase of around 11% compared to the average volume in 2021. Seaborne imports will increase more sharply in May, according to early data.
Demand is expected to pick up as the world’s second largest economy begins to loosen its strict Covid-related restrictions in major cities.

The EU goes ahead with a partial ban

While Asia’s purchases of Russian crude oil are increasing, the EU on Monday decided to block most by the end of this year.

Russian crude oil accounted for 27% of the block’s imports in 2021, according to Eurostat.

Russian oil supplied by tankers will be banned, while exceptions will be made for the southern part of the Druzhba pipeline, said Ursula von der Leyen, president of the European Commission, at a press conference.

The northern part of the pipeline serves Poland and Germany – which have accepted the embargo. The southern part goes to Hungary, Slovakia and the Czech Republic and accounts for 10% of Russian oil imports.

After the embargo, Moscow may look for new customers more aggressively, but it will not be easy.

A significant part of Russia’s oil exports to Europe go to the block via pipelines. Redirecting these barrels to markets in Asia will require costly new infrastructure that will take years to build.

– CNN’s Julia Horowitz and Vedika Sud contributed to this report