"The journey to a balanced market will take time, and it is more likely to be a marathon than a sprint."

The International Energy Agency (IEA) said that the OPEC + cuts that started this month were likely to set a floor during the oil price, but that it would still take time before the reductions could balance the oil market.

Oil prices fell in December, even after the OPEC + cuts were announced. It reflected pessimism over the global economy's paths, as well as fears that the oil market was about to enter another abrupt decline, not unlike the 2014-2016 bust. These fears were exaggerated, at least as far as the oil market goes, but production cuts will still take time to work through.

OPEC published its Oil Market Report in recent days, which showed that the cartel knocked out 750,000 bpd in December ̵[ads1]1; sharp reductions that came before the agreement even came into force. Saudi Arabia led the way with reductions of 468,000 bpd, but the effort was backed by involuntary losses from Iran (-159,000 bpd), Libya (-172,000 bpd) and Venezuela (-33,000) bpd.

In fact, the three countries have made massive production reductions over the past two months. The OPEC + agreement uses October as its starting point, and requires 1.2 million barrels per day (mb / d) in reductions, and the group is well on its way thanks to the unrest in only a few countries. In November and December, Iran lost 561,000 bpd, Libya lost 190,000 bpd, and Venezuela's production fell 58,000 bpd. Overall, involuntary outbreaks exceed 800,000 bpd.

That makes Saudi Arabia's job much easier, and the de facto head of OPEC has promised to cut its own production by 800,000 bpd from the October baseline. This means that OPEC + is well on its way to balancing the oil market. 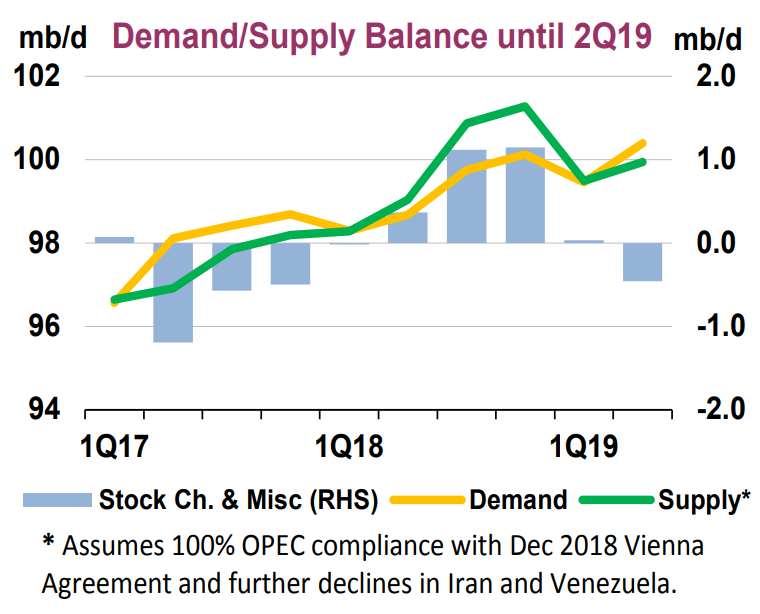 Nevertheless, there is less clarity about Russia's intentions, the IEA said in its report. The agency noted that Russia probably increased production in December to a new record of 11.5 mb / d, while the January slumps are likely to be phased in slowly. Saudi oil director Khalid al-Falih said in recent days that the cuts are "slower than I want."

Russia's energy minister Alexander Novak said on Thursday that his country would try to speed it up. "Of course we will try to make the cuts faster," Novak told reporters in Belgrade, Serbia. "We have our technological limitations, but we will aim to reach the levels we agreed upon."

Meanwhile, the US slate will continue to grow this year, which complicates OPEC +. The IEA left its US production growth projection unchanged at 1.3 mb / d. Related: This is how much each OPEC + member needs to cut

Demand remains one of the key issues for 2019. This is the first report from the IEA since the serious market crisis in December and the price increase. The agency left the demand growth forecast stable at 1.3 mb / d. While "global economy mood music is not very cheerful," the IEA said, lower prices and a weaker dollar have helped to boost demand. As a result, low prices contribute somewhat to the softer economy.

Finally, it's a big year for the downstream sector. Refining machines yield to the global marine fuel regulations of the International Maritime Organization (IMO), which comes into force on January 1, 2020. Turning out dirty oil from the global shipping fleet will lead to an increase in demand for middle distillates. The margins for diesel are already much higher than for gasoline, and the more refineries buying diesel, the more they flood the gasoline market. At the same time, large additions to the refining fleet are expected this year. "The treatment capacity will increase by 2.6 mb / d, the biggest growth for four decades," said the IEA. These changes can see major disturbances in various fuel markets, with a gasoline size along with a premium on diesel.

"At the end of the year, all industrial players upstream and downstream can feel like they have been running a marathon," IEA concluded.

By Nick Cunningham from Oilprice.com