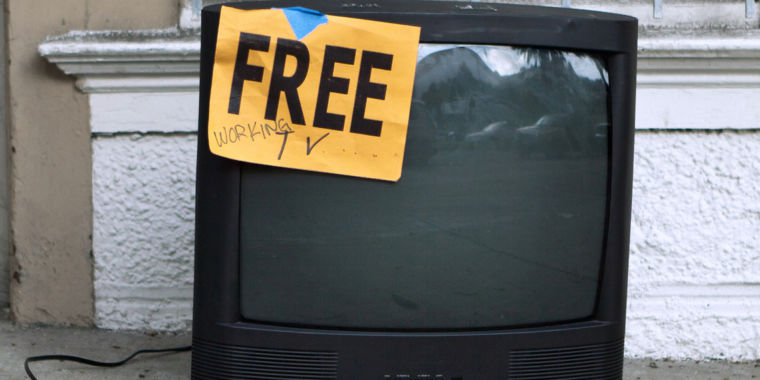 A non-profit organization that provides free online access to broadcast TV stations has accused TV networks of colliding to restrict access to these channels.

The nonprofit organization running Locast, the free TV service, made the allegations in response to a lawsuit filed by ABC, CBS, Fox and NBC. The networks claimed in July that Locast was infringing copyright and seeking a permanent injunction to shut down the TV service. The Locast operator filed its response to the TV network's complaint yesterday and tried to turn the tables by making several counter-claims against the TV networks.

"Plaintiffs have asserted to limit the reasonable public access to the high signals that they are required by law to make available free of charge," states the filing of the Locast courts. "[The networks] has instead chosen to use its copyrights incorrectly to construct and protect a pay-TV model that forces consumers to forgo airtime programming or to pay cable, satellite and network providers for access to programming that was intended to be free. "

While broadcast television networks are available over the air with an antenna, the networks reportedly collected $ 1[ads1]0.1 billion in 2018 via the forwarding fee they charge Television providers for the right to carry these channels. The networks will shut down Locast because free, widespread accessibility of their channels over the Internet would threaten their transmission business.

The television networks were filed in the US District Court for the New York District of the United States against Sports Fans Coalition New York (SFCNY), the nonprofit organization run by Locast, and SFCNY founder David Goodfriend.

Locast, available in 13 US markets so far, transmits local broadcast signals through an online streaming service and detects users' location so that each channel's stream is only available in the local broadcasting area. In its court filing, SFCNY argued that U.S. copyright law "unequivocally states that retransmission by nonprofit organizations does not constitute copyright infringement." In particular, the law states that secondary transfers are not copyright infringement if they are made by an "nonprofit organization, with no purpose for direct or indirect commercial benefit."

Locast does not charge users for its service, but requires donations to pay for its operation.

The TV networks have deliberately made it difficult to access their channels over the air despite the US government granting them "free licenses to parts of the limited public owned broadcast spectrum, "alleged SFCNY.

"The broadcasters have claimed to limit practical access to over-the-air signals by broadcasting signals that they know are of insufficient power to access all audiences within the relevant local geographies," SFCNY wrote. The networks thus do not meet their spectrum licensing requirement "to operate in the public interest," SFCNY wrote.

This error has resulted in poor quality air quality transmission in many markets, forcing consumers to pay for video services that include local or national television programming, including: (i) through cable or satellite providers; (ii) online through the cable or satellite providers' authenticated video services; (iii) over-the-top streaming services offered by broadcasters for a monthly fee (eg CBS All Access); or (iv) virtual pay-TV providers (e.g. YouTubeTV).

SFCNY claims that broadcasters "intentionally purchase advanced equipment, although other equipment is available for sale that may provide better coverage over the air," but does not appear to have direct evidence for this claim. The filing states that Goodfriend received this information "from a major market participant" who in turn had received the information "from transmitter equipment suppliers."

TV networks have also pushed TV providers to avoid collaboration with Locast, according to Locast's filing. For example, when Locast met senior executives on YouTube TV in April 2019, "the executives indicated that they had been told that if YouTube TV gives access to Locast, then YouTube TV will be penalized by Big 4 broadcasters in negotiating carriage agreements for others not "broadcast programming channels," said SFCNY's court filing.

Pay TV providers have complained about the high cost of transmitting broadcast TV channels and can benefit from an extension of the Locast service. Locast received a $ 500,000 donation from AT&T, but said the TV networks were pushing others to refrain from donating.

In addition to filing "a counterfeit claim for copyright infringement" against Locast, networks have "threatened business retaliation and baseless legal claims against any current or potential donors, backers or business partners to counterclaim plaintiffs," Locast argued. The cable company RCN "committed to donate $ 750,000 to SFCNY" but later decided not to do so because of "scare from the broadcasters," SFCNY claimed.

The television networks claim that Locast is not eligible for the nonprofit exemption under copyright law because it has "commercial purposes." The network's evidence of this is AT & T's $ 500,000 donation and the fact that Goodfriend is a paid lobbyist for Dish. SFCNY says it has not received any funds from Dish.

SFCNY accuses the TV networks of conspiracy to control trade and other violations of competition law and seeks financial damages and a injunction that would prevent the networks from continuing their right to copyright infringement. "Plaintiff's litigation is intended to scare the defendant into hiding the Locast service – and should that strategy not work, to bury the defendant under costly and unnecessary litigation," SFCNY wrote.