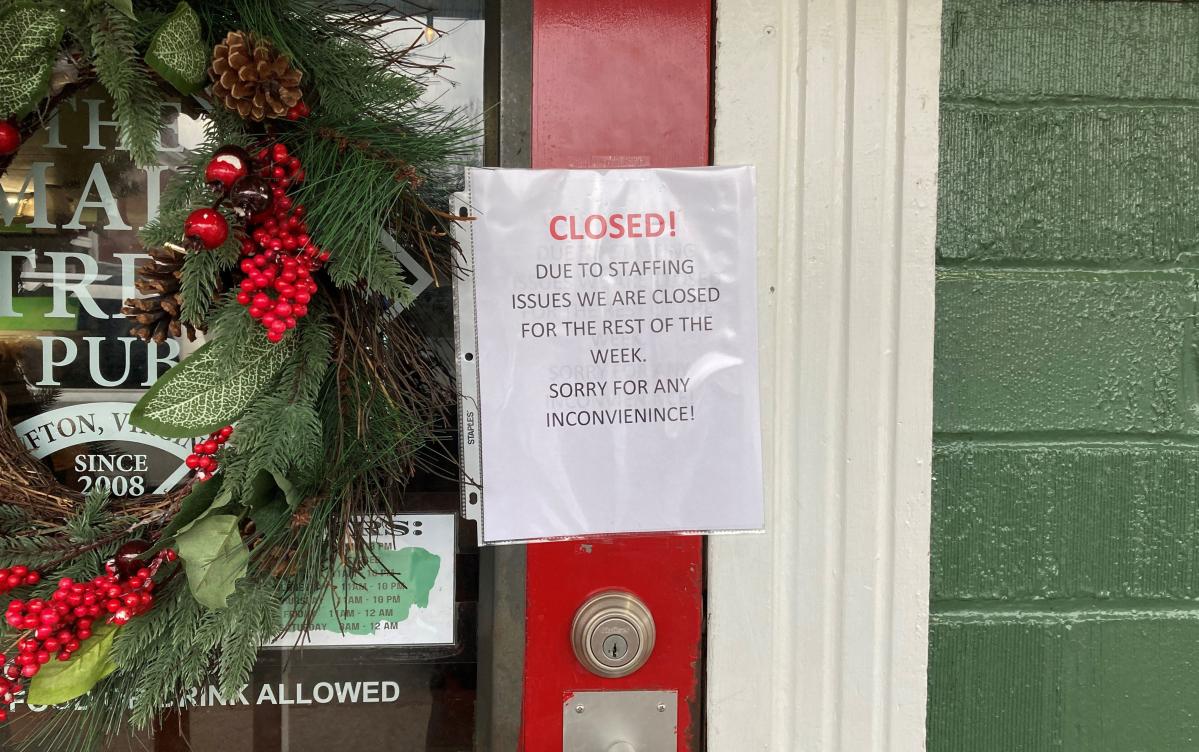 I went out for pizza the other night but had to eat it in my car.

That’s because Frank Pepe’s in Manchester, Connecticut had this sign on the door.

“Note: The dining room closed after 4pm today due to staffing shortages.”

So I ate in my SUV, no problem, (the pizza was amazing) but it got me thinking 1) this can’t be good for Frank Pepe, and 2) the note on the door is literally a sign of the times .

A sign that we live in a world where supply shortages – workers, oil, semiconductors – are common and are affecting the economy to a degree not seen in decades. The implications for inflation, Fed policy, a possible recession and our global welfare are immeasurable.

Supply constraints are everywhere these days, some Captain Obvious, others more opaque. In some cases, economic downturns are caused by falls in demand. It could be the result of a stock market crash like after 1[ads1]987 or 2000, as consumers have less money to spend. Or it could be an event like the covid recession from February to April 2020, when people didn’t venture out to buy things.

Supply shocks can also cause downturns or recessions. “In the 1970s there were two mega-shocks in supply,” economist Nouriel Roubini told me at the recent Yahoo Finance All Markets Summit. “One was the war between Israel and the Arab states that led to an increase in the price of oil in ’73, and the other was [1979 Iranian revolution] which also caused an increase in oil prices. This time the top is not only in an oil crisis, it is natural gas, food, fertiliser, industrial products and semiconductors.

Since the outbreak of COVID, the global economy has been hit by both supply and demand shocks, which have irked managers around the world. The roughly $5 trillion of stimulus that the government pumped into the economy increased demand for cars, housing, and meme stocks, etc. Given the aforementioned supply constraints, it’s hard to remember a time with such pronounced supply-demand mismatches.

One effect has been inflation, which currently stands at 8.2% – still hovering near the 40-year high of 9.1% we saw in June. Can we see how much of that comes from the demand side, how much from the supply side? Phil Levy, chief economist at Flexport, says that while Europe’s energy problems suggest a supply shock, excess demand is the biggest problem.

“The biggest part of what we see with [higher] the prices come from the demand, which has increased – and the supply cannot quite keep up with the pace, says Levy.

The causes of supply shortages

Let’s take a closer look at these supply shortages, the causes of which include the pandemic, the Great Resignation, Russia’s invasion of Ukraine, de-globalization and climate change – or a combination of these factors.

Putin’s invasion of Ukraine has disrupted the supply of wheat, corn and grain and even sunflower seeds. His stranglehold on Europe’s natural gas supply, plus sabotage of a pipeline there, plus boycott of Russian oil and gas means less energy for Europe and beyond. There is already a decline and halt in production. Winter is only 60 days away, and rationing for heat is a distinct possibility.

This is a global supply problem. How about this recent headline from the Wall Street Journal: “New England risks winter blackouts as gas supplies tighten on grid. Officials warn of strains as the region competes with European countries for shipments of liquefied natural gas.”

Speaking of New England, climate change could wreak havoc on the supply, as you may find out this Thanksgiving when your cranberry sauce is prohibitively expensive or even non-existent due to shortages. Why? Extreme drought in New England, which Zachary Zobel, a researcher at the Woodwell Climate Research Center in Massachusetts, told Grist was a result of climate change. Climate change disrupts the supply chain in many other ways, and on a much larger scale.

The chip shortage has also hit industries around the world — including the auto industry, as GM CEO Mary Barra recently told me. But it is not only the large companies that are affected by a low supply of chips. My alma mater, Bowdoin College, recently encountered supply chain issues while trying to complete some buildings.

“Due to chip shortages, the companies that manufacture the controls for our AV systems have announced 12-24 month delivery delays, and we are being warned that network equipment will be similarly challenged,” Michael Cato, Chief Information Officer. “This complicates our planning in several ways, including timing financial budgets and navigating the multi-year timeline for construction projects.”

There may also be a shortage of workers to complete these projects. The large redundancies have affected many companies, but it also affects the government. John McQuillan, chief executive of Triumvirate Environmental, which disposes of commercial and hazardous waste, has a business that requires government permits – a process he says has slowed down.

“We want to increase our processing capacity, but you have a bunch of regulators who have resigned. The more experienced tend to be older. I have four or five things on hold in the US, Canada and Mexico right now. And in all the cases I hear is, “We’re understaffed, the key person has resigned, or we’re waiting to hire someone for that position.”

What do we have in our anti-inflation toolbox?

What can be done about supply problems? Remember that they are a significant cause of inflation and possibly a recession. Ideally, the Federal Reserve can moderate inflation by raising interest rates. Unfortunately, the Fed’s traditional tools of raising interest rates and shrinking the balance sheet are about dampening demand, not increasing supply. That does not mean that politicians and the private sector are helpless.

Michael Spence, Nobel laureate in economics and professor emeritus at Stanford, writes in Project Syndicate that higher interest rates and the withdrawal of liquidity “threaten to push global growth below its potential”. “There’s another way,” he says, “supply-side measures.” Like what? Spence argues that “creeping protectionism must be reversed,” and calls for the removal of tariffs. He also says that work must be done to improve productivity. “Many sectors – including the public sector – are lagging behind, and concerns about the impact of automation on employment remain.”

In a recent report from the Center for American Progress, a liberal think tank in Washington, chief economist Marc Jarsulic argues for expanding the uptake of covid-19 vaccines to reduce labor and production shocks, and providing extra support for child and home care to increase labor force participation and to reduce the limits for immigration of working age in order to increase the labor supply.

“Actions like these are not part of the standard anti-inflation toolkit, but given the changing economic environment, they should be,” says Jarsulic.

Indeed, all these supply issues may produce a silver lining, argues Financial Times columnist Rana Foroohar in his new book “Homecoming, The Path to Prosperity in a Post-Global World,” noting: “The supply chain disruptions of recent years have now outlasted the oil embargoes of 1973–74 and 1979 combined. This is not a blip, but rather the new normal.”

The book argues that “a new age of economic localization will reunite place and wealth. The location-based economy and a wave of technological innovations now make it possible to keep operations, investments and wealth closer to home, wherever that may be.”

We hope that Foroohar has written the playbook.