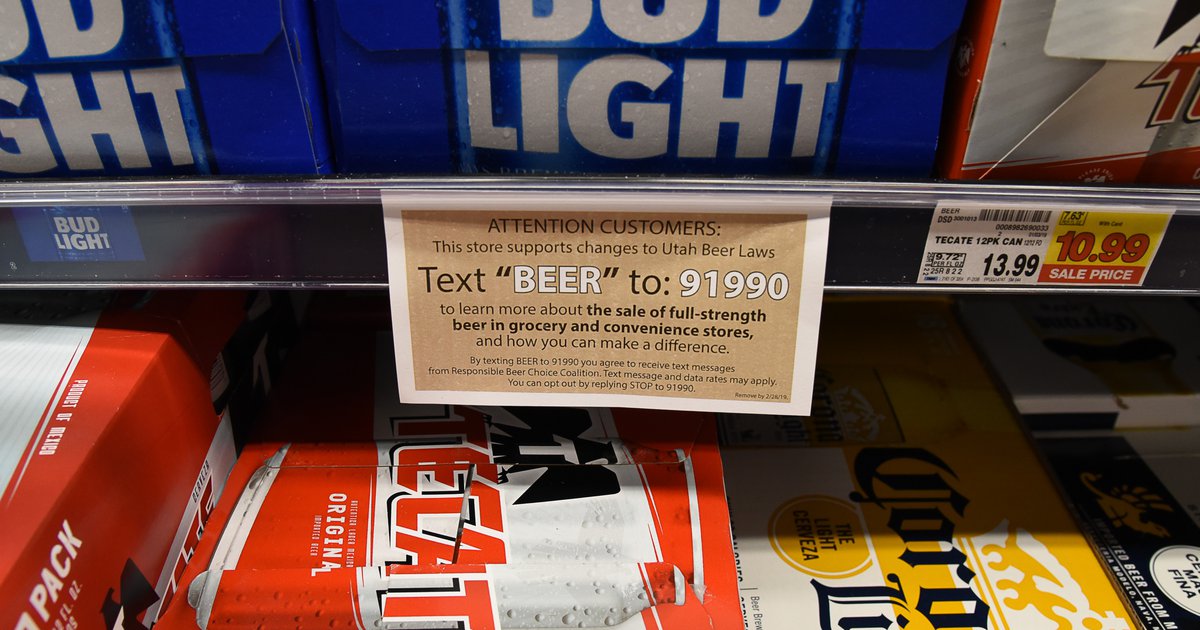 A century-old law that howls the alcohol content of beer sold in Utah grocery stores and convenience stores – and often makes the state the target of jokes – can tip in 2019 if Utah adopts a bill coming for the legislator. [19659002] Sponsored by Sen. Jerry Stevenson, R-Layton, the measure proposes to increase the alcohol law of the grocery beer from its current 3.2 percent weight of weight alcohol to 4.8 percent. (Or from 4 percent alcohol in volume to 6 percent ABV, a more common industry measurement.)

According to current Utah law, only 3.2 percent beer can be sold in stores. Beer with higher alcohol levels must be sold in state liquor stores.

Stevenson said the bill would still leave Utah near the bottom of states when it came to the alcohol content of the store beer. But it would also be in line with the majority of commercially produced brewers.

"It's more of the norm," he said Friday. "It will probably fill 90 percent of the gap."

He noted that Utah has already seen some products disappear from shelves, as the companies deviate from their low content variants, but he was unsure how his bill would be received by colleagues in the House and Senate.

"I've lived all the way from being the hero to having my head handed over to me," Stevenson said. "This is probably one of the two."

New laws in other states are forcing the proposed change. In 2018, Oklahoma and Colorado allowed higher alcohol beer to be sold in grocery stores. Kansas is not far behind; It will allow full strength beers in the stores beginning April 1st.

When that happens, only Utah and Minnesota will demand weaker beers in grocery stores; And officials estimate that low-alcohol beer will fall to only 0.06 percent of all beer brewed in the United States. Big companies, like Anheuser-Busch and MillerCoors, have said it's not worth brewing lighter beers for a small market.

The results have already been felt in Utah, says Kate Bradshaw, lobbyist and director of responsible beer selection. More than a dozen major brands have drawn their six-pack state configurations. Consumers can still get 3.2 beers in larger 12 and 20 packages.

Of the 604 registered Utah voters surveyed, 49 percent want the state to allow higher alcohol beer in stores, 45 percent against such a move and 6 percent are uncertain. The overall overall survey, carried out on 15-24. January, has a margin of error of plus or minus 4 percentage points, making the results a statistical death value.

Convincing legislators – the overwhelming majority are members of The Church of Jesus Christ of Latter-day Saints – Adjusting the Beer Law can prove difficult. Latter-day Saints are taught to refrain from alcohol as part of the health code of faith.

More than two-thirds (69 percent) of respondents who identified themselves as "very active" Latter-day Saints oppose changing the 3.2 standard. But nearly six out of 10 (58 percent) "somewhat active" members would support such a shift that would 74 percent of "inactive" members.

Meanwhile, 62 percent of Republicans do not want to change the law, which can pose a significant barrier to Utah's GOP-dominated Capitol Hill. Most Democrats (79 percent) and non-affiliated voters (57 percent) favor increased sales of alcohol beer in stores.