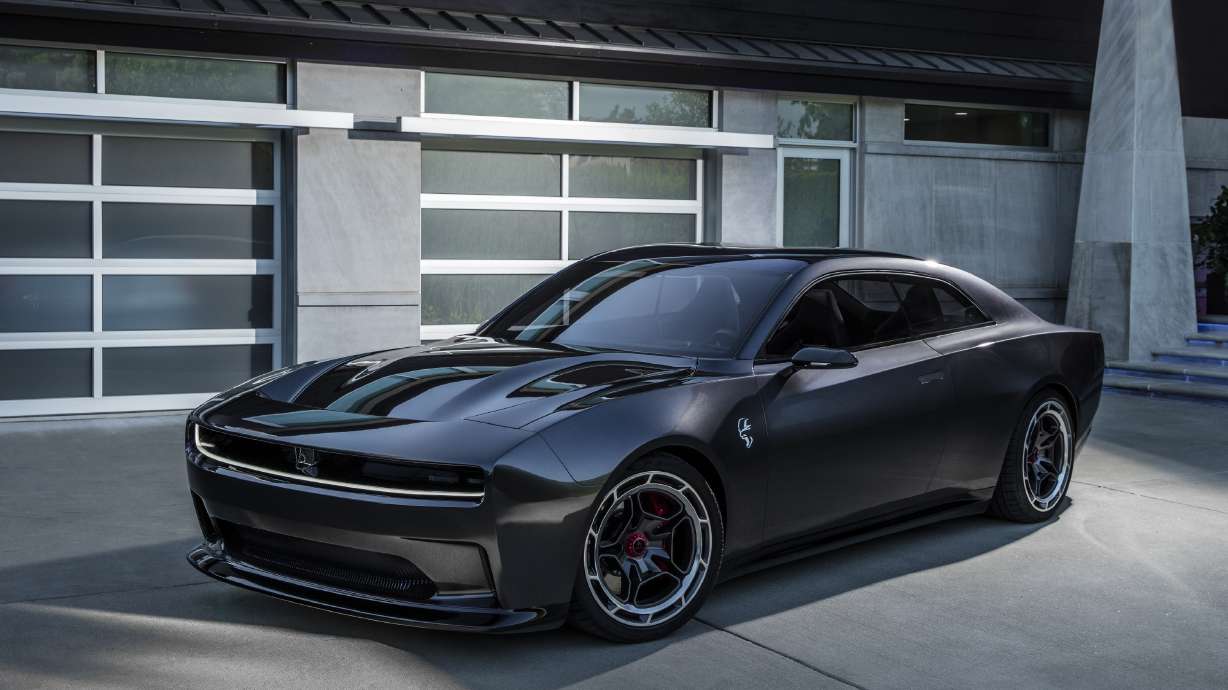 The Dodge Charger Daytona SRT concept is shown. Gas-powered muscle cars will be nearing their last Saturday night cruises in the coming years as automakers begin replacing them with superfast cars that run on batteries. (Stellantis via Associated Press)

PONTIAC, Mich. – Thundering gas-powered muscle cars, for decades a staple of American culture, will be nearing their last Saturday night cruises in the coming years as automakers begin replacing them with battery-powered superfast cars.

Stellantis̵[ads1]7; Dodge brand, long the performance flagship of the company formerly known as Fiat Chrysler, is officially moving electric. On Wednesday night, Dodge unveiled a battery-powered Charger Daytona SRT concept car, which is close to one that will be produced in 2024 when the sun sets on some petroleum models.

Stellantis says it will stop making gasoline versions of the Dodge Challenger and Charger muscle cars and the Chrysler 300 big car by the end of next year. The Canadian factory that makes them will be converted to electric vehicles. Other car manufacturers are moving – or have moved – in the same direction.

General Motors has said it will build an all-electric Chevrolet Corvette. Tesla says the Model S Plaid version is the fastest production vehicle ever made, capable of going from zero to 60 mph in under 2 seconds. Audi, Mercedes, Porsche and other European car manufacturers already have high-performance electric models on sale. And Polestar, an electric performance spinoff from Volvo, just announced a new Polestar 6 roadster for 2026.

One reason for the change in industry is that electric vehicles are simply faster from the starting line. Their handling is usually better too, because their heavy batteries create a low center of gravity.

Stricter state pollution requirements are also another factor. As U.S. automakers face tougher fuel economy requirements enacted by the Biden administration and produce a wider variety of electric vehicles, they will have to shed some of their gasoline-powered muscle car models.

Tim Kuniskis, CEO of the Dodge brand, said the possibility of government fines for not meeting gas mileage requirements hastened the transition to the electric charger. “Compliance fines and things like that associated with a big cast-iron supercharged V8, yeah, it’s tough,” he said.

I think we’ll continue to have some combustion stuff, probably through most of the decade. But increasingly the focus will be on the electric ones.

Nevertheless, it will take a few years before the gas-powered classics disappear.

“Over the next few years, I think we will continue to have some burn cases, probably through most of the decade,” said Sam Abuelsamid, a research analyst at Guidehouse Insights. “But increasingly the focus is going to be on the electric ones.”

Under new gas mileage standards unveiled in April, the fleet of new vehicles will average about 40 miles per gallon in 2026, up from 25.4 mpg now, the EPA says. The standards are likely to become even stronger in the future, a trend that will force American automakers to shed some gasoline muscle cars if they are to avoid fines.

Of all major automakers, the EPA says, Stellantis had the lowest average fuel economy — 21.3 miles per gallon — and the highest average carbon dioxide emissions. So the company will likely have to eliminate some models to avoid fines. For example, its limited-edition Charger SRT Widebody, with a supercharged 6.2-liter Hemi Hellcat V-8, gets just 12 mpg in the city and 21 mpg on the highway.

For many gearheads, the thought of a muscle car without noise and smell is heresy. But Kuniskis says Dodge is working hard to make the electric experience match internal combustion. The charger, he said, will generate its own airflow to create an exhaust noise that rivals gas cars. And the gearbox will change gears.

When the Electric Charger was driven through a garage door and into a building Wednesday night at a race track in Pontiac, Michigan, it roared just like a muscle car on gas.

Kuniskis would not say how quickly the electric charger will go from zero to 60 mph, but said it would be faster than the company’s current petroleum vehicles. He also wouldn’t say the range per charge for the new Challenger, but added that range isn’t as important as making it a true muscle car.

Rick Nelson, the owner of Musclecar Restoration & Design in Pleasant Plains, Ill., near Springfield, warned that switching from powerful fuel-burning engines to quiet electrics could be a hard sell to old-timers who grew up with the sounds and smells of racing. .

Nelson, 61, said he restored his first car while a teenager and spent hours at drag strips. He acknowledged that the transition to electricity is inevitable and necessary to attract a new generation that has become accustomed to low speed. Still, he said, electric muscle cars won’t have manual shifters, and he’ll miss the smell of racing fuel on the track.

Already, Nelson said, companies are emerging to put electric powertrains in classic muscle cars. He has been in contact with an engineer at Tesla about retrofitting batteries and electric motors for some classics.

“Guys like me are just going to wrinkle their noses and laugh at it,” Nelson said of electric muscle cars. “But this is not about my generation.”

Kuniskis says the transition to electricity doesn’t mean the end of the muscle car. It’s just a new era.

“It’s okay,” he said. “Let us show you what the future looks like.”