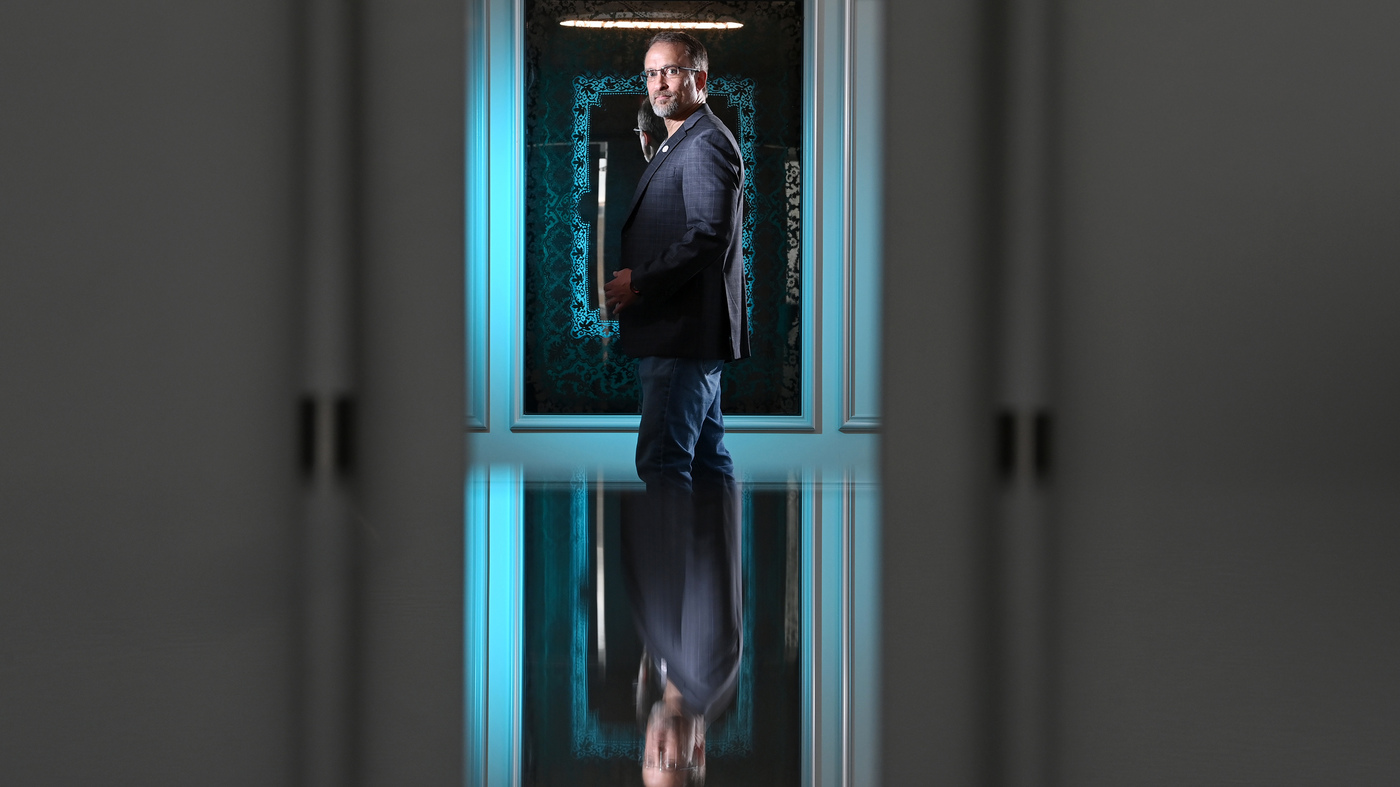 WASHINGTON, DC – AUGUST 22: Peiter Zatko, who is also known as Mudge, poses for a portrait on Monday, August 22, 2022 in Washington, DC. He has worked for Google and Twitter. (Photo by Matt McClain/The Washington Post via Getty Images)

WASHINGTON, DC – AUGUST 22: Peiter Zatko, who is also known as Mudge, poses for a portrait on Monday, August 22, 2022 in Washington, DC. He has worked for Google and Twitter. (Photo by Matt McClain/The Washington Post via Getty Images)

When Twitter’s former security chief testifies before a Senate committee on Tuesday, he will be the second high-ranking tech worker in less than a year to warn federal lawmakers about the struggles inside a social media platform.

The timing highlights both the recent public scrutiny of social media companies and Twitter’s own delicate position.

Peiter Zatko’s federal whistleblower complaint landed in the middle of a legal drama in which Twitter is trying to force Tesla CEO Elon Musk to make amends for a $44 billion deal to buy the struggling company.

Zatko, who is also known by his hacker name, Mudge, accused Twitter of lax security practices, failing to protect users’ privacy, misleading regulators in violation of a 2011 settlement, and knowingly hiring foreign governments and giving them access to sensitive systems and data .

Twitter has pushed back on the claims, saying Zatko was fired for poor performance and “opportunistically seeks to cause harm.”

This push and pull is familiar to Frances Haugen, who publicly called out her former employer, Facebook, at a similar hearing about a year ago.

Zatko “helps shine a light on the fact that critical parts of the communications infrastructure — Twitter, Facebook, TikTok — are held together with duct tape and string,” she said. “He took a huge personal risk and definitely a huge career risk in coming forward with this information.”

The Senate Judiciary Committee has scheduled the hearing for Tuesday at 10:00 a.m. Three hours later, Twitter shareholders are scheduled to vote on whether to proceed with the merger agreement that Musk wants to dissolve. The company says it is still committed to closing the deal on the original terms.

Frances Haugen: People should be ‘shocked’ by weak security systems

Almost a year ago, Frances Haugen testified before Congress about Facebook. Looking back, she said it was a critical moment in her journey from tech lead to whistleblower to activist.

Haugen says the public assumes Silicon Valley companies have deep pockets to maintain security. But Zatko paints a different picture, arguing that if a data center went down, Twitter might not be able to turn back on.

“It is symptomatic of a level of underinvestment that the public should be shocked by. We take for granted that private companies operate critical parts of the communications infrastructure,” she said. “We need to have public accountability and transparency about how these systems work, because I guarantee you there are more skeletons in the closet than just what we see on Twitter.”

She says social media companies tend to prioritize growth. Stronger security or better protection of users’ data does not lead to a larger audience.

“Critical parts of public safety are cost centers,” she said. “If it’s not critical to the bottom line, companies will never adequately invest in it. And unfortunately, that means it comes at the expense of public safety.”

It is also expensive to invest in security infrastructure and employees. Twitter has struggled financially for years, but the platform is deeply rooted in public life.

It has an “outsized influence. That’s why [Zatko] went to work there,” said Margaret O’Mara, who studies the history of technology at the University of Washington. “The founders never imagined it would have the political and news-making significance it has now.”

Unlike Haugen a year ago, Zatko is somewhat familiar with Congress and the ways of Washington.

Back in 1998, when most people surfed the Internet with Netscape or Mosaic, Zatko told a congressional committee that hackers could be an asset to the feds. He famously boasted that he could break the Internet in 30 minutes.

Peiter Zatko, known by the hacker name “Mudge,” speaks about cybersecurity to the Senate Government Committee on May 19, 1998. He is scheduled to testify again about his whistleblower case against Twitter on Sept. 13, 2022. (Photo by Douglas Graham/Congressional Quarterly/Getty Images)

Peiter Zatko, known by the hacker name “Mudge,” speaks about cybersecurity to the Senate Government Committee on May 19, 1998. He is scheduled to testify again about his whistleblower case against Twitter on Sept. 13, 2022. (Photo by Douglas Graham/Congressional Quarterly/Getty Images)

Zatko’s career developed and matured along with the commercial Internet. He worked for DARPA, the Defense Department’s secretive deep research unit, and founded a consulting firm before being hired by Twitter in November 2020 to bolster security after young hackers commandeered dozens of high-profile accounts, including Elon Musk’s.

“Of the other senior people I’ve known who have gone to work at Twitter in security, a large fraction of them go because they really care about public safety,” Haugen said, adding that many other tech companies pay more. “You go there because you see that Twitter is a critical part of global communications infrastructure and you want to give back.”

But Zatko says that when he raised concerns about security on Twitter, top executives, including the new CEO, Parag Agrawal, ignored them.

Haugen says she never intended to come forward with her criticism of Facebook. She believed the amount of internal documents she had collected and leaked The Wall Street Journal would stand alone. But when she testified, “the public was able to put a face to my name,” Haugen said. “About [Zatko’s] revelations having an impact will depend on the public trusting him.”

In contrast to Haugen, Zatko has presented far fewer internal documents so far to support his claims. And given the timing — in the middle of a legal battle between Twitter and Musk — people may be more skeptical of his motives.

Tromble says the public and policymakers need to trust people like Zatko and Haugen to shine a light on social media companies, which she describes as “black boxes.”

“We’re particularly lacking in transparency about the overall impact they’re having on their users. So right now we’re in a place where we’re relying on these individual whistleblowers for a look into the black box. And that’s really problematic.”

What you should look for during the hearing and beyond

Nu Wexler, a communications consultant who previously worked for technology companies, including Twitter, and on Capitol Hill, expects senators to ask about the two Indian government agents allegedly employed by Twitter and how Twitter protects sensitive information about American citizens.

But he doubts lawmakers are really motivated to act.

“We’ve seen time and time again, no matter who raises the alarm, no matter what controversial conflict, our representatives are up in arms for a while, proposing a series of pieces of legislation, and yet not much has yet come of it,” he said. “Perhaps in this case we will see more, because there are foreign intelligence and security issues involved.”

Nevertheless, he is skeptical that there will be much substance in the hearing.

“The hearing will devolve into a political food fight about bias and censorship, as all other congressional hearings do,” Wexler said. Because of free speech issues, “Congress is limited in what they can actually do with online content. And so they kind of stop, which wouldn’t be a bad outcome for Twitter here.”

Zatko filed his complaint with the Securities and Exchange Commission, the Federal Trade Commission and the Department of Justice. The SEC is already questioning Twitter about how it counts fake or bot accounts on the platform.

“We’re seeing, even just in the last few months, really strong signals from the FTC that they’re ready, willing and able to step into the void to take a much firmer stance on social media companies.” she said.

The FTC has already fined Twitter $150 million for misusing users’ email addresses and phone numbers for marketing purposes in violation of the 2011 consent decree.

Tromble says senators and their staff are now more familiar with technology policy and industry challenges. She expects sophisticated and nuanced questions from senators.

“I think we can expect more intelligent, thoughtful questions than we’ve seen in some of the hearings that took place maybe three, four or five years ago when [Facebook CEO] Mark Zuckerberg and [then-Twitter CEO] Jack Dorsey could say just about anything and it was taken at face value,” said Tromble, whose research has been funded by Twitter in the past.

Meanwhile, the lawsuit filed by Twitter against the world’s richest person is speeding toward an October 17 trial date.

Musk seized on Zatko’s allegations to bolster his defense, which had previously focused on how Twitter counts fake accounts on its platform. (Many corporate law experts say that’s a weak argument.)