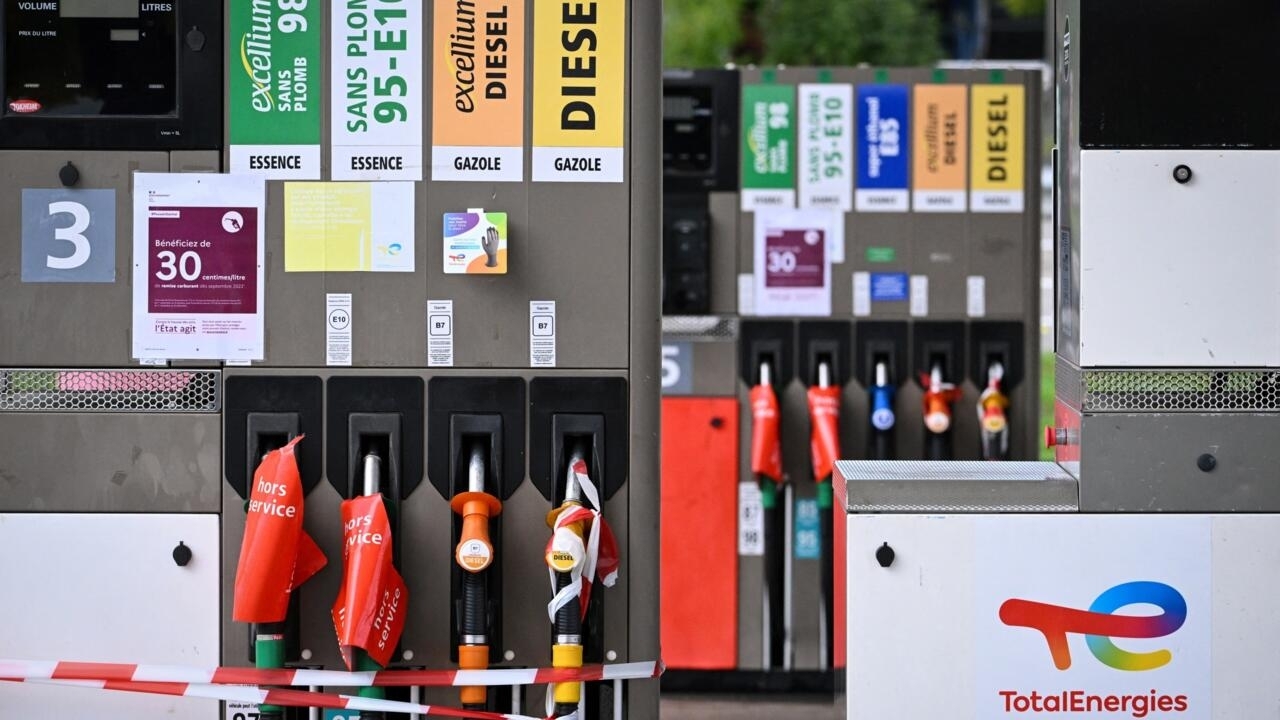 On Friday morning, a queue hundreds of meters long snaked its way from a gas station in the suburbs of Paris.

“We’ve been waiting for an hour,” said one motorist, whose car was already empty. “The queue has not moved at all. I don’t know what we’re going to do.”

Another driver joined the line of vehicles after trying two other stations, one of them directly across the street. “I got there at the same time as everyone else, then the signs said there was no more gas left,”[ads1]; she said.

Fuel shortages are hitting petrol stations across France, causing frustration and long waits for motorists, as a strike by workers at TotalEnergies and Esso-ExxonMobil enters its 12th day.

Three out of six refineries are currently closed in France due to labor strikes that have cut production by 60%, equivalent to 740,000 barrels of gasoline per day. The majority of TotalEnergie’s network of around 3,500 petrol stations – almost a third of all stations in the country – are running out of fuel.

Government figures estimate that only 19% of petrol stations are affected, with a particular shortage in the north. But the president of the Système U retail chain, Dominique Schelcher, told FranceInfo radio that the government figure underestimated the disruption.

“Just the vest [of France] will have fuel stocks,” he said, adding that “it was impossible to order” fuel in the north, east and south of France for this weekend.

As well as causing frustration for individual drivers, the shortage has thrown businesses – including delivery services, medical assistance, logistics chains and taxi companies – into chaos.

“What worries me is [what will happen to] disabled people, because we risk not being there for them if this continues,” said a taxi driver waiting at a petrol pump in Paris. “I only have half of my reserve tank left.”

“Nothing Can Come Out”

The French trade union CGT called for strike action against TotalEnergies over a week ago as part of wider action in the French energy sector.

Workers are demanding wage increases against a backdrop of a cost of living crisis and soaring profits in the energy industry.

The CGT has called for a tax on these profits and a 10%-7% pay rise to counter inflation and 3% “profit sharing”, demands that have been largely supported by energy workers.

At the TotalEnergies refinery in Feyzin near Lyon, production continued, but deliveries had stopped.

CGT representative Pedro Afonso told AFP that “100% of the dispatch workers were on strike for the 6am shift”, adding: “Normally there are 250 to 300 trucks every day and 30 to 50 railcars. Now nothing can come out.”

The strikes were originally intended to last three days, but almost two weeks later, TotalEnergies is still insisting that wage negotiations will start in mid-November, as planned, with an expected average wage increase of 3.5%.

TotalEnergies has played down the impact of its workers’ strike, instead arguing that supplies are under pressure due to the popularity of the company’s discounted fuel prices in recent months.

Demand at TotalEnergie’s gas stations has increased by an estimated 30 percent as customers have taken advantage of discounts offered by the company amid rising fuel costs.

As frustrations mount for striking energy workers and motorists, so do the stakes for the French government.

“Let’s not panic,” President Emmanuel Macron said on Friday, as he called for calm on all sides. But even as the president appealed for an end to the strikes, he agreed that leaders at Total should take into account the “legitimate wage demands” of their workers.

Their demands come amid a worsening cost-of-living crisis. At the same press conference, the president warned of difficult months ahead for gas prices, as food costs are expected to continue to rise.

Negotiations between the French government and unions, including the CGT, over pension reforms are also expected to create tension in the coming months.

Nevertheless, petrol in particular has a place of special importance in the French psyche. “Fuel prices are synonymous with yellow vests (Protesters in yellow vests),” said Paul Smith, associate professor of French politics at the University of Nottingham.

“The current situation is disturbing [the government] as a foretaste of trouble to come – a potential winter of discontent.”

The Yellow Vest protest movement, sparked in the winter of 2018 by rising petrol prices, saw thousands take to the streets for weeks on end in defiance of the authorities and President Macron.

Fuel tankers will exceptionally be allowed to operate on Sundays to make deliveries, and the government has dipped into its strategic fuel reserves to supplement available stocks.

At the moment, 90 days of fuel stocks remain, the minister for energy transition, Agnès Pannier-Runacher, has said.

In the meantime, efforts are also being made to open discussions between CGT and TotalEnergies – so far without success.

Further strike action is expected in the coming days.