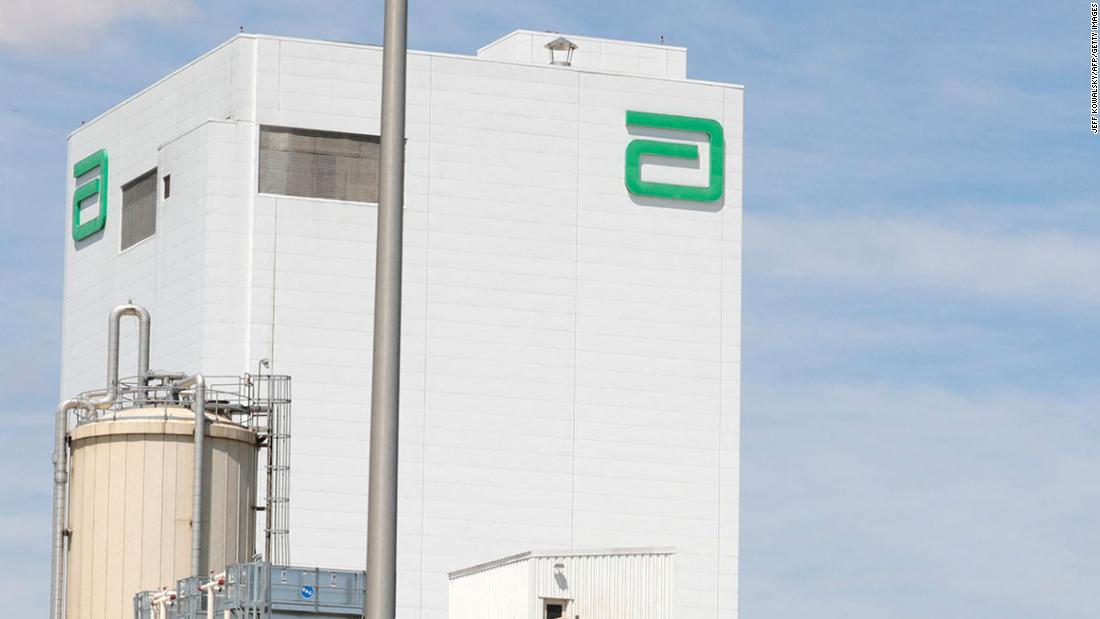 Production at the plant had resumed less than two weeks ago after a month-long shutdown that contributed to a nationwide formula shortage.
“Severe thunderstorms and heavy rain came through southwest Michigan Monday night, resulting in strong winds, hail, power outages and flood damage throughout the area,” Abbott said in a statement Wednesday night. “These violent storms produced significant rainfall in a short time – overwhelming the city’s surface water system in Sturgis, Mich., And resulted in flooding in parts of the city, including areas of our facility.

“As a result, Abbott has halted production of its EleCare specialty formula that was underway to assess damage caused by the storm and clean and refurbish the facility. We have informed the FDA and will conduct extensive testing in collaboration with the independent third party to ensure that the facility “It is safe to resume production. This is likely to delay the production and distribution of new products for a few weeks.”[ads1];

Abbott said that once the plant is rehabilitated and production resumes, it will restart EleCare production, followed by specialty and metabolic formulas, and will “work to restart Similac production at the plant as soon as possible. ”

IN tweeter On Wednesday night, U.S. Food and Drug Administration Commissioner Dr. Robert Califf said, “We know Abbott is working quickly to assess the damage and will report progress to us in the coming days. Once the company has established a plan, the FDA will be back in the plant works to ensure that they can quickly start producing safe and quality formula products again. “

The facility closed for months

The plant had been closed for several months after an FDA inspection found Cronobacter sakazakii bacteria, which can be lethal to infants, in several areas. Similac, Alimentum and EleCare powdered infant formulas manufactured at the plant were recalled, and the closure exacerbated the shortage caused by supply chain disruptions. Families across the United States have been struggling for months to find infant formula for infants and for people with specific nutritional needs.

Califf said last month that the closed facility in Michigan needed extensive repairs, including replacement of roofs and floors.

“You just can not open a plant with bacteria growing in it,” he said during a Senate hearing. “I mean, would you go into a kitchen next door if there were bacteria growing everywhere, and standing water and people trampling through with mud on their feet? That’s basically what the inspection showed.”

In May, a federal judge signed an agreement between the FDA and Abbott outlining the steps the company had to take to restart production. The facility reopened on June 4.

But on Monday, severe weather moved over the Upper Midwest and the Ohio River Valley, including Michigan.

Califf called the recent closure an “unfortunate setback and a reminder that natural weather events can also cause unforeseen disruptions in the supply chain.”

Abbott said Wednesday that they have “abundant existing supply of EleCare and most of its specialty and metabolic formulas” to meet the need until new products are available. Such products are released to families through health professionals.

There have also been measures to increase the availability of other types of formula. President Joe Biden invoked the Defense Production Act to tell formula ingredients suppliers to prioritize delivery to formula manufacturers, and the administration launched Operation Fly Formula to import formula from abroad.

Califf said on Twitter on Wednesday that teams are working “night and day” to make the formula available. He said Abbott has exceeded the monthly amount of formula produced in 2021 even while the plant in Michigan was closed, and other manufacturers are making formula to “higher than average.”

“This means that the total amount of formula available, even before the Sturgis plant is back in production, exceeds the demand for formula before the recall,” Califf wrote.

But many grocery store shelves remain bare. About a quarter of breast milk substitute products were still sold out in the United States last week, according to data from market research firm Information Resources Incorporated, or IRI.

IRI data are often cited by the White House as a measure of the severity of the deficiency. The latest data show that approx. 24% of the breast milk substitute products were sold out during the week ending 12 June, up from approx. 22% the week before.

Prior to a nationwide recall of Abbott’s infant formula in February, approximately 10% of infant formulas were typically sold out.