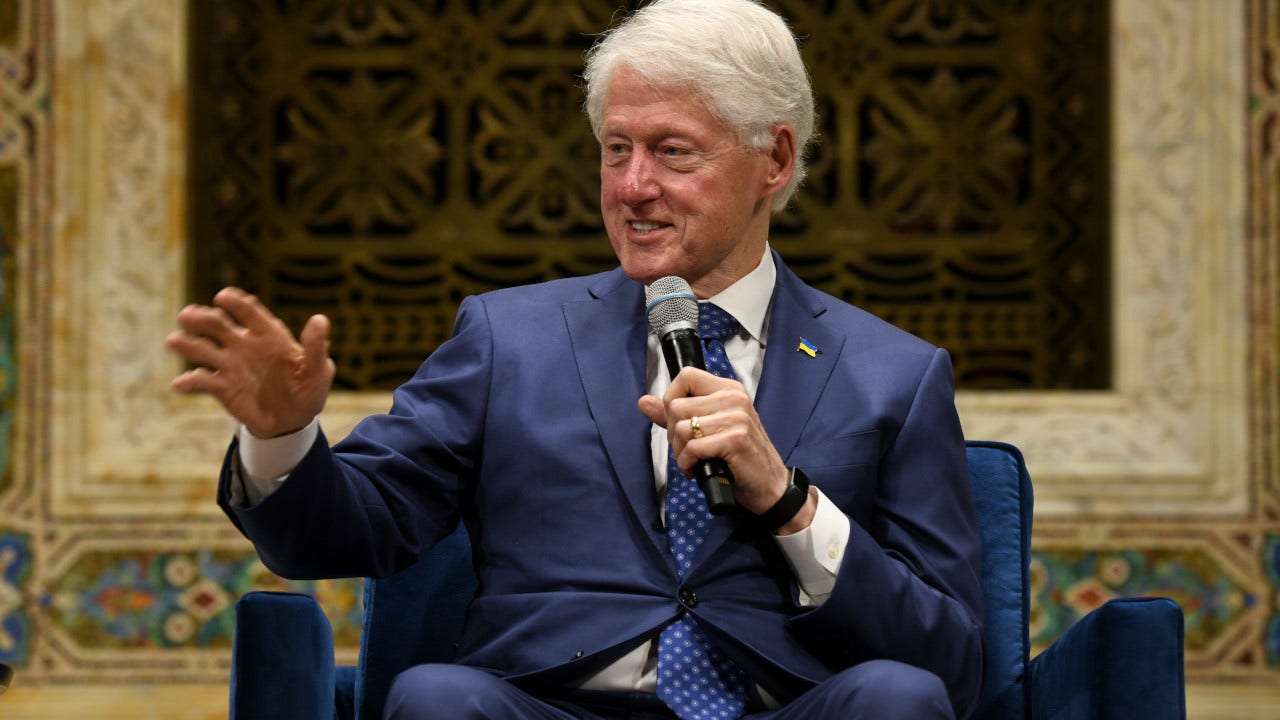 Entrepreneur and crypto investor Evan Luthra discusses the demise of cryptocurrency exchange platform FTX and the uncertain future of the crypto industry on ‘Cavuto: Coast to Coast.’

Months before FTX founder and crypto tycoon Sam Bankman-Fried lost his $15.6 billion fortune and his company, he was joking around with Bill Clinton at a smart cryptocurrency conference in the Bahamas.

Clinton was a paid speaker at the April 2022 Crypto Bahamas event hosted by the now-bankrupt crypto exchange FTX, where Democratic megadonor Bankman-Fried moderated a panel with former president and former British prime minister Tony Blair. Clinton̵[ads1]7;s comments were off the record, but a recording was leaked of him advocating a “do no harm” approach to cryptocurrency regulation, according to industry outlet Trust Nodes.

Clinton also said there was a “temptation to abuse” digital currencies, but he praised the new technology as “obviously serious” in his comments, Politico reported in April.

“You want to get it right in the regulatory space,” he reportedly said, referring to the administration’s efforts to deregulate financial markets in the 1990s.

Sam Bankman-Fried, founder and CEO of FTX Cryptocurrency Derivatives Exchange, during an interview on an episode of Bloomberg Wealth with David Rubenstein in New York on August 17, 2022. (Jeenah Moon/Bloomberg via Getty Images/Getty Images)

The April conference was an expensive, exclusive party for a who’s who of major crypto investors, celebrities and world leaders. Katy Perry and Orlando Bloom were pictured in attendance, as were NFL GOAT Tom Brady and then-wife Giselle Bundchen, while DJ Steve Aoki and former One Direction singer Liam Payne provided entertainment for conventioneers, who paid upwards of $3,000 for their tickets.

FTX hosted the event in partnership with the SALT Thought Leadership Forum, which was founded by Anthony Scaramucci, who briefly served as White House Communications Director for former President Donald Trump.

It was a celebration of the enormous potential for wealth that makes cryptocurrency so enticing. But now, seven months later, the inherent risk of the loosely regulated market is clear. The incredible collapse of FTX from the world’s third largest cryptocurrency exchange to bankruptcy within a week has left investors stunned, clients fleeing and lawmakers calling for new rules for the crypto industry.

“I stayed up, and should have done better,” Bankman-Fried tweeted Thursday, grossly understating how his mismanagement left FTX with an $8 billion hole in its budget.

After Bankman-Fried resigned in disgrace, his successor John Ray III — the lawyer who previously oversaw the $23 billion bankruptcy of energy company Enron — accused the former CEO of allowing “a complete breakdown of corporate control.”

“Never in my career have I seen such a complete failure of corporate controls and such a complete absence of reliable financial information as occurred here,” Ray said in a filing with the US Bankruptcy Court for the District of Delaware. “From compromised system integrity and faulty regulatory oversight overseas, to the concentration of control in the hands of a very small group of inexperienced, unsophisticated and potentially compromised individuals, this situation is unprecedented.”

FTX lawyers said Thursday that Bankman-Fried’s “unconventional management style,” “his incessant and disruptive tweeting” and “the almost complete lack of reliable corporate records” have complicated efforts to restructure the company. In court filings, they accused the embattled crypto mogul of trying to move assets out of the US and into the Bahamas, where they would be under the control of the Bahamian government, in an apparent attempt to circumvent US regulators.

Adding to the intrigue is the fact that Bankman-Fried, who has donated roughly $38 million to Democrats and left-leaning causes over the past two years, has lobbied for regulations that would be favorable to FTX.

“I’m optimistic that in the next year or so we’ll see some really significant steps forward in the global regulatory environment and the US regulatory environment for cryptocurrencies. You know, it’s been a pretty tough back-and-forth battle, I think, for a while. And I think [the] the industry is as much to blame for that as anybody in terms of the relationships that have developed between, you know, the industry and regulators,” Bankman-Fried told FOX Business Network ten months before his downfall.

GET FOX BUSINESS THE GO BY CLICKING HERE

“But I think there’s a light at the end of the tunnel there. And I think there are some simple policy proposals that can address what regulators want while allowing cryptocurrency to really grow a lot as an asset class that moves liquidity and volume. country,” he added.

US lawmakers have called the FTX crisis a “debacle,” and the House of Representatives will hold hearings in December to examine the collapse of FTX and “the broader implications for the digital asset ecosystem.”