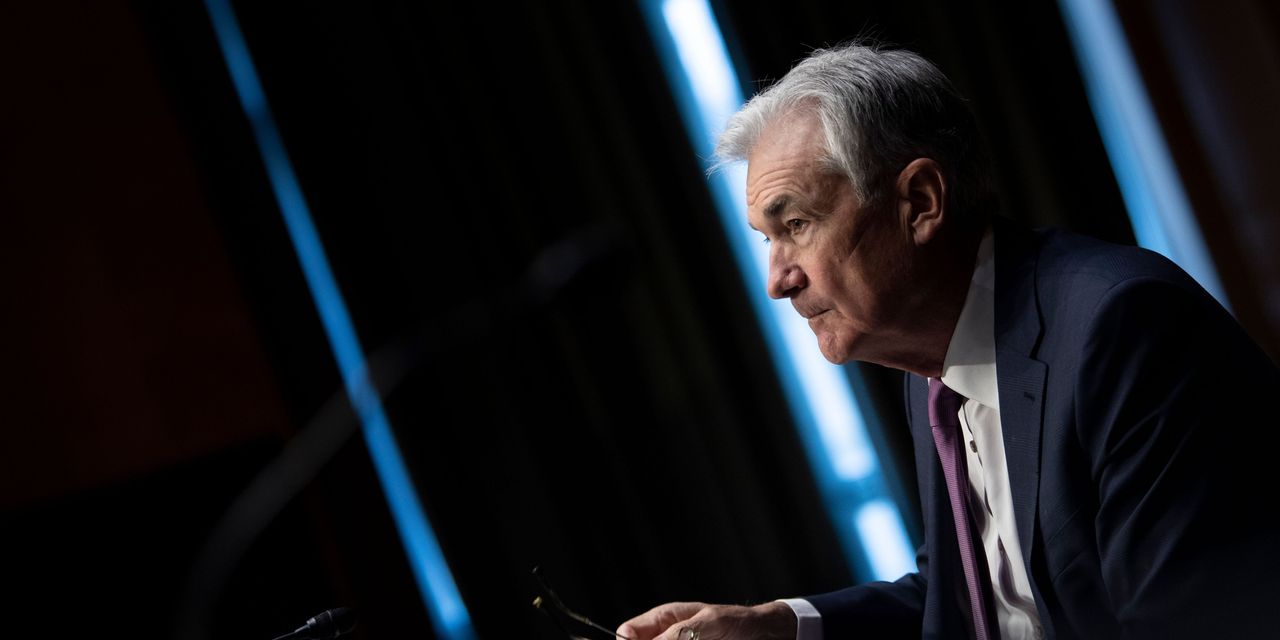 Mr Powell said he was optimistic that supply chain bottlenecks would ease this year to help bring inflation down as the Fed takes its foot off the accelerator. But he told lawmakers during his Senate confirmation hearing that if inflation remained high, the Fed would be ready to step on the brakes. “If we have to raise interest rates more over time, we will do it,” he said.

He said nothing to push back against expectations that have strengthened in interest rate futures markets over the past week that the central bank will start a cycle of interest rate hikes beginning in March.

In November, President Biden announced his intention to nominate Mr. Powell, a Republican, for a new term as head of the central bank after his current term expires next month.

Some lawmakers in the Senate Banking Committee expressed concern about recent Fed forecasts and policies on Tuesday. “I’m concerned that the Fed missed the boat by tackling inflation earlier,” said Senator Richard Shelby (R., Ala.). “Many of us are. And as a result, the Fed under your leadership has lost a lot of credibility.”

Most comments from lawmakers indicated that Mr. Powell would win confirmation comfortably with the support of members of both parties. “There is broad bipartisan support for Chairman Powell’s nomination because he has an experience of acting thoughtfully and constructively, especially in some very difficult circumstances,” said Senator Patrick Toomey (R., Pa.).

While providing a few details, Powell said the central bank could begin shrinking its $ 8.8 trillion portfolio of bonds and other assets later this year, which would be another tool for tightening financial conditions.

Compared to previous experience of shrinking the portfolio over the past decade, the process can now go “faster and faster, so much is clear,” he said. “We have to be both humble and a little nimble.”

“It’s really time for us to start moving away from these emergency pandemic settings to a more normal level,” Mr Powell said. “It’s a long way to normal from where we are.”

Fed officials leading regional banks in Cleveland, Atlanta and Richmond, Va., Said in interviews or speeches Monday and Tuesday that they would step in to raise interest rates as soon as March.

The upcoming transition – where the Fed uses both interest rates and the asset portfolio to repel stimuli – “could be a bumpy one,” Kansas City Fed President Esther George warned in a speech Tuesday.

For several months last year, Mr. Powell and his colleagues said they would not need to raise interest rates to bring down inflation because they believed high measures stemmed primarily from bottlenecks in the supply chain and other problems related to the reopening of the economy.

Mr. Powell changed course at the end of last year and said that the central bank was worried that inflation could stabilize and start an abrupt political turning point.

The shift was particularly striking on Tuesday because “it’s not just Powell’s testimony, but the symphony of voices” from other Fed officials who are not always on the same page, said Diane Swonk, chief economist at accounting firm Grant Thornton. “It’s amazing how hard the Fed has swung from patience to panic.”

Mr. Powell, who spent his career in investment banking and private equity, was first nominated to a seat on the Fed 10 years ago by President Barack Obama. Four years ago, President Donald Trump asked him to serve as chairman.

The Fed leader rejected concerns that the Omicron variant of the coronavirus, which has sent the number of patients with Covid-19 in US hospitals to new heights, will lead to a lasting decline in growth. “What we see is an economy working right through these waves of Covid,” Mr. Powell said.

In addition, shutdowns in China and other parts of the world could exacerbate the supply chain’s headaches, and pose an additional risk of higher inflation, he said.

High demand for goods and a shortage of intermediates such as semiconductors have pushed 12-month inflation to the highest levels in decades. Core consumer prices, which exclude unstable food and energy categories, were up 4.7% in November from the previous year, according to the Fed’s preferred measure. That is well above the Fed’s target of 2%.

Developments in the labor market, and not just high inflation readings, have fueled the Fed’s transition in recent weeks towards tightening policy much faster than was likely last summer.

Do you think Jerome Powell will continue to lead the Fed? Join the conversation below.

Unemployment, which fell to 3.9% in December from 5.9% in June, is now lower than it was four years ago, when Mr Powell became Fed chairman. This is despite the upheavals caused by the pandemic, which sent unemployment to a record high after World War II of 14.7% in April 2020.

Mr Powell said on Tuesday that officials had not only been surprised by the intensity of certain price pressures last year, but also by a drop in the number of Americans applying for jobs despite a high number of openings. Although there is no reason for the current high inflation, a smaller workforce “could be a problem going forward for inflation, probably more than these supply chain problems,” Mr. Powell said.

Achieving a strong recovery in employment that draws Americans into the workforce who are not actively seeking jobs “is going to take a long expansion,” Powell said. “To get a long expansion, we need price stability. And so in a way, high inflation is a serious threat to achieving maximum employment. “

Officials are placing more emphasis on the prospect that the aggressive fiscal and monetary policy reactions to the pandemic over the past two years may have changed traditional recession dynamics, and strengthened wage growth, which normally takes longer to recover from a downturn.

A sharp rise in home values, equities and other assets has increased the prosperity of many Americans, driven stronger demand and possibly caused some to retire earlier than they had expected, which tightened the labor market. Demand could rise even higher if the pandemic subsides, which increases the cost of services and leads to more Americans applying for jobs.

“What we have now is a mismatch between demand and supply,” Mr. Powell said Tuesday. The main issue for the Fed this year is boiling down to better coordinate supply and demand, he said, something the central bank can help to achieve by cooling the labor market.

Several former Fed officials have in recent days been critical of the central bank for waiting too long to empty reservoirs for easy money.

Although the Fed is right that sharp rises in the prices of used cars and other goods are reversing “and inflation is proving to be temporary, you now have a problem because the labor market is tight enough that wages will continue to accelerate,” the former New York Fed President William Dudley in an interview Monday on Bloomberg Television.

Mr Dudley said he believed the Fed would eventually need to deliberately slow the economy by raising short-term interest rates to 3% or 4%, a level that has not been reached in 15 years.

Other economists said they were concerned the Fed could overreact and trigger a bust that follows a boom. “The Fed is like a battleship,” Ms. Swonk. “It’s hard to turn, but once it’s done, you have to be careful where it goes, because it’s going to shoot bullets.”