FBI: No indication of threat to public after security investigation at Charlotte Douglas 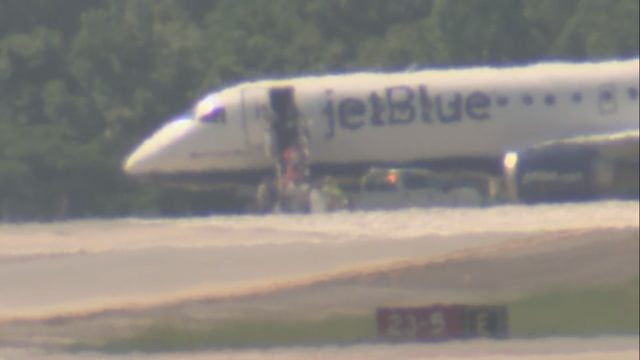 FBI: No indication of threat to public after security investigation at Charlotte Douglas

The FBI and the Charlotte-Mecklenburg Police Department said they responded to the airport shortly after 10 am. after a reported security concern.

In a statement to Channel 9, airport officials said "There is an investigation of a security incident on board and aircraft. More information to come."

Reporter Stephanie Tinoco was there if dozens of people were escorted off the plane and first responders swarmed the aircraft.

The FBI said the steps were taken throughout the investigation such as "deplanning passengers and rescreening them."

"The FBI and the Charlotte-Mecklenburg Police Department responded to the Charlotte-Douglas International Airport on May 19, 2019, after a reported security concern. A variety of steps were taken out of an abundance of caution including depleting passengers and rescreening them, along with a thorough search of the JetBlue plane, which was leaving Charlotte for JFK.

At this time, there were no indications there was a threat to public safety. "

A spokesperson from JetBlue also confirmed to Channel 9's Stephanie Tinoco the flight was "Delayed for additional security screenings out of an abundance of caution."

Local law enforcement is on site and we are working to get customers on their way to New York as soon as possible. ”

A passenger from Rockingham, North Carolina David Lathan called the WSOCTV newsroom shortly after he exited the plane. He said their plane was taxiing to the runway when they had to stop.

Lathan said the pilot then told the passengers there had been a "bomb threat."

>> We first updated WSOCTV news app users with a notification just before 12 p.m. Sunday that a "security investigation" was underway at Charlotte-Douglas. Download the WSOCTV news app for your smartphone and get updates on this developing story as they come in.

"He said that there's been a bomb threat," Lathan said. "There is going to be a policy coming up to the door, they're going to open the door. When they do, get your luggage, and exit the airplane." "

No other information has been released.

This is an ongoing investigation. Check back with wsoctv.com for more information.