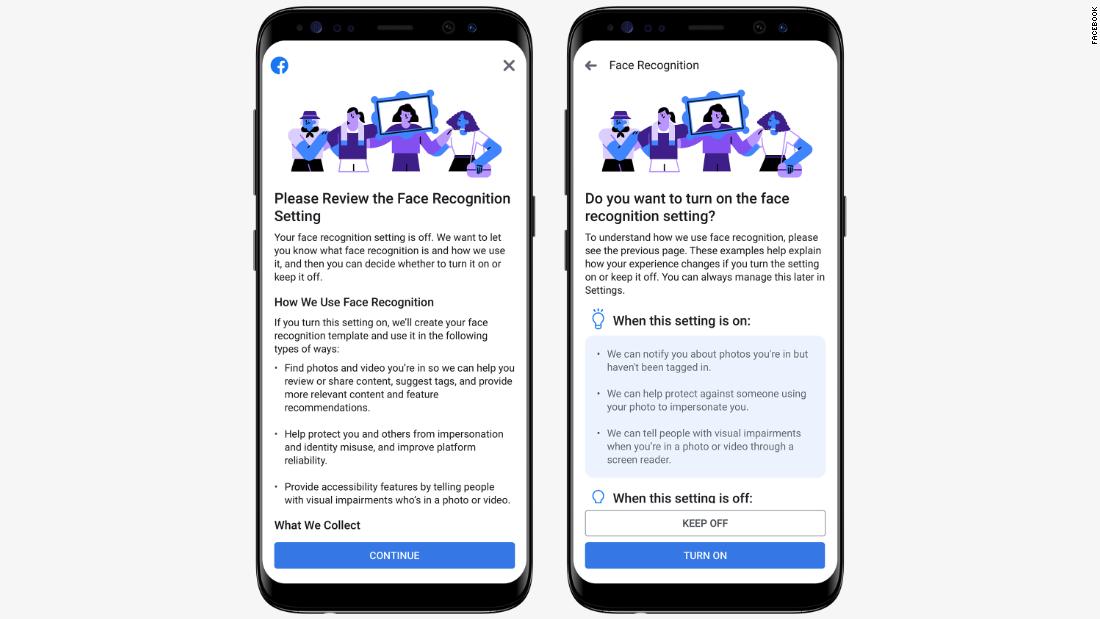 In a blog post Tuesday, Facebook ( FB ) said facial recognition will be off for all new users – unless they choose to turn it on – as well as for existing users who do nothing in response to an upcoming notification of the new settings. This means that face recognition is not used by default to recognize a user in photos or videos, or to suggest their friends to tag them in such content.

The company previously started offering some users a setting at the end of 2017 that allowed them to decide broadly whether face recognition was used in their Facebook experience or not. With the announcement on Tuesday, Facebook is expanding this option to all users.

Facebook said those who do not already have the feature will soon receive a notification in the news feeds about the change, along with an option to shut it off or turn it on.

Facebook relies on face recognition to send user notifications when their face is detected in a photo posted by a friend on the site – either person is tagged which can be helpful if someone is trying to use a photo of you as their profile picture. It also offered a feature called "tag suggestions" that used face recognition to automatically suggest users to tag specific friends in photos uploaded to the site. The company said that a visible setting for this feature would be discontinued.

The decision to change the settings comes amid growing turmoil around face recognition technology, which can be used at home, at school or in rock concerts to identify people. For example, a police department can use the technology on video or photo evidence in the hope of determining who has committed a crime. It is increasingly appearing on apps and online, including social networks such as Facebook. Some areas such as San Francisco and Oakland, California, have banned their city ministries, including local police, from using the technology, as part of a move to control government surveillance.
Facebook itself has faced legal scrutiny for the use of technology. Just a few weeks ago, a US appeals court in San Francisco rejected Facebook's attempt to undo a lawsuit alleging that the social network illegally used face recognition technology to collect millions of users' biometric data. The class action lawsuit was filed by Facebook users in Illinois, one of the few states with a law that requires companies to obtain customer consent before collecting biometric information.