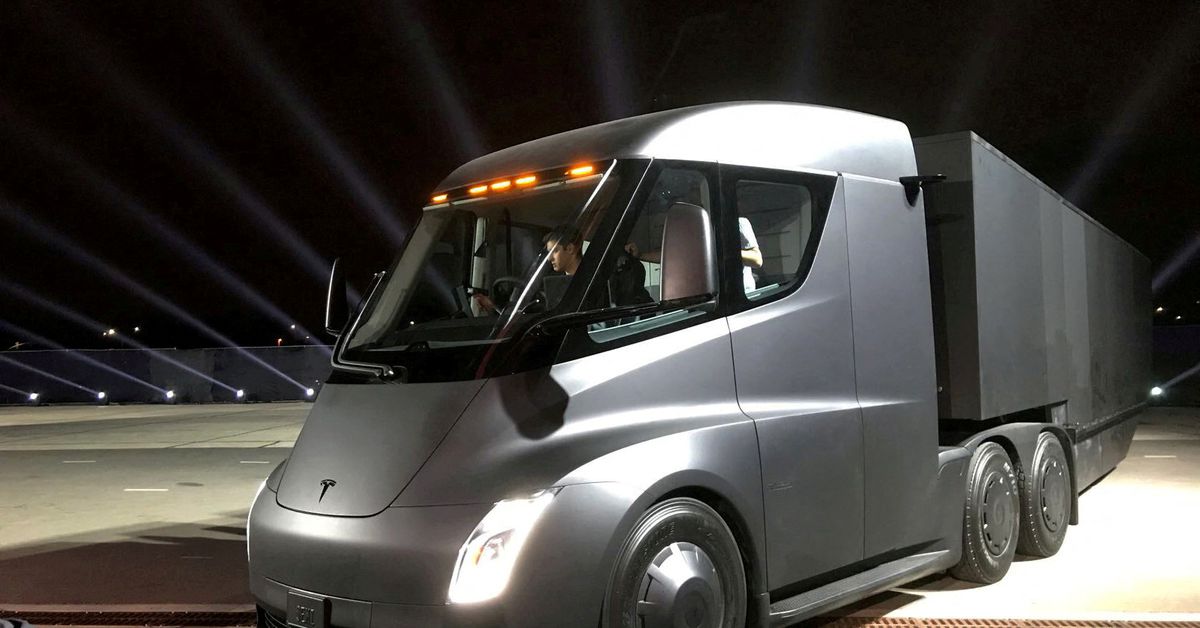 NEW YORK/SAN FRANCISCO, Dec 16 (Reuters) – PepsiCo plans to roll out 100 high-powered Tesla Semis by 2023, when it will begin using electric trucks to deliver to customers such as Walmart and Kroger, the soft drink maker’s top fleet official told Reuters on Friday .

PepsiCo Inc ( PEP.O ), which ordered the large trucks in 201[ads1]7, is buying them “outright” and is also upgrading its factories, including installing four 750-kilowatt Tesla Inc ( TSLA.O ) charging stations in both Modesto and Sacramento. locations in California, PepsiCo Vice President Mike O’Connell said in an interview. A $15.4 million state grant and $40,000 federal grant per vehicle help offset some of the costs.

“Like any early technology, the incentives help us build out the program,” he said, adding that there were “a lot” of development and infrastructure costs.

PepsiCo is the first company to experiment with the battery-powered Tesla Semis as a way to reduce its environmental impact. read more

PepsiCo’s plans to use Semis have been reported, but O’Connell provided new details about how the company is using them and the timeline for deploying them. Tesla CEO Elon Musk originally said the trucks would be in production by 2019, but that was delayed due to battery limitations.

PepsiCo said it plans to deploy 15 trucks from Modesto and 21 from Sacramento. It’s unclear where the others will be based, but O’Connell said the company aims to roll out Semis in the central U.S. next, and then the East Coast.

The company’s Frito-Lay division sells light foods, making it a good candidate for electric trucks, which have heavy batteries that can limit cargo capacity.

The semis will carry Frito-Lay food products for about 425 miles (684 km), but for heavier loads of soft drinks, the trucks will initially make shorter trips of about 100 miles (160 km), O’Connell said. PepsiCo will then also use Semis to transport beverages in “400 to 500 mile ranges as well,” O’Connell said.

“Having a trailer full of chips around is not the most intense, tough ask,” said Oliver Dixon, senior analyst at consultancy Guidehouse.

“I still think Tesla has a lot to prove to the broader commercial vehicle market,” Dixon said, citing Tesla’s unwillingness to offer payload and pricing information.

PepsiCo has earmarked some of the trucks scheduled for the Sacramento location to deliver to Walmart and grocers such as Kroger Co ( KR.N ) and Albertsons Cos Inc ( ACI.N ). The trucks at the Modesto Frito-Lay plant just went to PepsiCo distribution centers, O’Connell said.

All semi-series going to PepsiCo will have a range of 500 miles (805 km). O’Connell added that he is not aware of when Tesla will begin deploying 300-mile (480 km) trucks. Once Tesla starts building them, PepsiCo “will rotate them up” in its fleet, he said.

PepsiCo declined to share details about the price of the trucks, a figure Tesla has kept quiet. Competing vehicles sell for $230,000 to $240,000, said Mark Barrott of consulting firm Plante Moran. He added that the 500-mile range Tesla Semi can be priced higher because its 1,000 kilowatt-hour (kWh) battery pack is about twice the size of many of its competitors.

“We keep the trucks for a million miles, seven years,” O’Connell said. “Over time, the operating costs will pay for themselves.”

The Gatorade maker declined to share details about the weight of the trucks, another closely guarded secret by Tesla.

He said Tesla did not help pay for the trucks’ mega-chargers, but provided design and engineering services for the facilities, which come with solar and battery storage systems.

New York-based reporter covering US consumer products ranging from paper towels to packaged foods, the companies that make them and how they are responding to the economy. Previously reported on company boards and distressed companies.