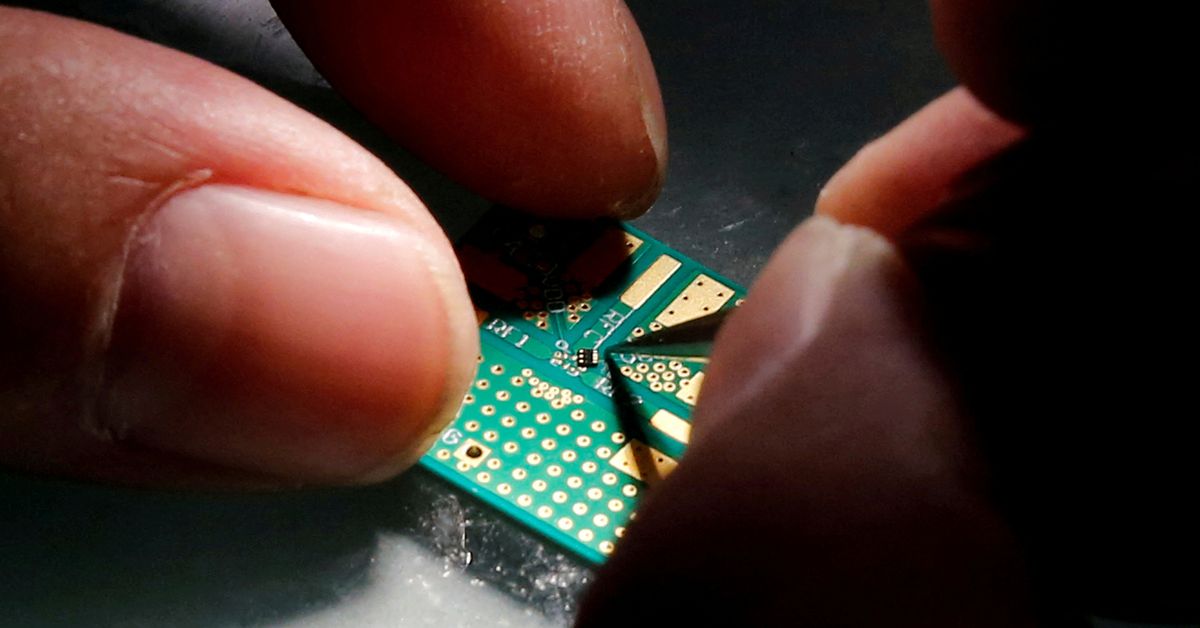 HONG KONG, Dec 13 (Reuters) – China is working on a support package of more than 1 trillion yuan ($143 billion) for its semiconductor industry, three sources said, in a major step toward self-sufficiency in chips and to counter U.S. moves aimed at slowing its technological progress.

Beijing plans to roll out what would be one of its biggest fiscal incentive packages, awarded over five years, mainly as subsidies and tax breaks to boost semiconductor production and research activities at home, the sources said.

It signals, as analysts have expected, a more direct approach by China to shaping the future of an industry that has become a geopolitical hot button due to soaring demand for chips and which Beijing sees as a cornerstone of its technological power.

It is also likely to raise concerns in the United States and its allies about China’s competition in the semiconductor industry, analysts say. Some US lawmakers are already worried about China’s chip manufacturing capacity.

The plan could be implemented as early as the first quarter of next year, said two of the sources, who declined to be named as they were not authorized to speak to the media.

The bulk of the financial aid will be used to subsidize the purchase of domestic semiconductor equipment by Chinese firms, mainly semiconductor fabs, or factories, they said.

Such companies will be entitled to a 20% subsidy on the cost of purchases, the three sources said.

The fiscal support plan comes after the US Commerce Department adopted a comprehensive set of regulations in October, which could, among other things, prevent research laboratories and commercial data centers from accessing advanced AI chips.

The US has also lobbied some of its partners, including Japan and the Netherlands, to tighten exports to China of equipment used to make semiconductors.

And U.S. President Joe Biden in August signed a landmark bill to provide $52.7 billion in subsidies for U.S. semiconductor manufacturing and research, as well as chip fab tax credits estimated to be worth $24 billion.

With the incentive package, Beijing aims to increase support for Chinese chip firms to build, expand or modernize domestic facilities for fabrication, assembly, packaging and research and development, the sources said.

China’s State Council Information Office did not respond to a request for comment.

The recipients will be both state-owned and private enterprises in the industry, particularly large semiconductor equipment firms such as NAURA Technology Group ( 002371.SZ ), Advanced Micro-Fabrication Equipment Inc China ( 688012.SS ) and Kingsemi ( 688037.SS ), the sources added.

Some Chinese chip stocks in Hong Kong also rose sharply on Tuesday after the Reuters report. SMIC (0981.HK) rose more than 8%, sending its daily gain to nearly 10%. Hua Hong Semiconductor Ltd (1347.HK) closed up 17%. Mainland markets were closed when the report was published.

Achieving self-reliance in technology featured prominently in President Xi Jinping’s full work report at the Communist Party Congress in October. The term “technology” was referenced 40 times, up from 17 times in the 2017 congressional report.

Xi’s call for China to “win the battle” in nuclear technology could signal an overhaul in Beijing’s approach to promoting its technology industry, with more state-led spending and intervention to counter US pressure, analysts have said.

The world’s second-largest economy has launched a trade dispute at the World Trade Organization against the United States over the chip export control measures, China’s Commerce Ministry said on Monday.

China has long lagged behind the rest of the world in the chip manufacturing equipment sector, which is still dominated by companies based in the US, Japan and the Netherlands.

A number of domestic firms have emerged over the past 20 years, but most remain behind their rivals in terms of ability to produce advanced chips.

For example, NAURA’s etching and thermal processing equipment can only produce 28 nanometer and above chips, relatively mature technologies.

Shanghai Micro Electronics Equipment Group Co Ltd (SMEE), China’s only lithography company, can produce 90 nanometer chips, well behind that of the Netherlands’ ASML, which produces those as low as 3 nanometers.