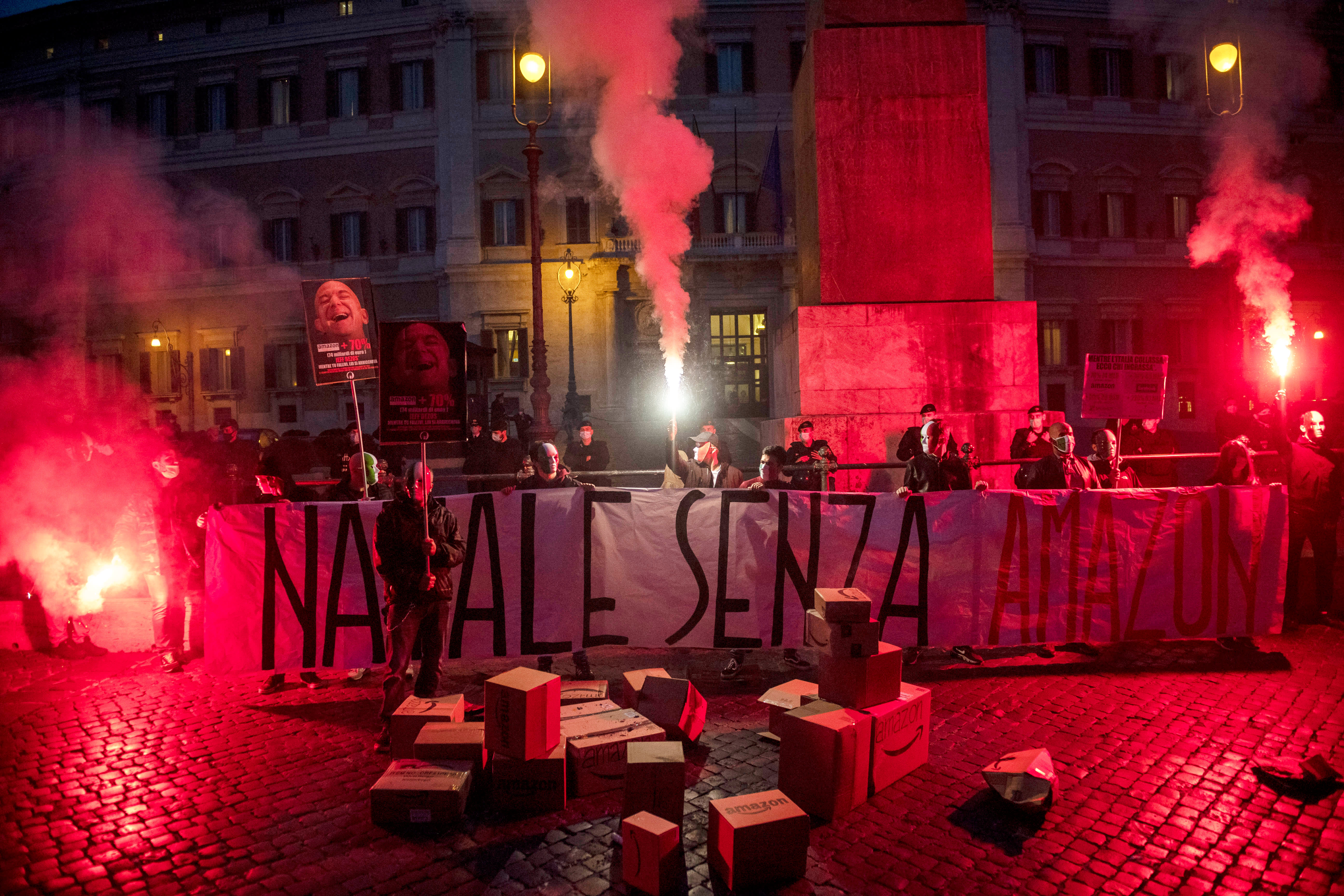 A protest against the multinational technology company Amazon during the Covid-19 pandemic, November 27, 2020, in Rome, Italy.

When Italy’s competition authority imposed a hefty fine of 1.13 billion euros ($ 1.28 billion) on Amazon last month, it was just the latest salvo in a series of moves against Big Tech.

The watchdog, Autorita Garante della Concorrenza e del Mercato, stepped up its actions over the past year with a host of decisions against the e-commerce giant, Alphabet̵[ads1]7;s Google and Facebook owner Meta, to name a few.

As for Amazon’s latest fine, the regulator took issue with the company encouraging Italian sellers to use its own logistics service, Fulfillment by Amazon, which the watchdog said was an abuse of its dominant position. It’s a charge that Amazon denies.

Renaud Foucart, senior lecturer in economics at Lancaster University in the UK, told CNBC that the significant monetary sanction on this occasion is part of a trend of national regulators acting against Big Tech companies because broader investigations at EU level can be “very slowly ».

AGCM has been very active. Through 2021, it imposed several fines on large American technology companies. In a separate case, Amazon and Apple were fined for alleged anti-competitive cooperation. It fined Google 102 million euros for “abuse of a dominant position” in its car software product, and in February they fined Facebook 7 million euros for the use of data.

The sanctions vary greatly in size, but have a similar message: National regulators will implement measures in their domestic markets.

But regulators like AGCM will not go without challenges in their rulings. Amazon struck back at the order and plans to appeal the $ 1.28 billion fine.

“The proposed fine and remedies are unjustified and disproportionate,” a spokesman said.

Maria Luisa Stasi, senior legal officer at Article 19, a non-governmental organization for digital rights, said it is not surprising that some national watchdogs, such as those in Italy as well as France and Germany, have taken their own initiative to go so powerful against Big Tech. .

“Some competition authorities in Europe are much more likely to go for sector investigations or market investigations where they think there is an environment where there may be some problems instead of waiting for complaints to come in,” she said.

It is not a coincidence, she added, that these surveys take place in markets with larger populations that have more developed digital target groups and consumers.

“In a number of the biggest cases we are seeing in Europe at the moment, they have been supported, if not initiated, by consumer associations or individuals who came together,” she said. “It’s more of a bottom up.”

However, she said, there will be issues of budget, resources and capacity, with regulators of all kinds facing obstacles with ever-increasing digital workloads.

Filtering through evidence and data, especially when it comes to Big Tech’s huge and global businesses, requires a lot of elbow grease that can strain budgets and knowledge.

“If you put a lot of protocols or codes on my desktop, I can not tell you if that software has been an instrument of a cartel or not because I can not read it. This can delay the process. A lot.”

She said she advocates for regulators to take temporary action against companies, for example by ordering a halt or restriction of a particular activity during an investigation instead of waiting until the investigation is completed, which could take years.

Other competition watchdogs have set up specialist units to address Big Tech. The UK’s Competition and Markets Authority, which has also accelerated its own actions against major digital players, last year established a dedicated technology unit to investigate digital giants. Most notable is that the CMA is locking horns with Facebook over the Giphy acquisition.

Major overhaul is underway in Europe

While those such as AGCM have acted on their own, the dynamics of competition regulation in Europe, especially around Big Tech, are undergoing a significant overhaul.

The Digital Markets Act is a comprehensive set of new EU regulations that are still in pregnancy, but are approaching the finish line. It will have a high priority for the EU Council, where the ministers meet to adopt laws, which are currently led by France.

DMA will tighten the rules for large technology companies – so-called gatekeepers – that are dominant in the market to prevent abuse. It will also introduce a greater scrutiny of agreements on mergers and acquisitions.

The European Commission, the EU’s executive arm, will conduct investigations into abuses or misdeeds by these gatekeepers.

Luisa Stasi said that the question of capacity and resources hangs over the DMA as well.

In the meantime, other national regulators – whether in competition law or other fields such as privacy and data protection – continue to implement measures.

But many regulators have to strain in the long run, he added.

“If you find [against] one of the big companies, you still have to win in court later. They can appeal at European level. “