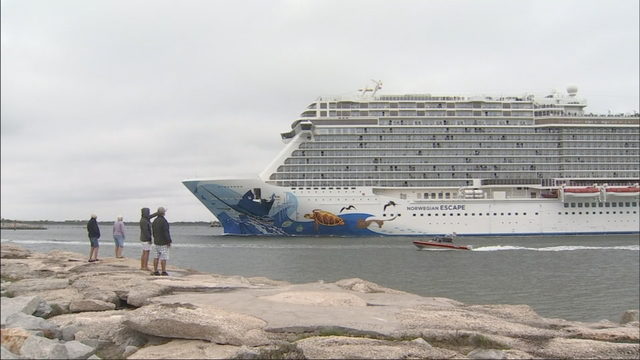 Several guests and crew members were injured aboard a Norwegian cruise ship late Sunday after an extreme gust of wind had shaken the ship and tilted it into the gate, according to the cruise line.

The cruise line said that there was no damage to the ship and that those injured were treated by the ship's medical staff.

The cruise line has not said how many people were injured. The ship can carry as many as 4,000 passengers and 1,700 crews.

Passenger Grace Corey said she and her boyfriend, Louis Kent, were on the ship's 15th floor.

"He actually opened the door to our balcony, and he just saw a wave coming to us," she said of her boyfriend. "He closed it very fast and was like," We have to get out of here. Something is not right. ""

Ambulances enter Port Canaveral, where the Norwegian escape anchored after a hard time on the sea. #WFTV pic.twitter.com/u1AvpXMjLw

Kent said it was clear that something unusual had happened.

"They have an art gallery," he said. "Art was broken. There was glass everywhere. There was a lot of damage."

Passenger Richard Green said he feared the ship could tip over.

Here is a better look at the Norwegian flight coming in. #WFTV pic.twitter.com/JO8dvJI5vr

Right before midnight Sunday March 3, Norwegian Escape met unexpected weather in the form of A sudden, extreme gust of wind, calculated at 100 knots, which resulted in the ship raising to the harbor side. (Continued)

Several injuries were reported, and those guests and the crew received immediate attention or are treated by the ship's medical staff. There was no damage to the ship; She remains fully operational and continues her planned itinerary. (Continued)

She is currently headed to Port Canaveral for an expected early arrival March 5. It is not expected that the current itinerary or next sailing will be affected.

Not near a TV? Click here to see WFTV newscasts live