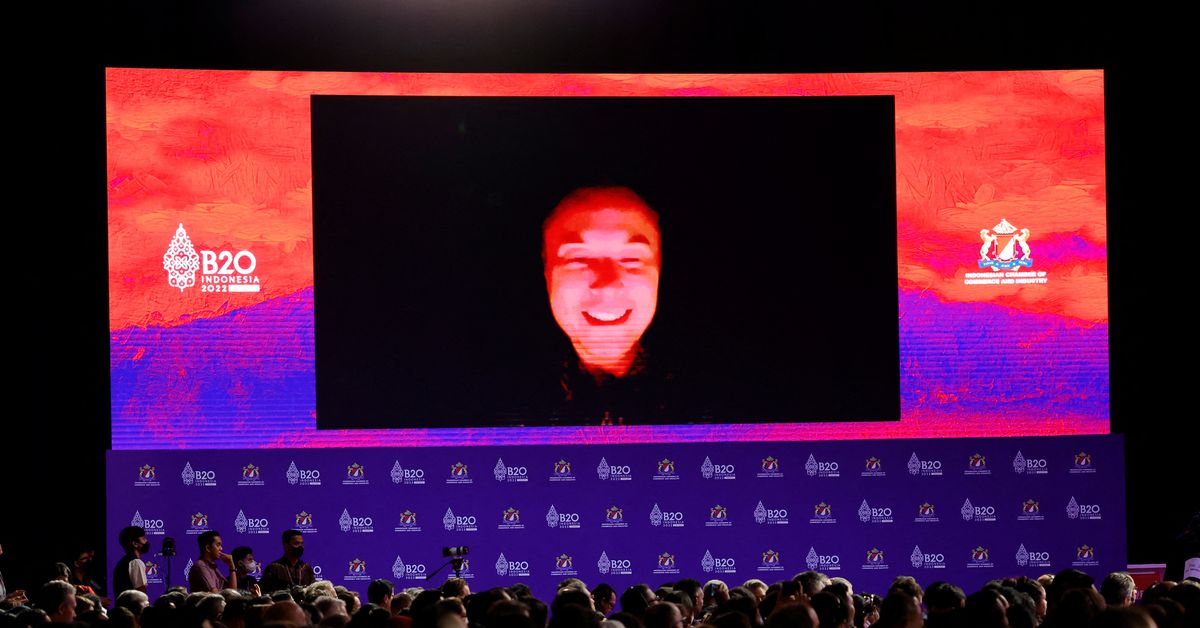 NUSA DUA, Indonesia, Nov 14 (Reuters) – Billionaire Elon Musk said on Monday he was working “at the absolute highest amount … from morning to night, seven days a week” when asked about his recent acquisitions of Twitter and his leadership from carmaker Tesla Inc ( TSLA.O ).

“I have too much work on my plate, that̵[ads1]7;s for sure,” Musk said by video link to a business conference on the sidelines of the G20 summit in Bali.

Musk is CEO of both companies and also runs rocket company SpaceX, brain-chip startup Neuralink and tunneling company Boring Company. Wearing a batik shirt sent by the organizers, he appeared on the screen lit by candles, explaining that he was speaking from a place that had just lost power.

Tesla investors worry that Musk, a self-confessed “nanomanager” who has been personally involved in work-level decisions from car styling to supply chain issues, is being distracted at a critical time for the world’s largest electric car maker.

Tesla’s shares have halved in value since early April, when he revealed he had taken a stake in Twitter. His Tesla stock sales, including another $4 billion last week to bring his Twitter-related sales to $20 billion, have added to the pressure.

Asked about the complexities of industrial supply chains being “disconnected” from China and the risks posed by Russia’s invasion of Ukraine, Musk returned to how busy he was.

Responding to an observation that many business leaders in Asia wanted to be the “Elon Musk of the East,” Musk said: “I want to be careful what you wish for. I’m not sure how many people would actually like to be me. . They would like to be what they imagine me to be, which is not the same as actually being me. The amount I torture myself is next level, honestly.”

Musk also said he wanted to see Twitter support more video and longer-format video so content creators could make a living on the platform, but did not provide details. His remarks were streamed live on Alphabet Inc’s ( GOOGL.O ) YouTube.

Indonesia has been trying to secure a deal with Tesla for battery investment and potentially a deal for SpaceX to develop a rocket launch site.

Musk did not commit to either, but said Indonesia had a big role to play in the electric vehicle supply chain and that it would make sense “long term” for SpaceX to have multiple launch points around the world.

It was not clear where Musk was during the Bali event. His personal jet has been in Austin, Texas, Tesla’s headquarters since the weekend, according to @ElonJet, a Twitter account that tracks Musk’s Gulfstream G650.

“I’m just watching this video and it’s so bizarre,” Musk said. “I sit here in the dark surrounded by candles.”

Musk added that he believed the economy would make the transition to sustainable energy, adding that it was “just a matter of how long it takes.” He said space exploration should remain a priority “so we can understand the nature of the universe and our place in it.”

“Maybe we will find alien civilizations or discover civilizations that existed millions of years ago, but we see the ruins of ancient civilizations. I think that would be incredibly interesting,” he said.