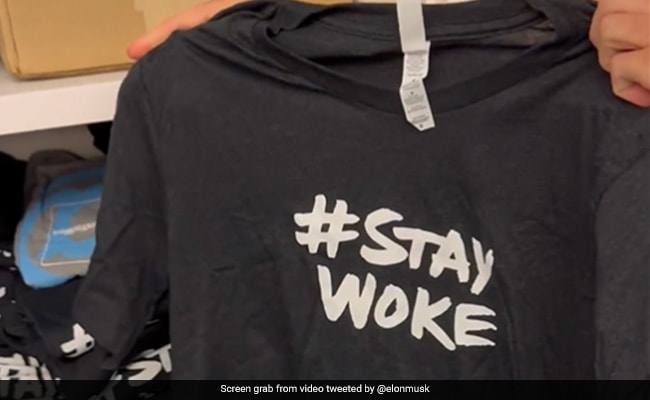 In less than a month, Musk has fired half of Twitter’s 7,500 employees.

Twitter owner Elon Musk, who recently found a closet full of “#StayWoke”[ads1]; t-shirts at the company’s headquarters, has come up with a new t-shirt design.

The Tesla and Space X founder tweeted a photo of a black t-shirt with “#Stay@Work” printed on it.

“Awesome new Twitter item!” Musk tweeted along with the photo.

Yesterday, Musk tweeted a video claiming to have found a locker at Twitter’s San Francisco office containing “#StayWoke” t-shirts. In the video, a person can be seen holding a black t-shirt with “#StayWoke” printed on it. As the camera pans, we see a number of similar black and blue t-shirts stored in a closet space. In the background, a person can be heard saying: “Here we are working on goods, and there is a whole cupboard with hashtag woke”.

Found in the closet at Twitter HQ fr 🤣🤣 pic.twitter.com/3xSI3KvvHk

After taking over Twitter, Musk reportedly instituted a no-holds-barred work ethic, creating a bitter “culture clash” with thousands of workers.

In less than a month, Musk has fired half of Twitter’s 7,500 employees, pulled out managers and engineers who disagreed with him and finally issued an ultimatum: work “extremely hardcore” or quit, reports the AFP news agency.

“If Election Commissioner is asked to take on PM…”: Supreme Court to Centre