Elizabeth Holmes, the founder of Theranos, accused by US prosecutors of defrauding hundreds of millions of dollars from investors, took a stand in her own criminal case and told jurors on Monday: “We thought this was a very big idea.”

The defense made the surprising move to call the 37-year-old to the stand last week, which gave her the chance to defend herself against allegations that she lied about the properties of the supposedly revolutionary Theranos blood test machine.

Holme’s testimony on Monday focused on Theranos’ formative days, part of a defense strategy to convince the jury that the young entrepreneur had wholeheartedly believed the technology was ambitious but possible.

Defense attorney Kevin Downey got Holmes to speak to the jury through several photos and technical slides. At one point, she used a computer mouse to point out individual components of an early Theranos machine.

An exhibition, a presentation slide apparently prepared by Ian Gibbons, then chief researcher at Theranos, described several milestones the team believed had been reached. Gibbons took his own life in 201[ads1]3, days before a clarification in a patent lawsuit about the company’s technology.

“I took away that we reached the design goals for this system,” Holmes said of the presentation, speaking slowly in her trademark low voice. “The system worked in a way that was excellent.”

In an apparent attempt to counter allegations that Theranos developed his technology in deep secrecy, the defense showed slides and documentation describing research partnerships and peer-reviewed studies.

Several were listed under the heading “Completed successes”, with examples including work that took place at London’s Royal Marsden Hospital in collaboration with the pharmaceutical company AstraZeneca.

Holmes’ appearance in the stands in the federal court in San Jose, California, will give the prosecution, which intends to paint a picture of her as a calculated liar, a chance to cross-examine Holmes. That grilling will hardly take place until after the American Thanksgiving party on Thursday.

“She does not have to prove her innocence,” said Amanda Kramer, a former federal prosecutor who is a partner in Covington & Burling. “She just has to create reasonable doubt in the minds of the jurors.”

“Defendant’s response to cross-examination. . . will be more spontaneous, less prepared, less experienced, “added Kramer. Defendants who testify in their own trials are rare, she said, “because it’s so risky.”

Holmes has been charged with wire fraud and conspiracy to commit wire fraud. She has pleaded guilty. If convicted, she risks a maximum sentence of 20 years in prison.

In a brief appearance on Friday, Holmes told the jury about the first days of creating Theranos when she was just 19. At most, the company was valued at $ 9 billion, and Holmes owned about half.

Journalists and spectators gathered outside the courtroom from around 3am on Monday while Holmes entered the courtroom just before 8am, flanked by her partner, Billy Evans.

From the back of the courtroom, John Carreyrou, the former Wall Street Journal reporter, saw articles about the company set in motion the chain of events that led to Holme’s downfall.

The media’s eagerness to follow the case is such that Judge Edward Davila admonished the room for loud, incessant writing while journalists tried to document Holmes’ testimony.

Beyond Holme’s fate, observers have suggested that the spirit of Silicon Valley itself is being tested, with questions about how responsible bold entrepreneurs should be if their ideas do not go as they should.

“Trying as hard as you can and falling short is not a crime,” Lance Wade, a lawyer for Holmes, said during the opening arguments. 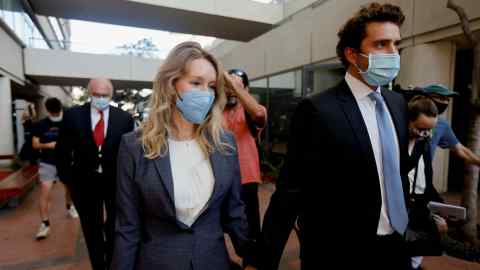 Holmes had promised that Theranos could greatly reduce the cost and discomfort of having blood taken and analyzed.

The Therano’s Edison machine was billed as a device about the size of a personal computer that could take a small amount of blood through a “nanotainer” and perform more than 200 tests. The small, half-inch vial became a central prop for Holmes as she graced magazine covers and conference scenes around the world.

Holmes’ first full day at the stand finally served a parade of notes describing how hard the young entrepreneur had actually tried, with glowing notes from qualified people expressing enthusiasm for the technology.

But the testimony has not yet addressed what happened to Theranos when the technology began not to live up to that optimism. Nor did it contradict the prosecution’s claim that Holmes, in pursuit of more money, would allegedly deceive investors about agreements Theranos had in place.

The trial began in the US federal state of San Jose, California, on August 31, after being delayed by Covid-19 restrictions and Holmes’ pregnancy. She gave birth to a baby boy in July.

In the 11 weeks leading up to his case on Friday, prosecutors summoned 29 witnesses, including former US Secretary of Defense Jim Mattis, who was a board member of Theranos and invested some of his money in the company.

With Holmes in the stands again on Tuesday, the defense is expected to claim that she was emotionally abused by Ramesh “Sunny” Balwani, CEO of Theranos and Holmes’ former girlfriend. Balwani’s lawyers have denied the allegations.