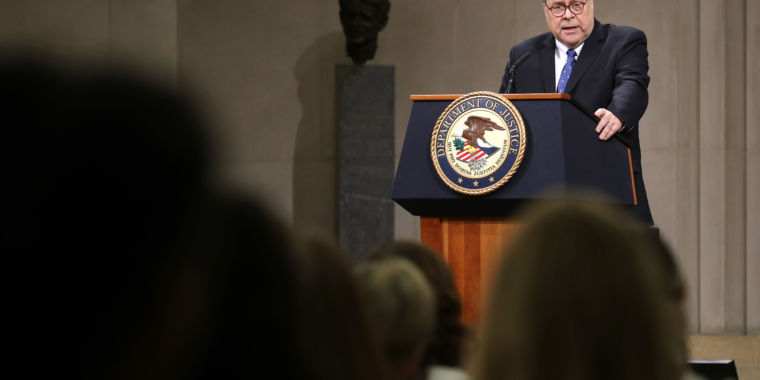 Facebook appears to be continuing to break records of all kinds. Generally, regulators at the Federal Trade Commission and the Department of Justice agree to conduct antitrust investigations against one company at a time, and determine in advance who should take the lead and conduct it. According to a new report, however, the US Attorney General has determined that a federal investigation just isn't enough.

"Prodding" by US Attorney William Barr has led the DOJ to launch its own antitrust investigation of Facebook, sources tell Bloomberg News. The DOJ will allegedly focus on behaviors not included in the FTC's current investigation.

The FTC's Bureau of Competition and DOJ's Antitrust Division share authority for enforcement of antitrust in the United States. When a specific case arises, such as a proposed merger or a complaint against a single company such as Facebook, the two agencies usually work out an agreement between those who want to put that ball in one court or the other court ̵

Facebook confirmed in July that it is the target of an FTC antitrust investigation. The Commission is reportedly considering competitive actions that Facebook allegedly has taken to stifle, intimidate or directly raise potential competition in the market.

Facebook may be unfairly stifling competition, but competition between regulators to investigate Facebook – and some of its digital brothers – seems absolutely robust.

Media reports surfaced in June, indicating that the FTC and DOJ had settled some sort of divide and conquest of Big Tech antitrust probes: the FTC would take on Amazon and Facebook, and the DOJ would delve into Google and Apple.

Bloomberg sources said that there has now been something of a territorial dispute between the two agencies, where leaders have exchanged letters on the subject. Senators pressured FTC chairman Joseph Simons and leader of the antitrust division Makan Delrahim about the turf war in a hearing earlier this month, and loudly wondered whether agencies were simply wasting resources by doubling their efforts.

The DOJ confirmed in July that its antitrust division was actively investigating widespread concerns expressed by "consumers, businesses and entrepreneurs" about "market-leading online platforms." The agency did not name, but the list of "market-leading" platforms is generally considered to include Amazon, Apple, Facebook and Google. However, "social media" was mentioned as a goal.

The federal regulators, but they solve the problem between them, have a whole lot of company.

Attorneys general for several states launched their own antitrust probe into Facebook earlier this month. New York State Attorney Letitia James, the leading coalition, said the probe would determine "whether their actions threatened consumer data, reduced the quality of consumer choices or increased the cost of advertising."

Congress has also jumped into battle. The House Antitrust Subcommittee launched an investigation in June, trying out "abusive behavior from platform sports watchers" including Apple, Amazon, Facebook and Google. The committee recently sent a massive data request to all four companies that want a decade's worth of records. The letter to Facebook (PDF) seeks records related to several of Facebook's previous acquisitions, including Onavo, WhatsApp and Instagram, as well as other analyzes, communications and legal submissions.

International regulators are also hard at work. Media reports indicate that the EU competition regulator has its own anti-trust probe of Facebook in progress, and member states such as Germany are also taking action.