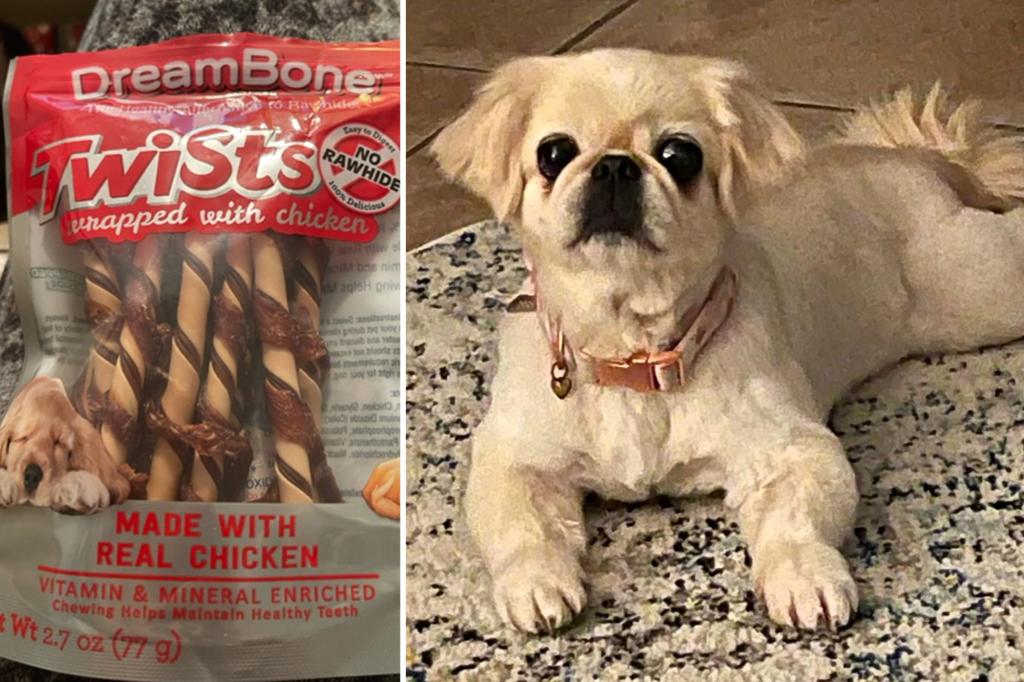 A dog food maker with a history of recalling contaminated products is accused of sickening hundreds of pets — and the recent death of a beloved Pekingese, The Post has learned.

DreamBone’s line of chews, made by $3 billion conglomerate Spectrum Brands Holdings, has come under fire from pet owners on message boards and from food and safety watchdogs.

A grieving owner, Liz Brannen, blames DreamBone Twists for causing her Pekingese, Boogie, to suffer an agonizing death on December 11.

Boogie started vomiting and having bloody diarrhea shortly after eating the treat. Within 24 hours she was gone, the tearful owner told The Post.

“She was screaming at the end and in so much pain, but she was completely normal the day before,”[ads1]; Brannen said. “It really bothers me that a company is selling something that can kill dogs.”

The Bellville, Texas, resident quickly found out she’s not the only heartbroken pet owner with a beef with DreamBone chews, which are sold by major retailers including Walmart, Target and Chewy.

Complaints about DreamBone span nearly a decade, but they began to mount in recent months on Safelyhq.com, a website that tracks consumer health and safety concerns.

This year alone, there have been 70 DreamBone complaints on the site, almost twice as many as in 2021, and most have been pouring in since October.

“The recent increase in reports mentioning DreamBone dog treats is of particular concern to us,” Safetyhq founder Patrick Quade told The Post. “There is a huge outlier in our data, in terms of the number of reports and the severity of the harm caused.”

“The FDA has received several dozen complaints related to DreamBone,” a spokesperson said in a statement. “We continue to look into these complaints, but we cannot respond to each individual case.”

DreamBone is mentioned in hundreds of posts on websites including Amazon, blogs and social media platforms such as Reddit from distraught customers whose dogs allegedly became ill or died after being given the treat.

The Middletown, Wis.-based company owns such diverse brands as Cutter bug repellent, Remington grooming products and Black + Decker appliances, but the majority of product recalls are in the pet care department.

Public Spectrum Brands did not respond to numerous emails and phone calls to senior executives.

Spectrum Brands recalled rawhide chews in 2017 after it discovered a supplier in Brazil had used an “ammonium compound” chemical that is “approved for cleaning food processing equipment” in its rawhide products, according to the company’s website.

Spectrum acknowledged that dogs may experience “stomach irritation, including diarrhea and vomiting” after eating the raw hides — including such brands as Digest-eeze and Healthy Hide — and may require treatment by a veterinarian “depending on the severity.”

The company acquired the troubled DreamBone brand in 2017 from New Jersey-based Petmatrix. The chews are produced abroad in Vietnam, Mexico and China and are marketed as “rawhide free” and “highly digestible”.

A year before the acquisition, Petmatrix was hit with a proposed class action lawsuit from a dog owner whose dog needed surgery after eating a DreamBone. The complaint alleged that the ingredients were “indigestible” and included a “large amount” of Soribtol, which is “widely characterized and classified, including by the FDA, as an indigestible sugar alcohol, and is used as a laxative.”

After the plaintiff’s dog, Maxie, was given a DreamBone, he began vomiting and had “bloody rectal discharge,” according to the complaint. Maxie underwent surgery to remove “a large piece of dog chew, which matched the description of DreamBone,” the complaint states.

The vet said “Maxie would have died,” if not for the surgery, according to the lawsuit, which was eventually settled, court documents show.

“The vet found pieces of DreamBone in her digestive tract,” Carlyle told The Post. “It wouldn’t dissolve.”

Spectrum offered to settle, “gave me and [another dog owner who was part of the proposed litigation] about $5,000 apiece,” Carlyle said. But she declined the offer and instead took her story to a local news station to warn other pet owners.

Logan Rothstein, who believes his 8-year-old Chihuahua, Hercules, died in 2019 because of DreamBone, has led a three-year campaign — reaching out to the FDA, retailers and the media — to raise awareness of the number of complaints against DreamBone.

“I don’t think Spectrum makes a consistently bad product,” Rothstein said. But he believes that because the product is made overseas, it likely has “very little quality control.”