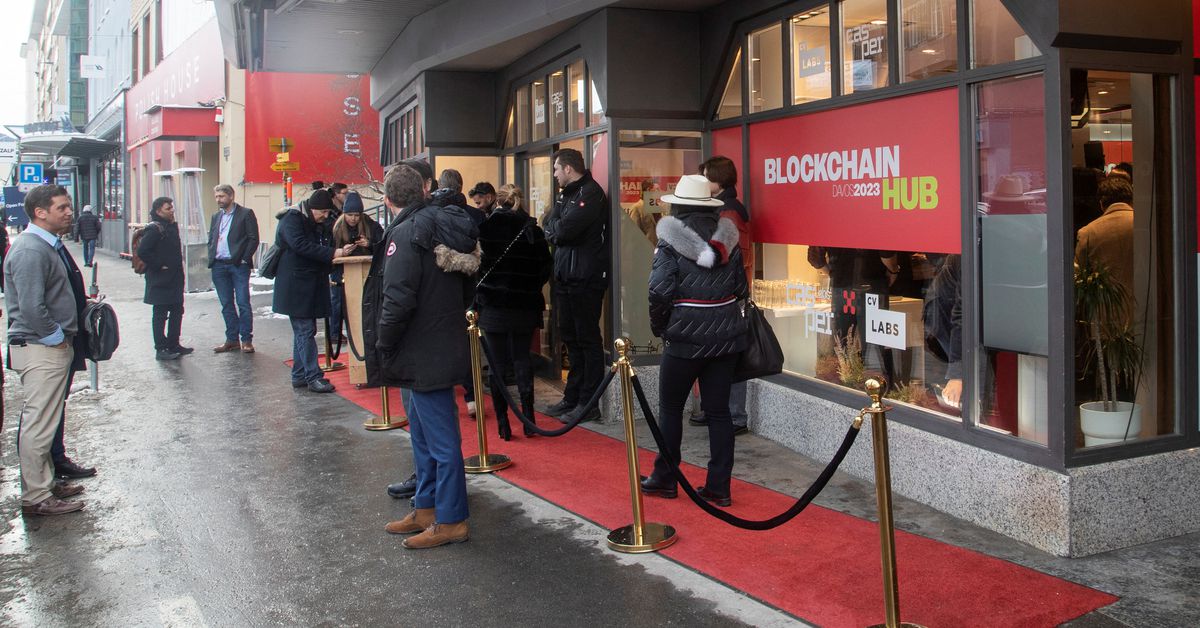 DAVOS, Switzerland, Jan 19 (Reuters) – In the snow and ice on the main drag in Davos, the impact of crypto winter is clear for WEF attendees to see.

Last May, the dressed-up storefronts along both sides of the Promenade street that runs through the Swiss ski resort were dominated by crypto firms rolling in bitcoin.

Now there are only a handful and the leaders who have made it to Davos have swapped their hoodies for blazers, despite the freezing temperatures outside.

Some of those in the digital industry who have established themselves on the fringes of the World Economic Forum (WEF) annual meeting were quick to distance themselves from cryptocurrencies.

“I hope there is an increased focus on utility and practical applications of the technology, and less focus on retail investors chasing meme coins,” said Jeremy Allaire, CEO of USDC stablecoin issuer Circle.

“There was a lot of nonsense,” Allaire told the Reuters Global Markets Forum.

“We are in the right place now in terms of crypto,” he said.

Leaders in Davos said they are now about blockchain technology, proper controls and regulations, and the promise of disruption it holds for financial services and beyond.

“We are an infrastructure, plumbing. We are building infrastructure today for digital assets, which is crypto. Tomorrow it will be other assets,” said Dmitry Tokarev, CEO of Copper, which provides custody services.

“I would question some of the things I saw, ‘What’s the return on that?'” Tokarev added, referring to the large presence of crypto companies at the last WEF meeting, unusually held in May as a result of Covid-19 pandemic.

“We have always ignored the noise. All our partners were here last year. They are here this year,” Tokarev added.

The world of digital assets has changed drastically since May, with the value of the crypto market plunging and some of the major crypto companies going under as investors pulled back from riskier assets in the face of rising interest rates.

The market value of cryptocurrencies has shrunk by $1.4 trillion, a third of its value from the peaks reached in late 2021, and some of the best-known crypto firms are under stress or have gone under, including the collapse of crypto exchange FTX.

“There is a place for trading use cases, but they can’t be the singular focus, we need to move to more real use cases and put the focus there,” said Denelle Dixon, CEO of the Stellar Development Foundation, which supports the Stellar blockchain.

While the interest in the technology remains, the conversation turns to responsibility.

Colm Kelleher, chairman of Swiss bank UBS ( UBSG.S ), told a WEF panel that blockchain technology will help reduce costs for banks. But he said the industry needed to figure out the basics, such as anti-money laundering controls.

“We kind of dodged a bullet,” Kelleher said, noting that the collapse in the value of cryptocurrencies had not caused systemic problems. “We had investors who wanted to invest in coin. And we had to draw a line on what was appropriate for those investors,” he added.

“These are companies with serious cash and income generating companies,” Siu said. “They are billion dollar companies.”

Crypto is trying to establish its presence, said SkyBridge Capital founder Anthony Scaramucci, adding “there is nothing more establishment than the World Economic Forum.” Scaramucci maintains a bullish stance on crypto despite losses last year.

Back on the Davos boardwalk, there are some signs of crypto’s lost steam.

Parked right outside a pavilion promoting blockchain earlier this week was a bright orange Mercedes.

On the hood, instead of the automaker’s insignia, there was a copper-colored symbol for bitcoin.

The tires carried a slogan in white: “In Bitcoin we trust”.

For daily Davos updates in your inbox, sign up for the Reuters Daily Briefing here