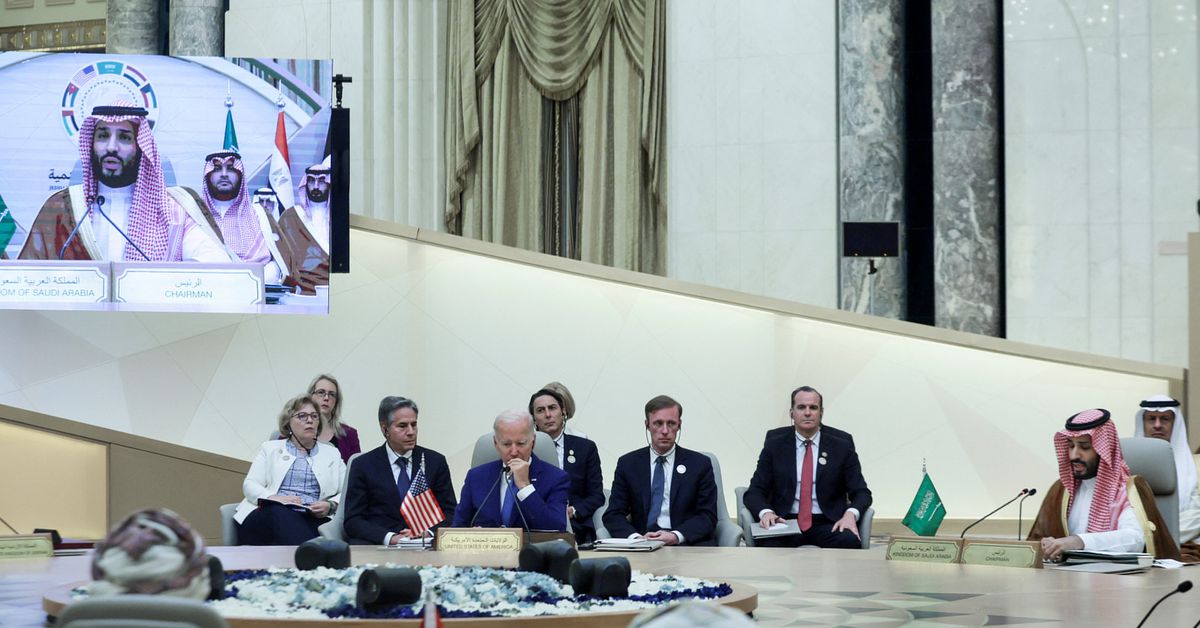 WASHINGTON/LONDON, Oct 8 (Reuters) – OPEC+’s decision this week to cut oil production despite stiff U.S. opposition has further strained already strained relations between President Joe Biden’s White House and Saudi Arabia’s royal family, once one of Washington’s staunch ally in the Middle East. , according to interviews with about a dozen government officials and experts in Washington and the Gulf.

The White House was pushing hard to prevent the OPEC production cut, these sources said. Biden is hoping to prevent US gas prices from rising again before the midterm elections in which his Democratic Party is struggling to maintain control of the US Congress. Washington also wants to limit Russia’s energy income during the Ukraine war.

The US administration lobbied OPEC+ for several weeks. In recent days, senior U.S. officials from the energy, foreign policy and economic teams have urged their foreign counterparts to vote against an output cut, according to two sources familiar with the discussions.

They failed to prevent a production cut, just as Biden did after his own visit in July.

US officials “tried to position it as ‘us versus Russia,'” said a source briefed on the discussions, telling Saudi officials they had to make a choice.

That argument failed, the source said, adding that the Saudis said that if the U.S. wanted more oil in the markets, it should start producing more of its own.

The United States is the world’s No. 1 oil producer and also its top consumer, according to data from the US Energy Information Administration.

The Saudi government’s media office CIC did not respond to Reuters’ emailed requests for comment on the discussions.

OPEC weighs its interests with “those of the world because we have an interest in supporting the growth of the global economy and providing energy supplies in the best way,” he said.

Washington’s handling of the Iran nuclear deal and withdrawal of support for a Saudi-led coalition’s offensive military operations in Yemen have angered Saudi officials, as have actions against Russia following its February 2022 invasion of Ukraine.

A US push for a price cap on Russian oil creates uncertainty, Energy Minister Prince Abdulaziz bin Salman told Bloomberg TV after the OPEC cut, noting “the lack of detail and the lack of clarity” on how it will be implemented.

A source briefed by Saudi officials said the kingdom sees it as “a non-market price control mechanism, which can be used by a cartel of consumers against producers.”

A Biden-directed sale of 180 million barrels of oil in March from the US Strategic Petroleum Reserve put pressure on oil prices. In March, OPEC+ said it would stop using data from the International Energy Agency (IEA), a Western oil watchdog, because of Saudi-led concerns that the United States had too much influence.

On Thursday, Biden called the Saudi decision “a disappointment,” adding that Washington could take further action on the oil market.

“Look, it’s clear that OPEC Plus is aligned with Russia,” White House press secretary Karine Jean-Pierre said Wednesday. She will not elaborate on how the production cut will affect relations between the US and Saudi Arabia. In the US Congress, Biden’s Democrats called for the withdrawal of US troops from Saudi Arabia and talked about taking back weapons.

“I thought the whole point of selling arms to the Gulf states despite their human rights abuses, frivolous Yemen war, working against American interests in Libya, Sudan, etc., was that when an international crisis came, the Gulf could choose America over Russia /China,” Sen. Chris Murphy, a Democrat, said on Twitter.

Saudi Arabia’s Foreign Minister Adel Al-Jubeir said in comments to Fox News on Friday when asked about the US criticism: “Saudi Arabia does not politicize oil or oil decisions.”

“With respect, the reason you have high prices in the U.S. is because you have a shortage of refining that has existed for more than 20 years,” he added.

The prince, son of King Salman, 86, has denied ordering the killing but acknowledged it happened “under my watch”.

The prince became prime minister last month, and his lawyers have argued in a US court that this makes him immune from prosecution in the Khashoggi death.

Biden’s trip to Jeddah, Saudi Arabia in July for a Gulf summit was aimed at patching up relations, but he also harshly criticized bin Salman over the killing of Khashoggi.

Ben Cahill, a senior fellow at the Center for Strategic and International Studies, said the Saudis hope the production cuts will give OPEC+ control over oil prices and ensure enough oil revenue to protect their country from a recession.

“The macroeconomic risks are getting worse, so they have to respond,” Cahill said. “They are aware that a cut will anger Washington, but they control the market.”