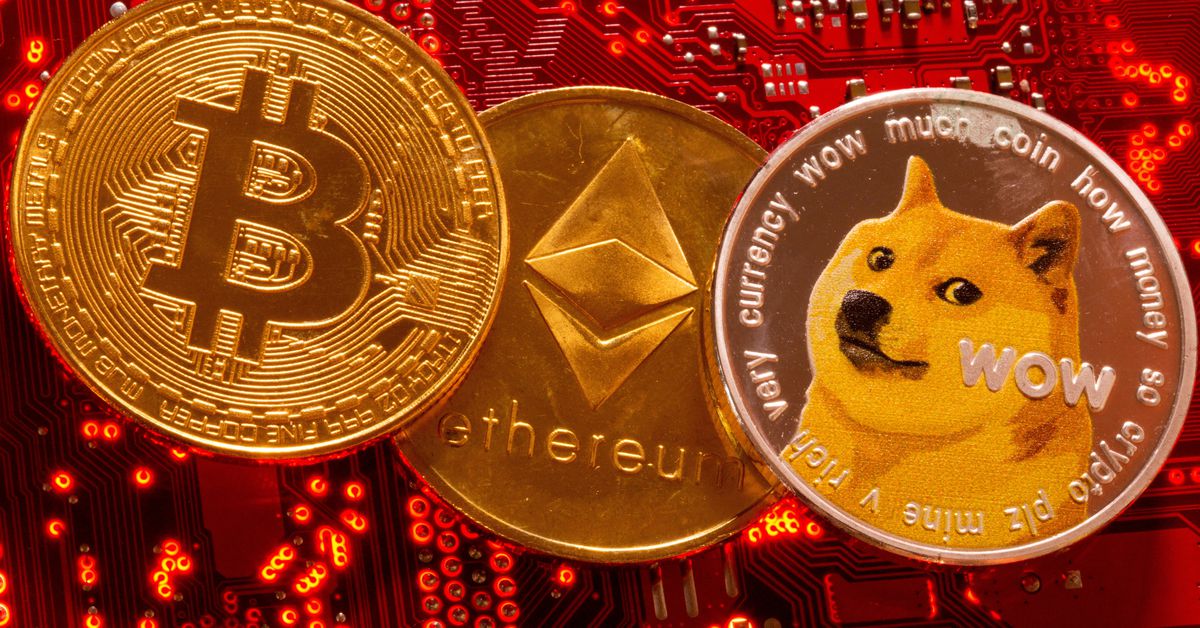 Jan 17 (Reuters) – Bitcoin is on the charge in 2023, pulling the crypto market off the floor and electrifying bonk, a new meme coin.

The No. 1 cryptocurrency has rallied 26% in January, jumping 22% in the past week alone, breaking back above the $20,000 level and heading for its best month since October 2021[ads1] – right before the big crypto crash.

Ether has also risen, up 29% this year, helping drive the value of the total global cryptocurrency market to over $1 trillion, according to CoinGecko.

“After a tough year last year for crypto, we’re seeing some form of mean reversion,” said Jake Gordon, analyst at Bespoke Investment Group, referring to the theory that asset prices are returning to long-term averages.

Researchers said investor bets on a more rosy macroeconomic picture drove a jump in riskier assets across the board.

Few crypto tokens have benefited more than bonk, which launched in late December on the Solana blockchain and had risen 5,000% by early January. It has since fallen back, but is still up 910% since the start of the year.

It’s the latest entrant into the hyper-volatile world of meme coins, cryptocurrencies inspired by online memes and jokes, and is modeled after the same grinning Shiba Inu dog as dogecoin — itself catapulted to fame by Elon Musk tweets.

However, Bonk is a puppy.

“They fall as hard as they rise.”

Nevertheless, some market players pointed to the relative cheapness of these tokens – the doge is worth about eight cents – as a reason why speculators were willing to bet on them.

“Meme coins belong to crypto, it’s part of the culture,” said Martin Leinweber, product specialist for digital assets at MarketVector Indexes. “It only takes a few lines of code to create a meme token, and if you have a community for it, people love it.”

Bonk is a meme coin with a mission. It was created in part to support the Solana blockchain, which has seen an exodus of funds and users since crypto exchange FTX filed for bankruptcy in November, and its original Solana token fell over 37%.

The Solana token has now really jumped as bonk has gained traction: it is up 131% in 2023, the biggest gain among major cryptocurrencies.

“The rumors of Solana’s death appear to have been greatly exaggerated,” said Tom Dunleavy, senior analyst at data firm Messari. “Despite the recent price rally seemingly driven by speculation, the underlying ecosystem remains quite strong.”

TOO EARLY TO CALL A CRYPTO REVERSAL

Some researchers chalked up the crypto gains to optimism that inflation had peaked, reducing the need for tighter central bank policy.

“Bitcoin and crypto tend to be ahead of everything, which is why we’ve seen significant relative strength in this asset class lately,” Wave Financial’s Borsai said.

There has certainly been an increase in activity.

The dollar value of bitcoin trading volumes on major exchanges over a 7-day period jumped to $151 million, the highest in nearly two months, according to data from Blockchain.com.

Total bitcoin flows – which represent all usage including trading and payments – have increased by 13,130 bitcoin on average over the past 7 days, the biggest increase in 64 days, Chainalysis data showed.

“It is premature to declare a definitive reversal for the crypto market despite the recent strength we have seen lately,” said Aaron Kaplan, co-founder of Prometheum, a digital asset trading platform.

“If interest rate hikes are below what the market expects, risk assets will benefit and crypto prices will likely continue their uptrend, but there is just too much uncertainty right now.”

Reporting by Medha Singh and Lisa Mattackal in Bengaluru; Editing by Pravin Char

The opinions expressed are those of the author. They do not reflect the views of Reuters News, which is committed under its fiduciary principles to integrity, independence and freedom from bias.