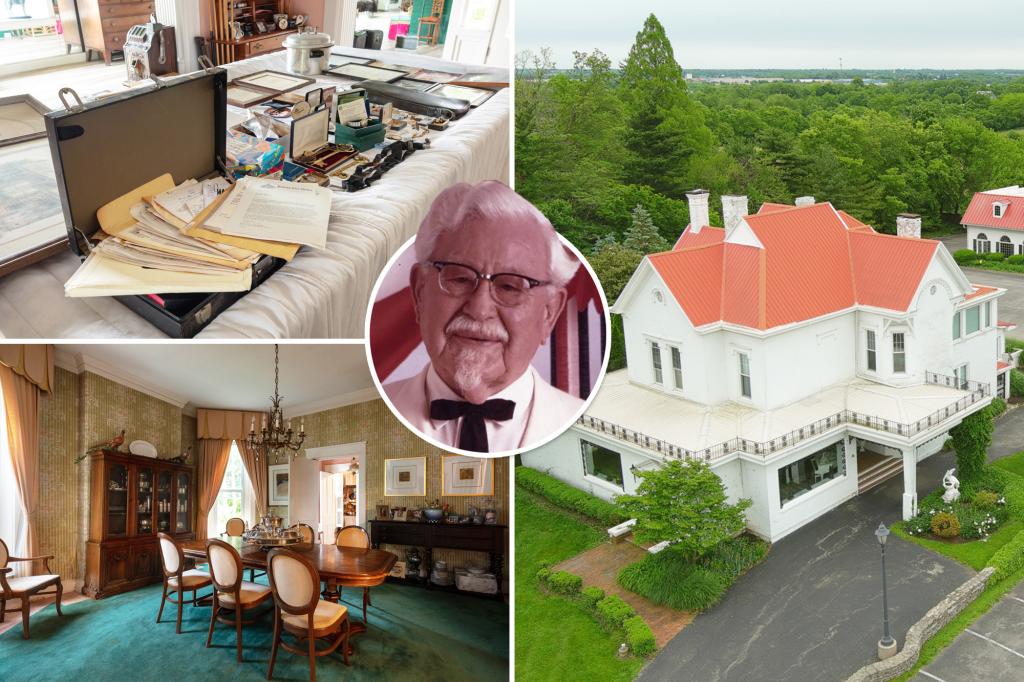 A bid to sell a historic restaurant and mansion once owned by Colonel Sanders and his wife has struggled to take off — in part because the deal ruffles the feathers of KFC’s business owner, The Post has learned.

Claudia Sanders Dinner House – a 63-year-old diner in Shelbyville, Ky. which attracts locals and tourists with its fried chicken, cole slaw and homemade pies – went on sale in June. Some interested buyers say they want to franchise and expand their footprint outside the city for the first time.

But the prospect of a rival fried chicken chain using the Sanders name has attracted the attention of KFC’s parent YUM! Brands, whose legal team filed an application with the US Patent & Trademark Office days after the properties were put up for sale.

“It’s a very unique situation,” said Jonathan Klunk of Six Degrees Real Estate, which has been hired to sell the properties. “We’re selling Claudia and she doesn’t have as much name recognition as her husband, but a buyer can’t describe her without mentioning both her husband and KFC.”

Col. Harland Sanders married Claudia in 1949 and opened the Claudia Sanders Dinner House for his wife in 1959 on a 3-acre property that also includes their 5,000-square-foot private residence known as Blackwood Hall. Sanders lived out his final years at Blackwood Hall before his death in 1980 aged 94. Claudia died in 1994 aged 90.

The property has been in the hands of Sanders family friends Tommy and Cherry Settle since the 1970s. Cherry, who is 78, was a hostess at the restaurant when she and Tommy, now 80, bought the property from Sanders. Tommy had run a plant that supplied the restaurant with hams. The couple run the restaurant and currently live in Blackwood Hall, but want to retire.

YUM! did not return multiple calls and emails for comment, but KFC is famously secretive about its fried chicken recipe, Sanders’ original 11 spices and herbs. Klunk says that there are “many similarities” between the restaurants’ menus, but that the diner “has no connection to the KFC recipe”.

The Settles had a run-in with YUM! in 2001 when Tommy found a leather-bound date book from 1964 in the basement of Blackwood Hall that belonged to Colonel Sanders and contained a list of 11 herbs and spices. Settle wanted to authenticate the recipe so he could sell it, according to reports at the time, but YUM sued him to keep it private until the company could process it. The lawsuit was dropped when YUM! claimed that the recipe was not even close to the original.

YUM!, a $6.5 billion conglomerate headquartered in Louisville, Ky. which also owns Pizza Hut and Taco Bell, has not expressed interest in buying the restaurant brand or the property, Klunk said.

The Settles are seeking $9 million for their intellectual property as well as the two buildings, the three-acre lot and some memorabilia, including the first KFC flag and bucket and a birthday letter to Sanders from President Richard Nixon. A 2013 auction of the colonel’s memorabilia that included one of his white suits brought $21,510 and his 1973 Kentucky driver’s license went for $1,912.

So far, interested buyers include local and large restaurant groups, serial entrepreneurs who have global businesses and even some local bourbon brands, according to the real estate firm.

A potential buyer has talked about turning the colonel’s house into a high-end Airbnb rental, while a pair of Kentucky bourbon brands are considering expansions into comfort food, Klunk said. Others are exploring licensing their popular dishes, especially the famous yeast rolls, for sale in supermarkets, Klunk said.

But none of the bidders move forward until they talk to YUM! about what they can do with the brand without inviting litigation.

“If you want to use the Claudia Sanders brand, you have to have a team of intellectual property lawyers,” Klunk tells potential buyers.

Claudia Sanders Dinner House has been a mainstay in Shelbyville, Ky. since 1959, and even served as the first KFC headquarters for a time. The menu includes boxes of chicken wings, thighs and tenderloins, yeast rolls, creamed spinach, coleslaw and homemade pies.

It is one of the few businesses in the area that has a liquor licence. Locals celebrate holidays, weddings and reunions in the grand two-story pavilion that features wide patios.

Even international tourists, particularly from Japan – where KFC is one of the Christmas dinners – have posted pictures of themselves roaming the vast car park between the dinner house and Blackwood Hall.

The restaurant has peacefully coexisted with the fast food empire, largely because Sanders and Settles have never aggressively promoted the brand or featured it on social media.

That may change — but it won’t be easy to slap the Sanders name on other restaurants that sell chicken, said Brad D. Rose, a trademark attorney at Pryor Cashman who is not involved in the case.

“Whoever is going to take on the Claudia Sanders name is probably going to have an uphill and expensive battle,” Rose said.