Kraft Heinz (NASDAQ: KHC) is the third largest food and beverage producer in North America. It goes through a difficult period due to external pressure (retailers are getting stronger, consumers are demanding healthier products …). Investors are quite negative (the YTD share is down about 25% and 1Y is down 51%). But my task is a little different than what the market perceives it today. I look at this story from a contra-angle and with the long-term horizon in my mind.

Buffett recently talked about this topic, and here's what he said:

"There is some change in habits, but if you think about it, people don't change their habits so much. There hasn't been a big change. Physical volume hasn't changed much. "

I agree with Buffett. There are some changes in consumption habits, but they are not revolutionary. At the end of the day, branded consumer manufacturers will adapt to them.

The battle between brand manufacturers Vs. Retailers

If we shift our attention to the battle between brand manufacturers and retailers, we can see a big challenge. In the US, private labels have gained market share in recent years. And despite the recent growth of private labels in the United States, penetration is still lower than many other parts of the world. 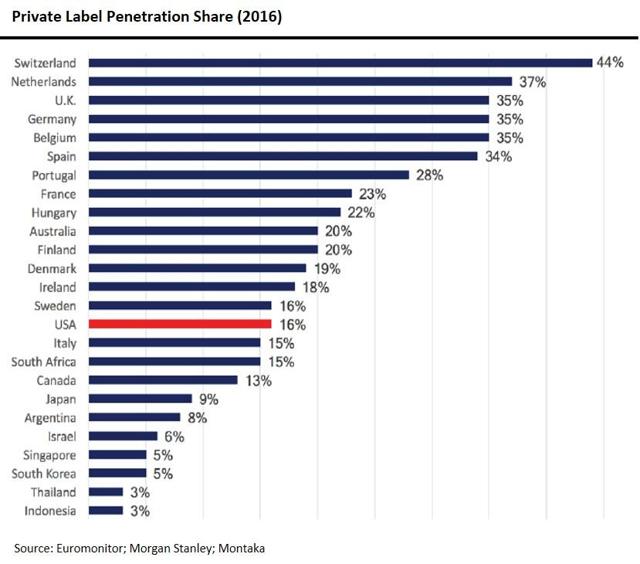 "We have learned that in recent years, as the battle between the dealers and the brands has shifted towards the dealers. The ability to price though has been changed. And that is huge."

This is a real challenge for Kraft Heinz, and if they want to improve their position, they must find a solution. It looks like a rather difficult / impossible task, but we should believe in human / business creativity and ability to survive / adapt.

Let's say this way. For me, the earning power is a company's ability to make money for its stakeholders (primarily equity holders). Since 2016, Kraft Heinz has generated Adjusted EBITDA of around $ 22.8 billion. However, reported cash flows from operations under the standard accounting rules for the same period were significantly lower. First, the gap is due to changes in accounting rules that reduced the operating flow of a number of companies, including Kraft Heinz. So, I made my own assessment of operational cash flow and free cash flow. I have repaid cash deposits on sold receivables, pension and post-retirement pension plans and restructuring costs.

-K for 2018, and they do not include a cash flow statement in the earnings release for Q4 2018. Therefore, I only present figures for 9M 2018. Based on what I get from adjustments, I believe operational cash flow for the company should be in the surrounding area $ 5 billion Kraft Heinz has CAPEX around $ 1 billion. Therefore, Kraft Heinz should generate the FCF of around $ 4 billion.

At the end of 2018, net debt was around $ 30 billion. In October and November last year, Kraft Heinz made two departures. In October, Indian brands Complan, Glucon-D, Nycil and Sampriti sold to Zydus Cadila at a valuation of around $ 625 million. In November, they sold their Canadian natural cheese business to Parmalat for a purchase price of approx. $ 1.23 billion. Overall, they gathered something of around $ 1.85 billion. Kraft Heinz intends to dedicate the provision from the sale of its India beverage and Canada's natural cheese business to debt reduction. This should provide a good template for further action.

According to media rumors, Kraft Heinz weighs the sale of Breakstone's escape and cottage cheese business. The business could gain a valuation of around $ 400 million. They also consider options for their Maxwell House coffee company. The coffee company has about $ 400 million in EBITDA and can attract at least $ 3 billion in sales.

If we exclude future disposals, then I think the Kraft Heinz net loan level should be around $ 26-27 billion at the end of this year.

It is worth noting that Warren Buffett is one of the biggest investors all the time, plus 3G gives top table efficiency. 3G has taken the world of consumer founder of aggressive M&A based on an intensive focus on cost management. They worked with zero-based budgeting, which has led to major improvements in EBITDA margins. It works fine during the previous decade, but there are some clouds about "their way". Jorge Paulo Lemann spoke openly about their mistakes:

"I've lived in this cozy world of old brands and big volumes. We bought brands that we thought could last forever and borrowed cheap money to do it. You can only focus on to be very effective … Suddenly we are disturbed. "

I would say it was a good explanation of what happened to them.

Despite some errors, I believe that Kraft Heinz has a unique combination of owners who have long-term horizons and rare kinds of efficiency.

Regarding the ongoing SEC survey, management assigns this to issues related to the purchase accounts. Following an internal survey, Kraft Heinz previously reversed recorded $ 25 million savings in Q4. Despite this, it does not appear to be a pervasive problem, given the small size, in relation to the cost base. Nevertheless, we should place great emphasis on the quality of the accounts.

Put all this together

Independence for thought is fundamental to sound investing, but we can learn a lot from other major investors. One of my favorite strategies is to follow very successful investors and wait for the opportunity to buy one of their holdings at a substantial discount on what they paid – especially if the thesis seems to be playing out. Mohnish Pabrai has said several times to himself that he is a shameless clone, and it works very well for him.

In this case I would not just jump on this opportunity. Good investment opportunities may be due to the misunderstanding of short-term and long-term horizons. I just think the future may not be as bad as the current feeling suggests. Valuable, business with fantastic economy can be a bad investment if it is bought at too high a price and vice versa. Here's my math: The market value is $ 39 billion, the FCF can be $ 4 billion and net debt around $ 26-27 billion (let's take a center point) at the end of this year. So, we're talking about EV at $ 65.5bn, which translates to EV / FCF more at 16.4x. All in all, if I needed to distribute the capital in this environment, Kraft Heinz would be on my list, but I would wait for the better entry point. Therefore, I will wait to start the cloning strategy.

Enlightenment: I / We have no positions in any of the aforementioned shares and no plans to start any positions within the next 72 hours. I wrote this article myself, and it expresses my own opinions. I do not receive compensation for it (other than from Seeking Alpha). I have no business relationship with a company whose stock is mentioned in this article.