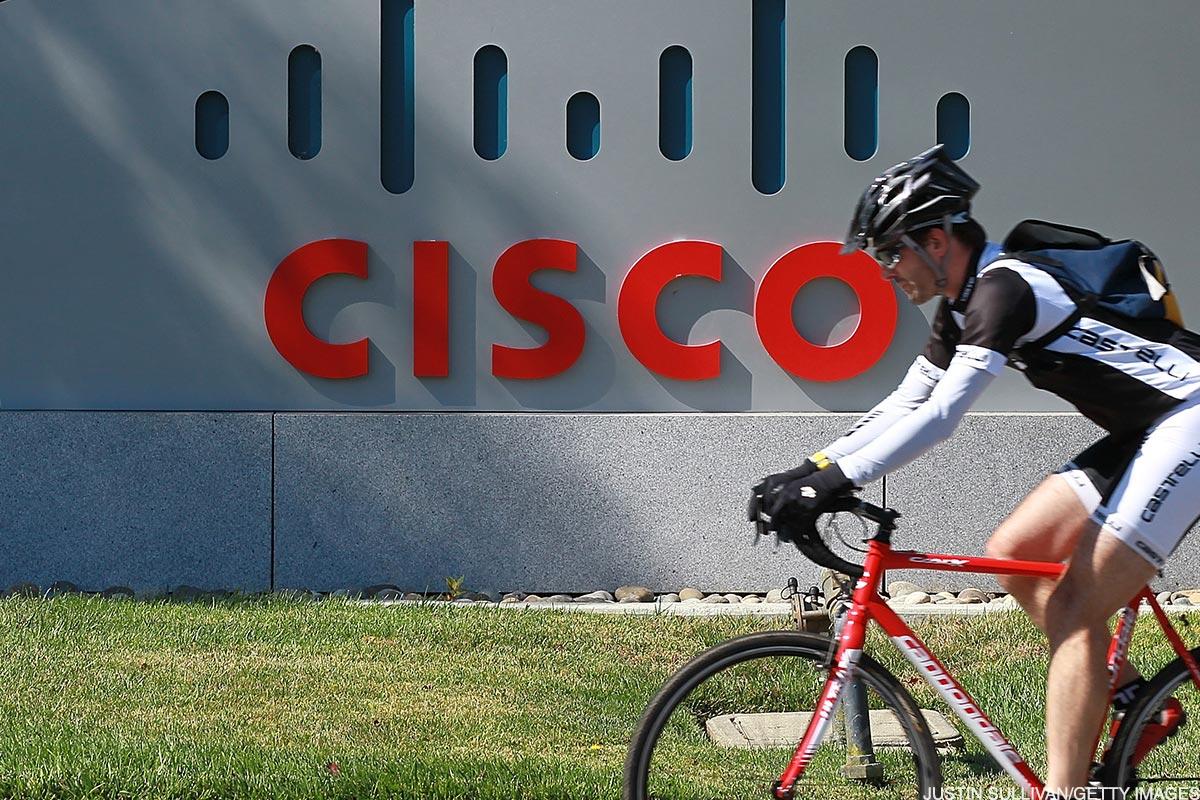 Macro and trading press did not push Cisco Systems (CSCO) far last year, and the company insists that demand remains healthy in the current quarter.

Following the clock on Wednesday, Cisco reported January quarter (fiscal second quarter) revenue of $ 12.45 billion and non-GAAP EPS of $ 0.73. Revenue was up 7% annually after backing in late October sales of Cisco's service provider video software business, and slightly topped a $ 12.42 billion consensus. EPS grew 16% and turned a little on a $ 0.72 consensus.

Cisco is a stake in Jim Cramers Action Alerts PLUS Charitable Trust Portfolio . Want to be notified before Cramer buys or sells CSCO? Learn more now .

For the quarter in the quarter, Cisco advises that revenues should increase by 4% to 6% after supporting the video software sales, and that EPS should be in the range of $ 0.76 to $ 0.78. This is consistent with a consensus of 3% official revenue growth and EPS of $ 0.76.

In addition, Cisco once used the quarterly report to announce new capital returns. The quarterly dividend was hiked by $ 0.02 to $ 0.35 per share (representing a 2.8% stake), and $ 1

At the time of this article, Cisco is up 4% in retrospect at $ 49.40, leaving stocks close to a 52-week high of $ 49.47. Although Cisco's top line growth remains moderate, a low valuation and better than expected product sales and orders (more on those short) contribute to dividing the rally by earnings. Cisco entered into revenue trading for 14 times a fiscal 2020 (ending in July 2020) EPS consensus of $ 3.32.

Here are some remarkable shopping centers from Cisco's report and conversation.

1. Order growth was once more solid

For the second quarter in a row, Cisco's product orders increased 8% annually, at least after being adjusted for sales of the video software. Corporate orders, which benefit from a generally healthy IT spending environment, rose 11%. Orders from the public sector increased by an impressive 18%, commercial (SME) orders increased by 7% and orders from supplier suppliers (the pressure for a while with slow telecom development and Cisco's relatively limited exposure to shadow giants) fell 1%.

Product orders also rose in all three Cisco's geographical reporting segments, with the EMEA (up 11%) the strongest of the gang. 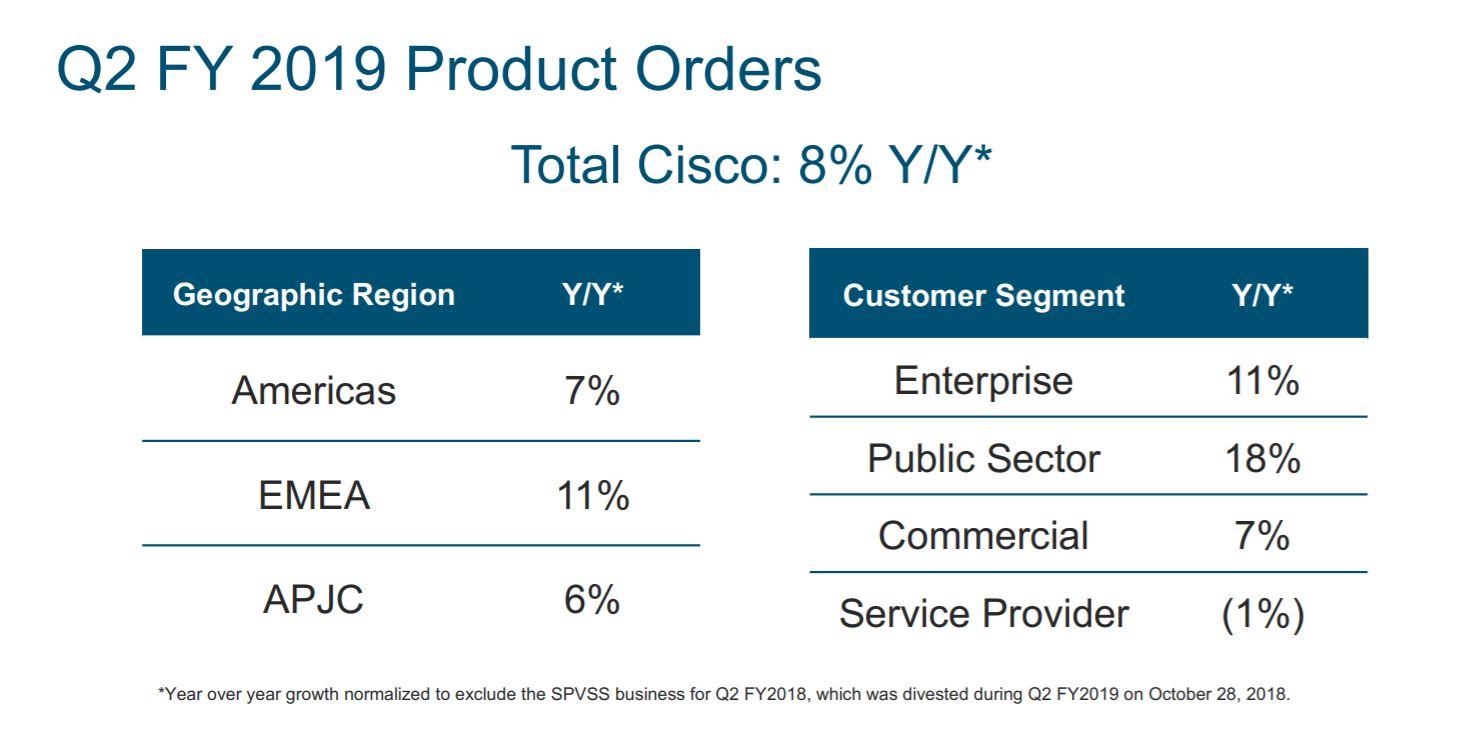 2. Hardware and software sales were better than expected

Cisco's total product revenue (hardware and software) increased by 6% to $ 9.27 billion, peaking at $ 9.15 billion in consensus. What more than offset Cisco's lower revenue than expected services, which are heavily linked to maintenance and support revenue streams and increased by only 1% to $ 3.17 billion.

Outside the video device unit, product sales increased 9%. Revenue "Infrastructure Platforms", which covers most of Cisco's hardware sales, increased by 6% to $ 7.13 billion and hit a 7.07 billion consensus. CFO Kelly Kramer noted the change-over call, which continues to benefit from a healthy sales pitch for the Cisco Catalyst 9000 campus switch line (launched in mid-2017, supporting Cisco's innovative DNA software platform), up by a two-digit percentage, as well as wireless sales (mainly Wi-Fi offers). The compensating routing and server decreases.

Security revenue rose 18% to $ 658 million, and hit a consensus of $ 629 million. A strong IT security spending environment, Cisco's internal software investments and its latest $ 2.35 billion acquisition of authentication software and services firm AppDynamics seem to have helped everyone.

Thanks to organic growth, a recent accounting change and $ 1.9 billion for the acquisition of Unified Communications Software firm BroadSoft (closed in February 2018), application revenue increased 24% to $ 1.47 billion, beating 1.35 billion US dollars. consensus. Kramer mentioned that 65% of Cisco's software revenues came from subscriptions, up from 55% a year ago, and that the company now has over 31,000 deals for its comprehensive Cisco ONE software licensing packages.

3. Cisco is not too worried about macro printing

Although Cisco (like other US multinational corporations) sees softness in any emerging market due to currency and / or pressures, its total growth markets increased by 6% with orders from the BRIC economies and Mexico is up 2%. Chinese orders were roughly flat among slowing economic growth and increasing trade tensions.

CEO Chuck Robbins admitted that Cisco is dealing with "one of the more complex macro geopolitical communities" his firm has been watching for a while. But he insisted that the company "so zero in" the demand trends from the beginning of the January quarter to the end.

Robbins also insisted that businesses are still eager to make big IT investments. "[Enterprises] does not see this technology more as an optional facilitator for a strategy they have come up with," he said. "They now see the technology as a central part of their strategy … Many of the things they are trying to do about simplification and cost reduction and productivity in the IT infrastructure, as well as being able to handle this new multifunction -clear world that is super-complex, I mean , they can't just stop. "

4. Controlled spending on expenses and lower memory are lifting revenues

As was the case in the October quarter, Cisco's non-GAAP operating expenses rose only 3% annually. And the company's non-GAAP gross margin (GM) came in at 64.1%, down from 65.1% a year ago – Kramer says it was a 1-point impact from price erosion – but slightly above the center of Cisco's guidance.

In particular, for a quarter-quarter GM, Cisco leads 64% to 65%, up from 63.9% the year before. Lower DRAM prices have a lot to do with the outlook: After holding a blast in the January quarter, DRAM prices are expected to be a haul in April and July quarters.

With Cisco just $ 15 billion in its repurchase approval, and with the company both holding over $ 13 billion in net cash (cash less debt) and expected to produce over $ 15 billion in free cash flow over the next 12 months , the company should have little trouble continuing to make major buybacks, at least assuming it does not splurge for a really big acquisition.