قالب وردپرس درنا توس
Breaking News
Home / Business / Christine Lagarde on the world economy: We are all in this – 60 minutes

Christine Lagarde on the world economy: We are all in this – 60 minutes 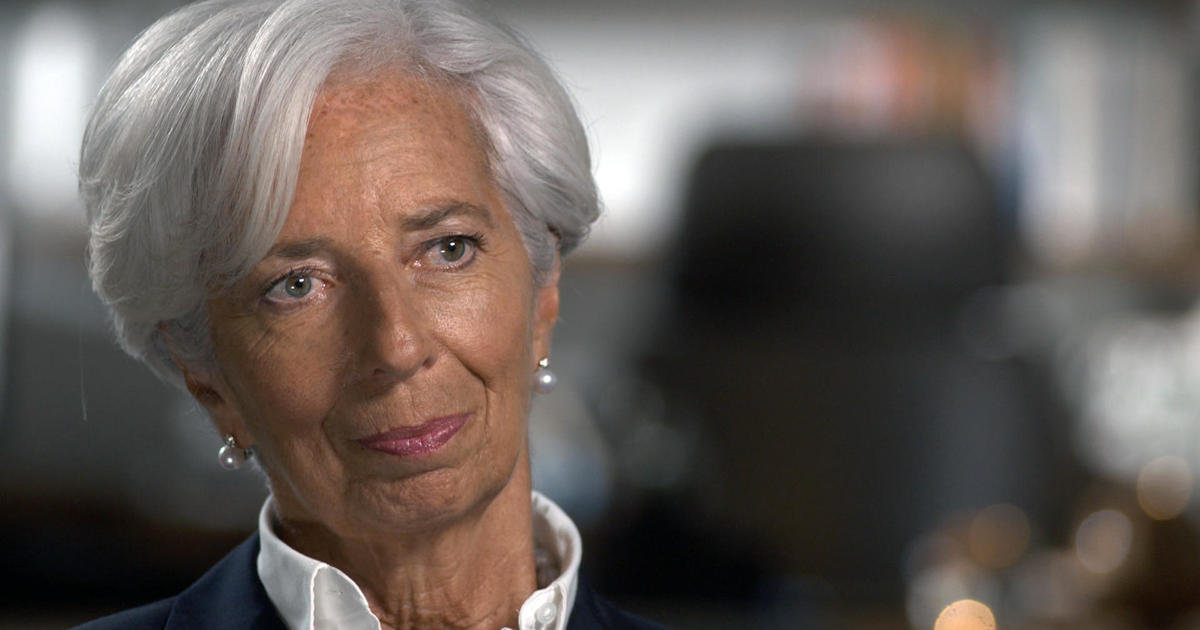 With the world economy at risk of recession, the man for the job is a woman. Since 2011, Christine Lagarde has managed emergencies as head of the $ 1 trillion International Monetary Fund. Before that, she was France's finance minister during the Great Recession. In November, she takes on a new crisis as president of the European Central Bank, trying to keep the world's second-largest economy stable as it is struck by trade war, Brexit and historical uncertainty.

Last month, we spent time with Lagarde in France and Washington D.C. during a rare break between jobs. She was surprisingly sincere about the danger of a global recession, the threat of nationalism and what she says is a major question mark in the global economy, President Donald Trump.

John Dickerson: When you think about the challenges facing the global economy, where is Donald Trump on that list ?

Christine Lagarde: I think he has many keys that would unlock uncertainty and risk.

John Dickerson: What are some of these keys he has?

Christine Lagarde: I think the biggest key President Trump has is in predictability and security of trading conditions. It is the unknown that hurts, because you cannot adapt to the unknown. So what are you doing? You build buffers. You build savings. You're wondering what's next. It is not favorable for economic development.

Christine Lagarde: Yeah, they're on the money.

The International Monetary Fund, led by Christine Lagarde for eight years, says the instability caused by the US-China trade war is the main reason why global growth is projected to fall this year at its slowest pace since the 2008 financial crisis.

Last week, President Trump announced preliminary steps for a partial agreement with China. But the biggest and toughest cases remain.

John Dickerson: The US-China trade war, is it possible that it could tip the global economy in the wrong direction?

Christine Lagarde: It will certainly give a great haircut to the global economy. And if you shave yourself, you know, almost a percentage point of growth that means less investment, less jobs, more unemployment, reduced growth. So of course it has an impact.

Christine Lagarde: My very, very strong message to all decision makers is to put you down as big men, many men in these rooms and put everything on the table, and try to cope a little bit eventually, so we have security.

Christine Lagarde has spent her career telling men what to do. And she will continue to do so as the first woman to lead the ECB, the European Central Bank. It's like the US central bank, but for 19 countries known as the eurozone.

Last month, Lagarde invited us to visit her in Normandy, France, near where she grew up.

John Dickerson: Across the UK, they are in the middle of Brexit. What does Brexit mean to you?

Christine Lagarde: For me personally, it is a source of great sadness. And to see them drift away from the EU is sad.
At the ECB, Lagarde will be tasked with keeping Europe, the world's second largest economy, afloat in the middle of Brexit.

John Dickerson: What will the fallout be financially?

Christine Lagarde: It will affect both the UK and some EU countries, especially Ireland, Germany, the Netherlands. And everyone will be a little less benevolent as a result.

John Dickerson: Why is it important for Americans if the EU is to thrive?

If there is a core belief that guides Lagarde's life, and her financial view, it is that "we are all in this together."

Christine Lagarde: You know, when I was growing up I think there was a great appreciation to the Allies, the Americans …

It was here on Omaha Beach where Americans landed on D-Day in 1944.

Today, Lagarde hears echoes of anger that led to World War II, with nationalists t leaders turning their countries inward, pushing everyone else away.

Christine Lagarde: Nationalism in Europe is associated with very, very terrible developments that always led to war.
President Trump at the Rally: You know what I am? I am a nationalist. OK.

John Dickerson: President Trump has called himself a nationalist. He is proud of the nationalist brand. This is a great debate. This is the central debate, you could argue, on the global stage when countries decide, "Maybe this idea of ​​interconnection is not that great."

Christine Lagarde: International trade, relations, movement of people and movement of capital have taken hundreds of millions out of poverty. Now, in the advanced economies, someone might say, "Phew. What do I care?" Well, of course we care about the person next door. And because of the interconnections, the neighbor is not down the track, the neighbor is everywhere in the world. And if my neighbors from across a border feel desperate, hungry, fighting, it will have consequences at home.

John Dickerson: Do you think the president who believes in masonry gives a strong argument to people who make the opposite case from the one you make?

But this message asks for people who do not want global bureaucrats like the IMF who tell them how to live their lives and who believe leaders like Lagarde are elitist and out of touch.

John Dickerson: What happens, though, when someone says, "Madame Lagarde, you are the global elite?"

Christine Lagarde: I think I am also a very ordinary, down-to-earth person, and I am proud to participate in the intellectual efforts we put in to achieve stability financially so that people are protected. People are safer.

At the European Central Bank, Lagarde is facing weak growth spurred by a decline in production, which creates fears of a European recession.

Lagarde's main tool for stimulating the economy, lowering interest rates, can be useless. That's because, in Europe, interest rates are already negative – which was once unthinkable.

John Dickerson: So it's a bottom?

Christine Lagarde: It's a bottom for everything, but we're not down to this point in time.

President Trump likes the idea of ​​low, even negative, interest rates. So much so that he has spiked the decades-long tradition that the presidents do not interfere with the Federal Reserve, even calling the chairman, Jerome Powell, and his colleagues "bone heads" not to cut prices.

Lagarde's advice to the president? Be careful.

Christine Lagarde: When unemployment is 3.7%, you will not accelerate it too much by lowering interest rates. Because the risk you take is that then prices start to go up. You have to be very careful. You know, it's like navigating an airplane. And you have to look at everything, altitude, speed, wind. And that's what a central banker has to do.

John Dickerson: If you are a pilot looking at all the delicate measures, do you want a leader behind you who says you are a bonehead?

Christine Lagarde: A central bank governor does his job best if he is independent.

John Dickerson: You have met President Trump, would you talk to him about this, and have made the case you have had about the independence of central banks?

John Dickerson: And what would you say?

Christine Lagarde: Market stability should not be the subject of a tweet here or a tweet there. It requires consideration, thinking, quiet and measured and rational decisions.

And for these qualities, Lagarde instructs, bring in the women. They are better at judging risk, she believes, and famously say that if the investment bank Lehman Brothers, which triggered the 2008 financial crisis, had been "Lehman Sisters", the whole mess could have been avoided.

Christine Lagarde: Do you know how many women are banks president? Two percent. This is ridiculously small because women all over the world, in most families, women usually handle the money. And they do pretty well. There is a clear connection between good, solid management, good attitude towards risk and the number of women on the board and the main boards.

Christine Lagarde: Poverty is sexist and we have to remember that and make sure women are not forgotten.

Now 63, Lagarde has become a global force. Not just for what she says about women, but because she acts after it. For the first time in its history, Lagarde has secured IMF loans to improve conditions for women in countries such as Argentina and Jordan.

And look at what the IMF staff looks like now. Under Lagarde, the proportion of women working in the IMF has grown to 44%.

She is charming but demanding. Lagarde has locked the conference room's doors and has not allowed anyone to leave until agreement is reached. And she has announced that she will not attend meetings where she is the only woman in the room.

John Dickerson: You once described yourself as a boss. You know, bossy is now a dirty word.

Christine Lagarde: You know, sometimes you have to be a boss.

John Dickerson: Is it a French form of bossy? It feels like a very American word.

As volatile as the global economy may be, Lagarde is not. She is controlled, even on vacation. Back home in Normandy, she gave us an insight into how finely calibrated that control is.

John Dickerson: You've learned how to pretend to drink wine when you're not drinking wine.

John Dickerson: How do I pretend to drink wine but not drink it?

Christine Lagarde: Oh ok, I'll show you. I'll do it with water. So you go. You have to smell. Terribly important. Then you go, move it around to check the color. Then you go very important. Watch this, here you go. I didn't drink anything.

John Dickerson: It's dangerous. You're going to keep your mind off it.

The glasses were raised weeks later to honor Lagarde's time at the IMF. She said goodbye to an institution formed in America to ensure global cooperation. As she embarks on her new job, she worries that the country that has helped maintain stability over her lifetime may now be what is weakening it.

Christine Lagarde: I was raised as a citizen of this world. The risk I see is that the US risks losing leadership. And that would just be a terrible development.

Christine Lagarde: Because it has been a force for good, and for the principles I respect highly: the rule of law, democracy, the free market and the concern of the individual, and – and respect .

It is the same message that the Allies sent to the world 75 years ago on these latitudes: we are all in this.