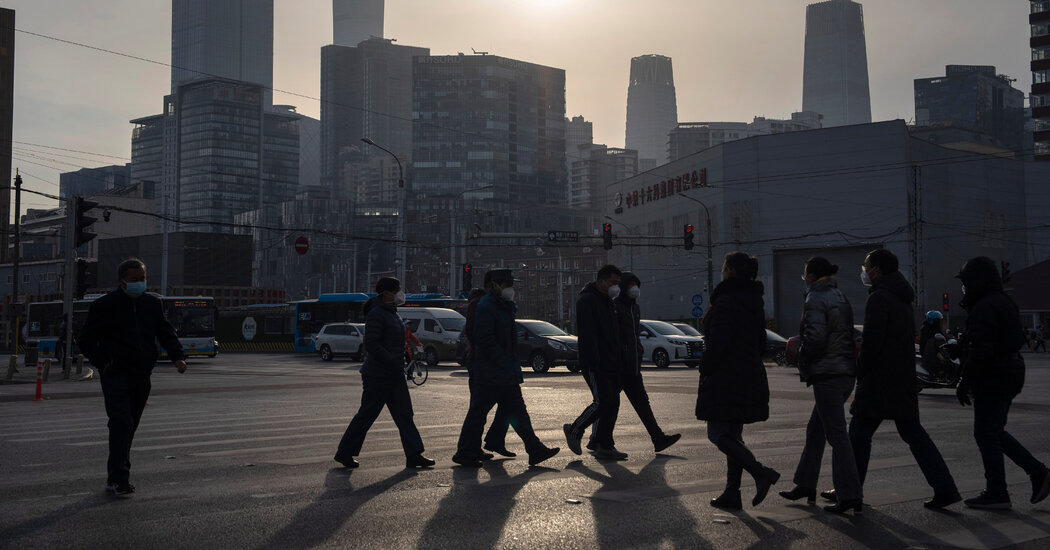 The world’s most populous country has reached a pivotal moment: China’s population has begun to shrink, following a steady, years-long decline in the birth rate that experts say will be irreversible.

The government said on Tuesday that 9.56 million people were born in China in 2022, while 10.41 million people died. It was the first time deaths outnumbered births in China since the early 1960s, when the Great Leap Forward, Mao Zedong’s failed economic experiment, led to widespread famine and death.

Births decreased from 10.6 million in 2021, the sixth year in a row that the number fell. This decline, combined with a prolonged increase in life expectancy, is pushing China into a demographic crisis that will have ramifications this century, not just for China and its economy, but for the world, experts said.

“In the long run, we’re going to see a China the world has never seen,” said Wang Feng, a professor of sociology at the University of California at Irvine who specializes in Chinese demography.

“It will no longer be the young, vibrant, growing population. We will begin to appreciate China, in terms of population, as an old and shrinking population.”

Understand the situation in China

The Chinese government scrapped its restrictive “zero Covid” policy, which had sparked mass protests that were a rare challenge to the Communist Party’s leadership.

The news comes at a challenging time for the government in Beijing, which is dealing with the fallout from the sudden reversal last month of its zero-tolerance policy on Covid.

Over the past four decades, China has emerged as an economic powerhouse and the world’s factory floor. This transformation led to an increase in life expectancy that contributed to the current situation – more people are getting older while fewer babies are being born. By 2035, 400 million people in China are expected to be over the age of 60, accounting for nearly a third of the population.

This trend is accelerating another worrying event: the day when China will not have enough working-age people to fuel the high growth that made it an engine of the global economy. Labor shortages will also reduce tax revenues and contributions to a pension system that is already under enormous pressure.

The result, some experts have argued, could have implications for the global order, with India’s population poised to outgrow China’s later this year, according to a recent UN estimate.

This moment was not unexpected. Chinese officials admitted last year that the country was on the brink of a population decline that would likely begin before 2025. But it came faster than demographers, statisticians and China’s ruling Communist Party had expected.

Officials have taken steps to try to slow the decline in births. In 2016, they relaxed the one-child policy that had been in place for 35 years, allowing families to have two children. In 2021, they raised the limit to three. Since then, Beijing has offered a range of incentives to couples and small families to encourage them to have children, including cash handouts, tax cuts and even property concessions.

Along with Japan and South Korea, China has one of the lowest fertility rates in the world, below what demographers call the fertility replacement rate required for a population to grow. That number would require each couple to have two children on average.

So far, the government’s measures have failed to change the underlying fact that many young Chinese simply do not want children. They often cite the ever-increasing costs of raising them, especially with the economy in a precarious state.

Rachel Zhang, a 33-year-old photographer in Beijing, decided before she married her husband that they did not want children. Sometimes elders in the family nag them to have a baby.

“I am determined on this,” Zhang said. “I never wanted to have children all the time.” The rising costs of raising a child and finding an apartment in a good school district have hardened her resolve.

Other factors have contributed to such reluctance to have more children, including the burden many younger adults face in caring for aging parents and grandparents.

China’s strict “zero Covid” policy – nearly three years of mass testing, quarantines and lockdowns, which resulted in some families being separated for long periods – may have led to even more people choosing not to have children.

Luna Zhu (28) and her husband have parents who are willing to take care of their grandchildren. And she works in a state enterprise that provides a good maternity leave package. But Zhu, who got married five years ago, is not interested.

“Especially in the last three years of the epidemic, I feel that many things are so difficult,” Zhu said.