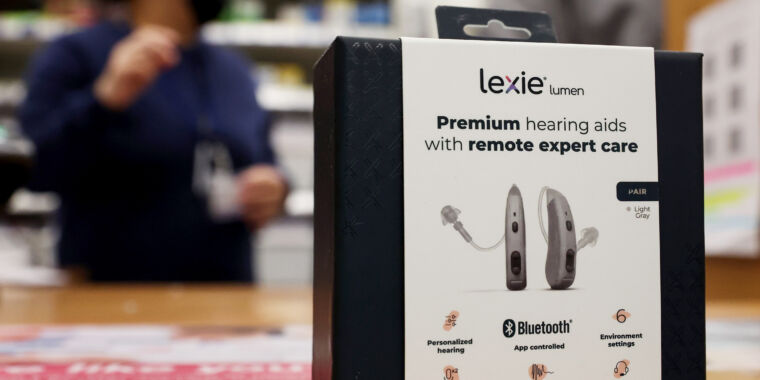 Today, Americans can purchase cheaper hearing aids for mild to moderate hearing loss without a prescription from a number of mainstream retailers, including Walgreens, CVS and Walmart – finally making the critical health devices more affordable and accessible to the estimated 28.8 million adults who could benefit from them.

The US Food and Drug Administration estimates that the change could reduce the average cost of obtaining a hearing aid by as much as $3,000. As of today, Walgreens sells an over-the-counter model similar to hearing aids that range from $2,000 to $8,000 per pair at specialty retailers for just $799 per pair on the shelves, the White House said Monday. Similarly, Walmart said that as of today, it sells over-the-counter hearing aids from $199 to $999 per pair, which compares to prescription hearing aids priced at $4,400 to $5,500 per pair.

The move is years in the making. In 2017, Congress passed a bipartisan proposal directing the FDA to set rules for the sale of over-the-counter devices. But the rules came slowly. In July 2021, President Biden signed an executive order spurring the FDA to produce the rules, which the agency finalized in August of this year.

“Hearing loss is a critical public health problem that affects the ability of millions of Americans to effectively communicate in their daily social interactions,” FDA Commissioner Robert Califf said in August. “Establishing this new regulatory category will allow people with perceived mild to moderate hearing loss to have convenient access to a range of safe, effective and affordable hearing aids from their neighborhood store or online.”

In the past, the barriers to hearing aids were high for many Americans. They required a medical examination and for patients to obtain a prescription or be fitted by an audiographer.

The Hearing Industries Association, a trade group representing hearing aid manufacturers, previously worked to undermine the effectiveness of new over-the-counter devices, according to a congressional investigation. Although the HIA now says it supports the rule, it is still pushing for people to seek specialist treatment to diagnose hearing impairments and fit and use devices.

“Hearing loss is unique to each person, and most people don’t know whether their condition is mild, moderate or major, caused by another medical problem or something as simple as earwax,” HIA president Kate Carr said in an August statement. “HIA supports the final rule and recommends that the best treatment for hearing loss involves seeing a hearing specialist.”

While independent experts noted that there is nothing wrong with consulting an expert for those who can, they also said that consumers could navigate the situation on their own. There are also online resources to help people through the process. For example, the Hearing Loss Association of America, a consumer group, provides a tip sheet on who can evaluate an over-the-counter hearing aid and what features to look for when buying one. Tips for the latter include looking for generous return policies, convenient connectivity, adjustable gain, water/sweat resistance, and a long-lasting or rechargeable battery.