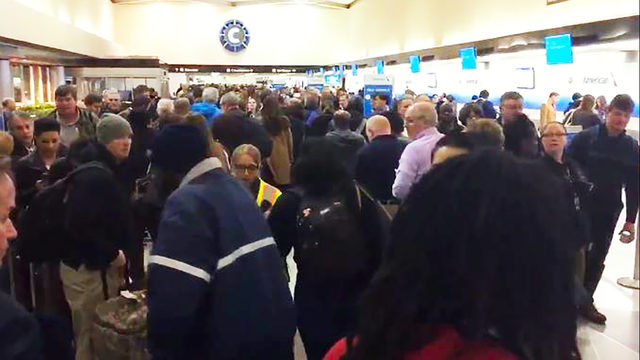 CHARLOTTE, N.C. ̵[ads1]1; Airport officials have still not said what the safety cream was about Monday morning at Charlotte Douglas International.

The airport tweeted at 6am, all control security administrations in Transportation Security were closed due to a security inspection. Five minutes later, the airport ran an update that said the checkpoints were open again.

Channel 9 reporter Mark Barber was at the airport all day and learned a little more about what happened.

Passengers told him agents searched for a man with a bag, but TSA officials did not respond to requests from Channel 9.

Update: The inspection is complete. All @TSA control points are open.

Traveler Joy Williams once said she did it through security, she saw agents seeking someone.

"After we had gone through TSA, we had heard that they were looking for a white man in his 40's or 50's who had a bag," Williams said. "It was pretty scary. There were many people, yes it was quite intense."

Channel 9 attempted to call TSA, but was directed directly to a voicemail message saying that they still cannot answer calls due to lapse in federal funding with the government's suspension.

American Airlines said the man in the center of the security hazard was ordered on a plane in Concourse E.

Travelers who had to force in massive lines out in the ticket area while agents searched for the man told Channel 9 that they were happy to wait when they learned why the checkpoints were closed.

Here is a tour through the safety lines at Charlotte Douglas. Many travelers are on the verge after TSA has turned off all checkpoints.

TSA doesn't say why it closed every checkpoint yet. The airport calls it just a security check right now. @wsoctv pic.twitter.com/4hC53kGOVu

"I'm in a much better mood waiting in line now as I know why, I'd rather wait, but don't, "said traveler Ann Eyrich. "It makes your mind safe. They do their job."

Travelers said when the man was taken, all the checkpoints opened again.

Then hundreds of travelers were packed into the ticket area in lines as long as the crowd stretched from one side of the building to the other.

Confused travelers who got stuck in the crowds said they are still spooked by checkpoint shutdown.

Hundreds of frustrated travelers are waiting in these massive lines at Charlotte Douglas. TSA shuts down all control points earlier.

Passengers tell us that agents were looking for a man with a bag. TSA does not say anything so far, but they have reopened the control points. @wsoctv pic.twitter.com/GjxOrlVHgL

Passengers said that the time of the incident was what was most surpsising. The government closing is over now, so travelers said they thought they wouldn't have to worry about TSA.

American Airlines reported that anyone who was sitting in the crowds caught their aircraft on time.

The airline said the only exceptions are the passengers who were supposed to be on the same plane in Concourse A as the man in the middle of security frightening.

>> Channel 9 continues to reach the TSA to find out if there was a security risk at the airport and wants updates tonight at 5.